This year you’ve got two Adelaide Fringe shows – one for adults and one for kids (Noodlenut). What are the added challenges of working with an audience of small people?

I’ve just finished the first season of Noodlenut at the Melbourne Arts Centre, and I’m happy to report that I couldn’t have felt more at home.

The show’s aimed at kids 8+ and it turns out that I can relate to them perfectly well, possibly even a little easier than to adults.  For example, I have a routine where I try to get a slippery mango pip into the bin and it’s got a mind of its own.  I tried this routine to adults a few years back and they were a bit luke-warm, but the kids just howl.  And I feel like “Yeah, that’s what I reckon. Finally an audience that understands me.”

What exactly is a Noodlenut and what can kids (and their parents) expect from that show?

I move back and forward between bits of stand-up for kids, like the time I accidentally went nude at show-and-tell, or my frustrations with the rules of Tiggy (maybe you call it Tag or Chasey) – Who came up with the concept of mid-game calling “Pause”?  There’s no “Pause”.  You can’t “Pause”!

And an epic tale about a monkey called Noodlenut who saves his community from a giant python running a protection racket.  That part of the show has about a hundred projected images that I illustrated. 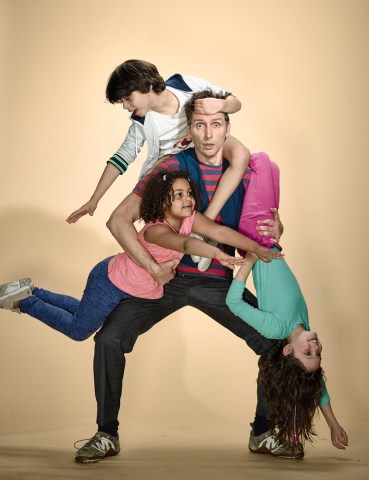 Sometimes you’re performing the G and PG-rated shows on the same day – doesn’t that raise the risk of a material mix-up?

I haven’t done it yet so I’m not sure.  There’s a cricket story in my adult stand-up show about a time I was batting, and the bowler tried to intimidate me with bouncers, so I tried to psych him out by blowing him a kiss, and he called my bluff by waving his bum provocatively … and things escalated with neither of us wanting to back down and we ended up having wild sex on the pitch out of pure recalcitrance.

If I accidentally slip that story into Noodlenut, I imagine there’ll be some letters.

The adult show is called Extra Ordinary, which seems to promise something, well … extraordinary. What kind of topics will you be delving into?

It’s very physical stand-up, roaming across all sorts of nonsense. The Georgian fashion of men in little white wigs, the time I threw a water balloon into a toddler’s face and the balloon didn’t break, under-nines football, the pointlessness of earlobes, the difference in perceived value of moths and butterflies.  And probably quite a bit of stuff I’ll come up with between now and then.

Over all the years you’ve performed at Adelaide Fringe, what’s the funniest experience you’ve ever had?

That’s hard.  For some unknown reason, the event that has sprung to mind is the time in the early ’90s when Col (Colin Lane) and I booked into a backpackers’ in Hindley Street, and there were two rooms available: one without a window, and a more expensive one with a window.

Col jumped on the windowed room.  When I visited his room, the window opened onto a brick wall that was, and I must stress that this is absolutely without exaggeration, two inches from the window.  The only benefit it offered was the additional aroma of the rats that had become fatally stuck between the two buildings.

I can vividly remember lying on the carpet crying with laughter.

Frank Woodley will perform his children’s show Noodlenut in The Factory, Garden of Unearthly Delights, on February 13-14 and 20-21. His adult show, Extra Ordinary, will be at the Arts Theatre from February 12-21.