Titled An Evening with Annabel Crabb, the one-off event will be presented at the Festival Theatre on February 14 and will see the host cooking with her guests on a kitchen/lounge-style set while talking to them about their lives.

The guests haven’t yet been confirmed, but Crabb tells InDaily they will likely be a mixture of politicians and other well-known identities.

“I’ve done lots of events where I have conversations with people and one thing that surprises me is how interested people are in conversation,” she says.

“I think that conversation between two or more people can be a really engaging form of entertainment, especially if it’s entered into in the right spirit.

“What I enjoy most about Kitchen Cabinet is that you get to walk into people’s houses and all of a sudden you are talking about their lives and what makes them interesting.

“This is my attempt to see if it works on stage.”

Crabb, who was born in rural South Australia, is a Walkley Award-winning journalist who worked for publications including The Age and the Sydney Morning Herald before becoming chief online political reporter for the ABC.

For the past three years she has also been hosting Kitchen Cabinet, in which she visits the homes of politicians, shares a meal with them, and talks to them about their careers and personal lives. Past participants have included Clive Palmer, Bill Shorten, Bronwyn Bishop, Tony Abbott, Malcolm Turnbull, Penny Wong and Kevin Rudd.

The latest series of the TV show begins on ABC1 tonight with Crabb visiting Scott Morrison, who previously served as federal immigration minister and then social services minister before being appointed Treasurer by new Prime Minister Malcolm Turnbull.

“He’s such a controversial figure but not much is known about his early life,” she says.

“His childhood is really interesting and explains a lot about him. He has quite a good sense of humour as well, which people wouldn’t spot.”

Liberal Minister Christopher Pyne and Labor MP Anthony Albanese will take part in what Crabb describes as the show’s first bipartisan lunch, making dumplings at a Chinese restaurant. “They have perfected the art of being at war but having fun at the same time,” she says of the pair.

Crabb is a keen cook who will next month launch her new cookbook Special Delivery, co-authored with her friend Wendy Sharpe. But she says Kitchen Cabinet isn’t really about cooking; preparing a meal simply helps put participants at ease and forget that there are cameras pointing at them. The result is a relaxed conversation with a blend of humour and profundity.

The stage show, too, might offer some serious insights, but most of all she says it will be fun.

“I think people at a Fringe show are looking for a funny, entertaining and a bit of a madcap night out.

“There’s something so electric and fabulous about being in Adelaide in Mad March and I just feel like if you’ve moved away and you come back, you notice so much more the things that have changed … I feel so proud and I love showing people around who are vising Adelaide for the first time.” 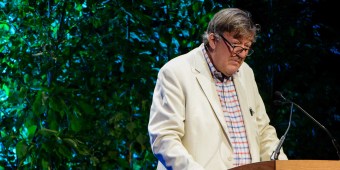 Crabb will be in Adelaide for a different kind of conversation at the Festival Theatre next month, when she interviews English writer, actor and TV host Stephen Fry in an event organised by the Don Dunstan Foundation to celebrate the 40th anniversary of the decriminalisation of homosexuality in South Australia.

Other 2016 Adelaide Fringe show announced today ahead of the full program launch on December 2 include: