Stephanie Lake’s near-perfect follow-up to the highly acclaimed Colossus confirms her status as one of Australia’s most idiosyncratic and exciting contemporary choreographers.

The audience is given a moment’s pause to take in the sight as the lights come up bright on stage: nine drummers in black with identical drum kits arranged in arched formation on a rostrum high above, the nine dancers in white sitting immobile on a row of black chairs below. The simple and effective stage design has the feel of a 1950s big band set-up, the smooth, dusty-rose-coloured drapes hanging from the drummers’ rostrum a backdrop for the dancers, the whole arranged in satisfying symmetry. All are poised, waiting. Then it begins.

It’s best not to be holding a glass of wine at this point. At a silent signal, the drummers beat out a single, perfectly synchronised, deafening crack of their toms – a detonation – and the dancers respond with a single, explosive move on their chairs. Freeze. A potent silence, suspense building, then again: Boom! and again, the dancers snap into new poses. Silence again, then crack! The dancers shift and hold. Another beat, then another, faster and faster, the dancers responding each time, until there’s a sense of everything breaking loose, the dancers burst out of the confines of their chairs, and the whole exhilarating hour begins. 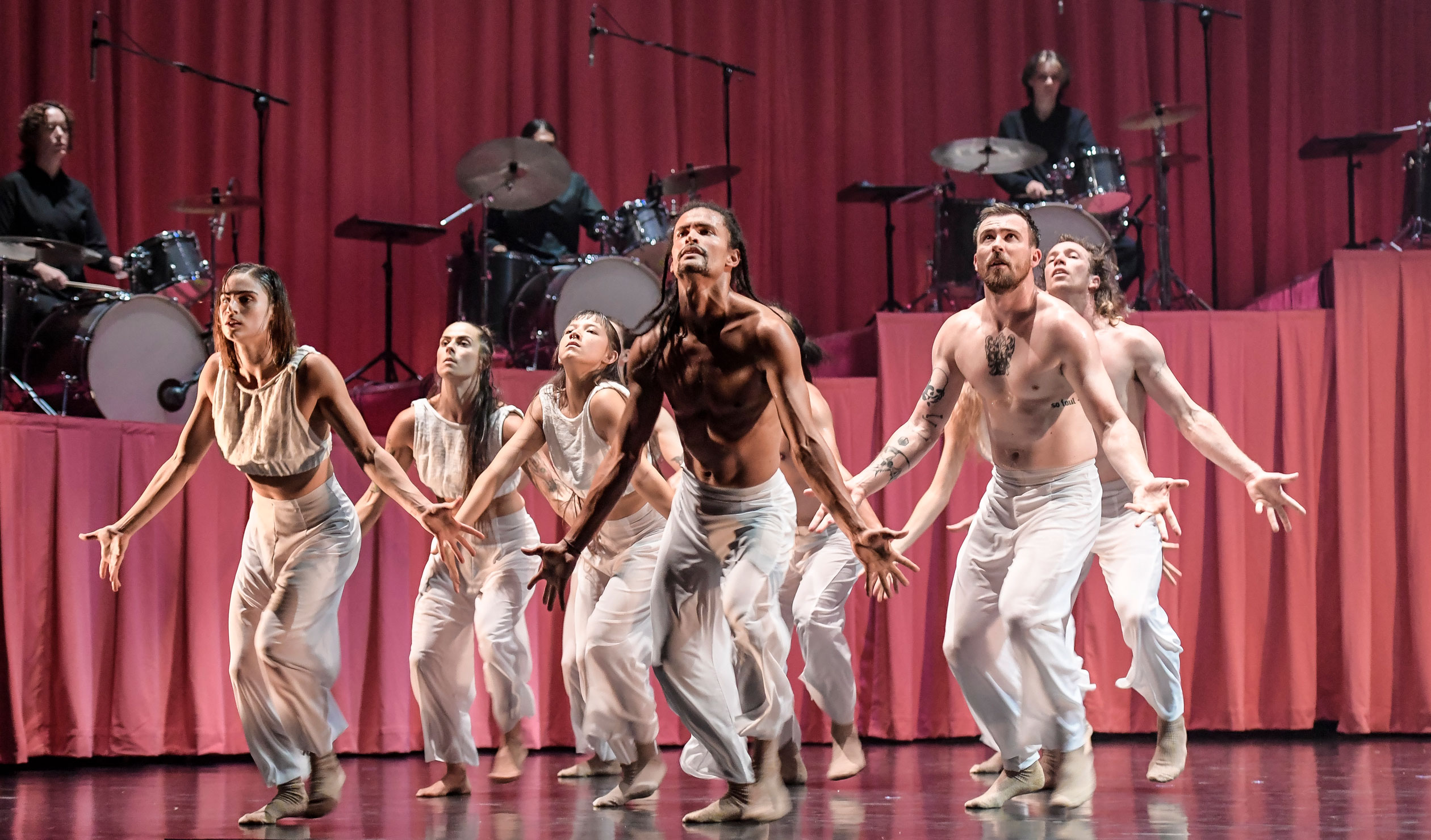 Manifesto: The energy and athleticism of the dancers is mesmerising. Photo: Roy Vandervegt

We are wired with rhythm, our first experience of it sensed in our mother’s comforting heartbeat in the womb. Scientists have long studied the neurological, therapeutic and psychosocial effects of drumming and dancing, with anthropologists tracing back the origins of our relationship with drum rhythms by millennia. From ancient shamanic rituals to 21st-century raves, drumming and dancing answers our human need for connection with one another, with our primal drive, and with a universal force greater than ourselves. Some cultures even hold drums as sacred objects that enable human connection with the spirits and the gods.

The drummers of Manifesto drive their syncopated rhythms like commands. The dancers respond, sometimes moving their bodies as if against their will, animalistic, and impulsive; other times as if they were letting rip at a party, whooping, full of joy and wild abandon.

The full-tilt energy and athleticism of the nine dancers, combined with their skilled technique, is utterly mesmerising; taut, body-popping moves alternating with melting, floppy drops to the floor as if they were AI humanoids suddenly deprived of a power source. Virtuosic ballet moves with spectacular barrel rolls, grand jetés and turns alternate with snaking waves of the hips or torso, accompanied by twitches, grimaces or grins.

At times the dancers act as a single organism, clustered together in dramatic tableaux, or stacked one on top of the other, arms moving in perfect symmetry, looking for all the world like a living Rorschach blot. Other times, the dancers interact with the drummers, nodding, smiling and chatting before crossing a threshold into another change of pace or mood.

Robin Fox’s composition in collaboration with the nine percussionists is a soundscape of unadulterated drumming, and Bosco Shaw’s lighting works with it in rhythmic interplay, by turns isolating a drummer or dancer in a spotlight, or fully illuminating the stage, as if removing any trace of artifice. 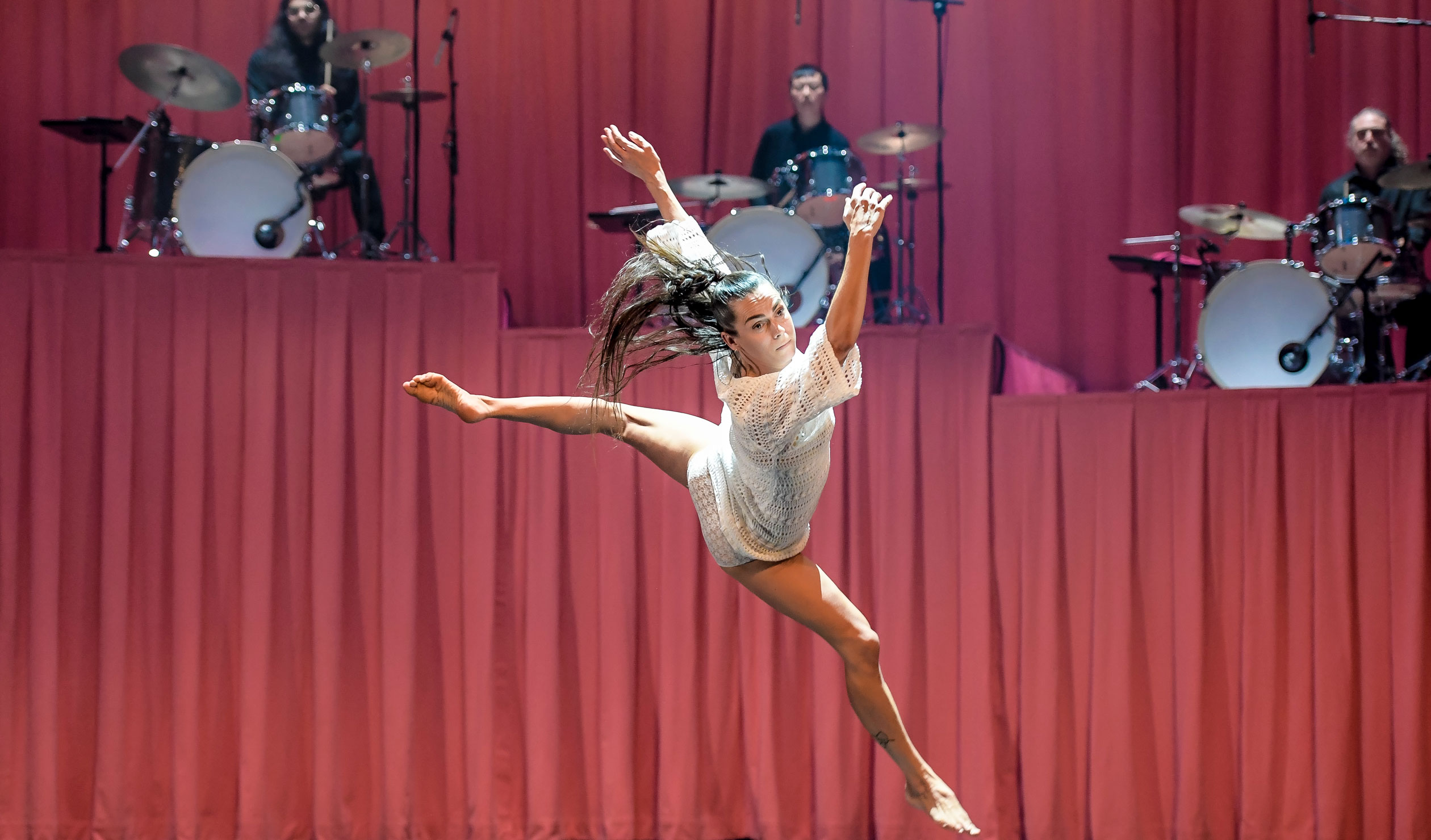 The dancers occasionally look searchingly into the audience, sometimes serious, sometimes smiling, always connecting. They unfurl the entire gamut of human emotion during their hour on stage; melancholic, internalised pulsing in response to heartbeat-paced drumming; an unleashing of wild abandon to a Brazilian batucada-style wall of sound; a joyful version of militarised marching reminiscent of drummers in a marching band on an American football field. The effect is enlivening, energising, and continues to build in intensity until the final climax of ecstatic mayhem, which concludes the performance in a huge and joyful release.

There’s a deep authenticity to the performance, as if the dancers are responding organically and instinctively to the beat, belying what was likely to have been an intense and exacting rehearsal schedule packed into moments when Melbourne was not in lockdown. There is an energetic transference of sorts to the audience, something lying beyond words or thought, creating an instinctive and visceral response to the energy of the dancers and the rousing drumbeats that make it difficult to sit still.

The sheer force of the soundwaves feels cleansing, purging. When Thursday’s performance came to an end, there was a moment of silence and then the audience was up on its feet, wild cheers and applause reflecting that transference of energy. There are times when ovations are given too freely, diminishing their potency, but this night it was thoroughly deserved.

Lake has called this work a “tattoo for optimism”, a play on the militaristic use of rhythm to rally the forces, but instead of drums of war, the drums of Manifesto are a unifying call to humanity that summons up a hope, and a fierce and righteous will to progress towards victory – something needed now more than ever.

Manifesto is one of those iconic performances that you’ll always remember experiencing. Go while you have the chance.

Stephanie Lake Company’s Manifesto is being presented at the Dunstan Playhouse until March 20.