The Chineke! orchestra was established in 2015 to champion change and diversity in classical music and, while it’s a pity the full orchestra couldn’t make the journey to Adelaide, last night’s Festival debut by an ensemble of 10 musicians was a memorable one.

Led by Chineke! founder, double-bassist Chi-chi Nwanoku, the players – sometimes arrayed as a quintet – presented a program true to the ensemble’s purpose, which is to create opportunities for black and ethnically diverse musicians. Nwanoku noted that no two pieces were by composers from the same cultural or ethnic background or country.

In addition, Chineke! commissioned two new pieces by Indigenous Australian composers. Last night, it was the premiere of “The Rising of the Mother Country”, by leading didgeridoo player, composer and singer William Barton, who joined the ensemble on stage. (Tonight’s program – Thursday, March 17 – includes a commission from Deborah Cheetham.)

Like much of the first half, this is a playful and melodic choice, with a nice interplay between the instruments. Chineke’s sound is big and full of expression, with a lovely French horn solo by Francisco Gomez notable here.

The following Quintet in G minor by Russian Sergei Prokofiev – well-known for his “Peter and the Wolf” and ballet Romeo and Juliet – is an intriguing follow-up, very resonant with the previous piece (the composers were alive in the same early-20th century period). Again the players each get their opportunity to shine and the overall ensemble is similarly exuberant in this exploratory piece which, while distinctively melodic in Prokofiev’s style, also experiments with innovative sounds for the strings in particular.

Rounding out the first half was contemporary American composer Valerie Coleman’s delightful “Red Clay and Mississippi Delta”, written for wind quintet. The players loved this – as did the audience – with its combination of virtuosic runs and melding of a number of American musical idioms, including the blues. 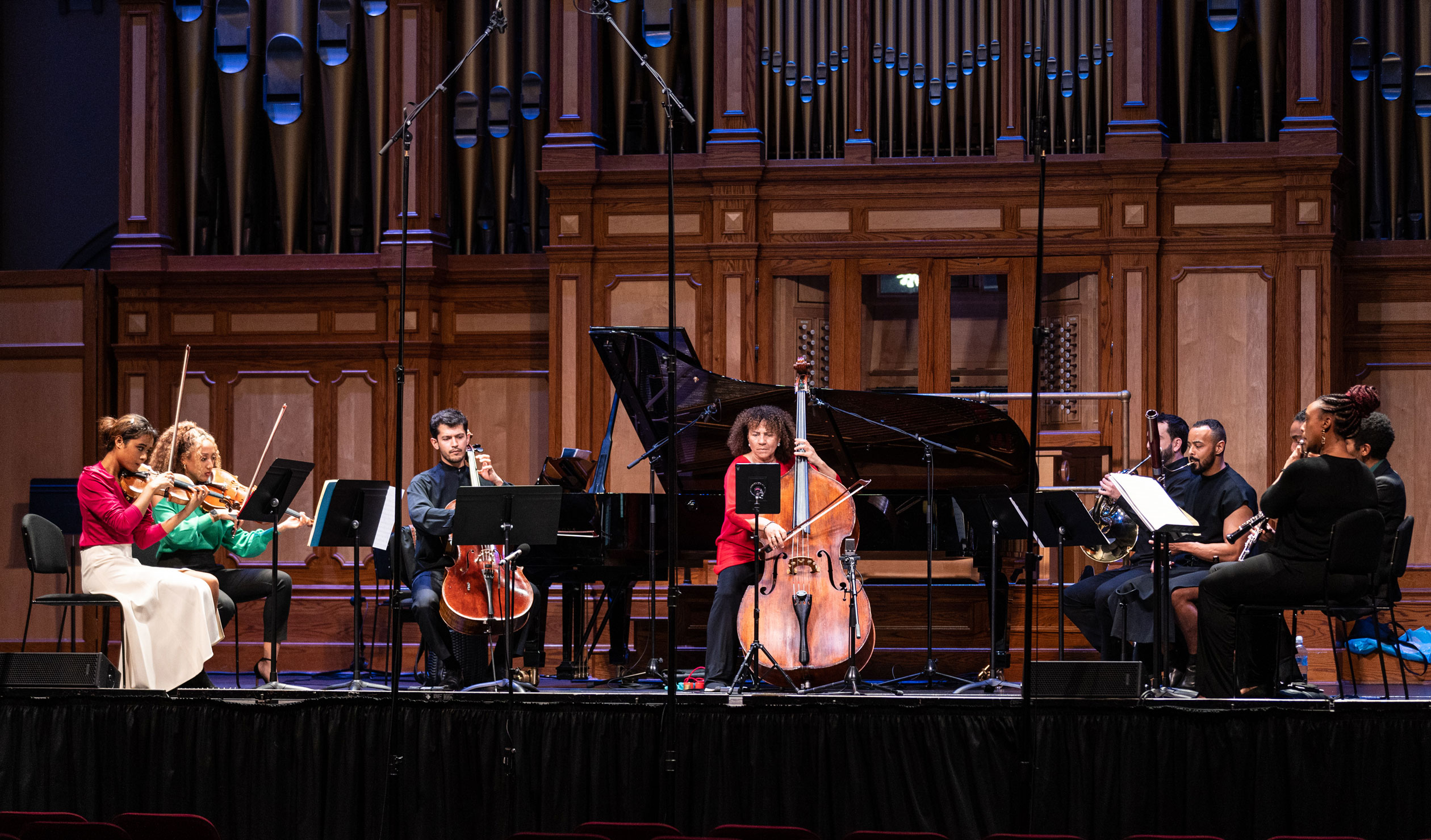 It’s been a big week for William Barton in Adelaide. On the weekend, he added his beautiful voice and didgeridoo playing to rock band Goanna’s WOMADelaide show, taking that performance to a new level. After the interval last night, he joined the ensemble to perform his commissioned work – a complex interplay of ideas from European and Aboriginal musical traditions.

A low rumble marks the beginning – with Nwanoku’s double-bass sounding remarkably like a didge drone. Then Barton’s beautiful tenor voice rings out a lullaby theme. Runs up and down the strings give way to a melody first on the viola, then French horn and piano. The tentative pulsing sounds grows – a panoply of sounds emerge.

Barton says that in writing the piece, he visualised of the coming together of all nations – with each instrument interpreting a part of the player’s landscape, “their own history and bloodlines of their mother country”. For the listener, it certainly has this sense: not quite a tension between more traditional chamber sounds and the didge and rattle of Barton’s percussion sounds of an older tradition, but more a swelling interplay of ideas. It’s beautiful, sometimes unsettling, if your ear is looking for resolution.

After this swirling interplay, Barton returns to the sung lullaby. The audience stands.

Since its origins, Chineke! has been a champion of composer Samuel Coleridge-Taylor (1875-1912), born in England to an African father and white mother. His Nonet in F Minor was written when he was teenager and, despite being the oldest piece in this concert, is a revelation. While it is the most traditional in form of this program, it sounds so modern, so fresh – lovely melodies. You can hear why he has been compared to Mahler or, sometimes, Dvořák.

Chineke! brings an approach to chamber music that is refreshing and joyful – I’ve never heard quite so much delighted laughter at a concert such as this before.

I hope we’ll see them again and that the spirit of this project can lead to measures to encourage a similar bloom of diversity in classical music audiences as well as the players.