“The first duty of life is to assume a pose,” Oscar Wilde declared, “what the second duty is no one yet has found out.”

As his biographer Richard Ellmann noted: “Wilde had been much concerned with images. He had painted self-portrait after self-portrait.” Ellmann was referring to Wilde’s variety of beards, his curled hair and foppish costumes – all of his visual ripostes to the punitive drabness and prudery of Victorian England.

Then, as now, to be outlandish is a statement, an assertion – even a declaration of war to one’s enemies  – and Oscar Wilde’s novella The Picture of Dorian Gray, published in 1890, proposed such a challenge. It was also a critique of the aestheticist ideas that he enthusiastically upheld, and a queer message through the flames that would haunt him later at his trial.

In Wilde’s story – moral fable, satire, and Gothic horror yarn, all in one – Dorian Gray, the beautiful young man painted by Basil Hallward and lured into a life of hedonistic excess by Lord Henry Wotton, makes a pact to exchange his soul for perpetual youth and beauty. In a reversal of the usual state of things, his portrait will age and perish but he will never. It doesn’t end well, but Wilde, as moralist, wants to have a few words each way. Summing up his novella, he said: “All excess, as well as all renunciation, brings its own punishment.”

In Kip Williams’ thrillingly imaginative and visually gorgeous adaptation for Sydney Theatre Company, Wilde’s spellbinding narrative is both conscientiously maintained and given a currency and shrewd commentary which transforms and renews the original.

When Wilde was working on the story, he admitted in a letter that he was having trouble. “I am afraid it is rather like my own life – all conversation and no action. I can’t describe action: my people sit in chairs and chatter.”

In this production (one of four monologues in this year’s Festival performed by women), the brilliant Eryn Jean Norvill presents, with a marvellous range of video and live feed inclusions, 26 characters – many of whom sit in chairs and chatter with each other in real time.

From her first appearance on the huge vertical screen, Norvill captures us. Surrounded by a black-shrouded army of videographers, dressers and others (I counted 13 at the final curtain), she changes costume, position, screen size and character for two captivating hours. Williams has created an extraordinary display of stage logistics but it is all, and only, to serve the live performer.

Norvill commands the stage as the narrator, as the photogenic Dorian Gray, the painter Hallward with sideburns and the moustachioed Lord Harry. Her delivery is splendid; Williams’ text wisely highlights the cadences and pleasures of Wilde’s elegantly easy prose. Rarely do characterisations step into stereotype except for comedy – in the puppet show of Sybil Vane’s rendering of Juliet, for instance, and in the astonishing illusion of a dinner party scene where Norvill, as Lord Harry, sits beside a long table with four different video images of herself satirising every variety of upper-class twittery. 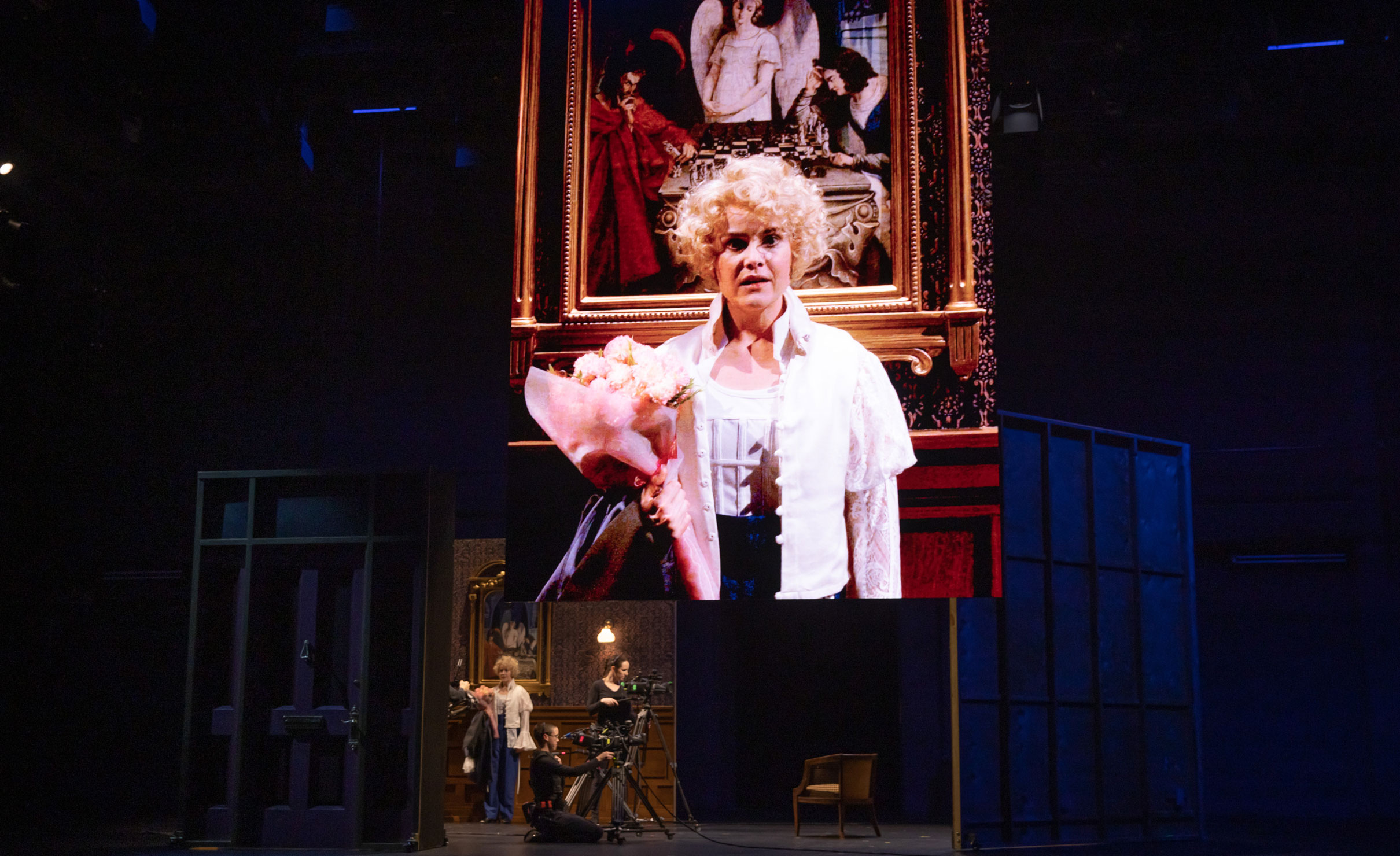 There is much to admire about this production which, having lost time to the COVID closures, is surely still destined for further international festival performances. Designer Marg Horwell has created a sumptuous floral décor around Dorian, enhanced in the vibrant technicolour of David Bergman’s video, delectably lit by Nick Schlieper, and enveloped by composer and sound artist Clemence Williams’ evocative, at times quirky, score.

As Dorian Gray descends further into the lower depths, it is not art for art’s sake, but glamour for celebrity’s sake. His puckish blond locks become a pompadour of impudence, Horwell’s costumes shift from page-boy whites to lurid Liberace-stylings, or maybe hip-hop imperial, with gaudy sequinned cloaks to match his dagger.

When he admires his lavish excess on his iPhone as if in a mirror,  Photoshop helps us visualise the distortions of the portrait hidden behind the curtain in his apartment. It is a witty premise. While Wilde’s character exchanges his soul to preserve himself as a work of art, Williams’ reading is more damningly banal. His Dorian is seeking immortality on TikTok and Instagram.

The Picture of Dorian Gray is a depiction for our times while reminding us of the brilliance of its author. Kip Williams and Eryn Jean Norvill have created memorable art by holding up a video mirror to show just how far our vulgar narcissism has trashed it.

The Picture of Dorian Gray is playing at Her Majesty’s until March 20.