“You might be wondering why I’m telling you this story,” Emma Beech says mid-way through The Photo Box. I say Emma, but it’s actually her dad, Jim, talking, as she re-enacts the speech he gave at her backyard wedding a few years ago. She’s been criss-crossing between characters and time periods so much that you could be forgiven for wondering just which story she means.

Beech herself is a storyteller, and a consummate one at that. Tonight, she’s dressed in an impeccably cool tailored orange suit — this is what you get when you do a festival show, she explains – and is utterly at home on the stage. Then again, it’s a stage made to look like home; designer Meg Wilson’s gently retro set features a rounded platform that alternately stands in for the lake of Beech’s Riverland hometown of Barmera, or a living room carpet. Behind her, rounded squares and ovals crowd the rear of the stage like picture frames on a cluttered mantelpiece.

Beech is the youngest of a big country Catholic family of eight kids, she tells us, and was definitely an accident.

She points out a photo of her mother, at 41 years old, holding her infant self. It’s the first of many; a few years ago her parents decided to divvy up the family photos into eight boxes, and The Photo Box is a dreamlike approximation of Beech flicking through her share. As she guides us on a journey through her family’s past, these faded photos are projected behind her with all their mullets, homemade bridesmaid dresses, and first communions.

The initial disarming informality of Beech’s stage manner belies the precision of her craft; the show sits somewhere between a seemingly off-the-cuff, stream-of-consciousness memory dump, and the kind of lived-in anecdotes and character studies that have been honed by years of retelling and family myth-making. It seems, at first, that Beech knows these people inside out.

She flicks back and forth through the decades, the marriages and divorces, the man caves and health scares, in affectionate but unvarnished terms. She conjures up vivid vignettes and invites us inside; there’s the manic, sweaty Beech family Christmas in a 41-degree Barmera summer, and the mystified Danish boyfriend she’s dragged into this whirlwind of burnt meat and day drinking. Or the surreal, heightened emotions of the weeks she spent in the neonatal ward after giving birth to kids of her own – triplets, no less. 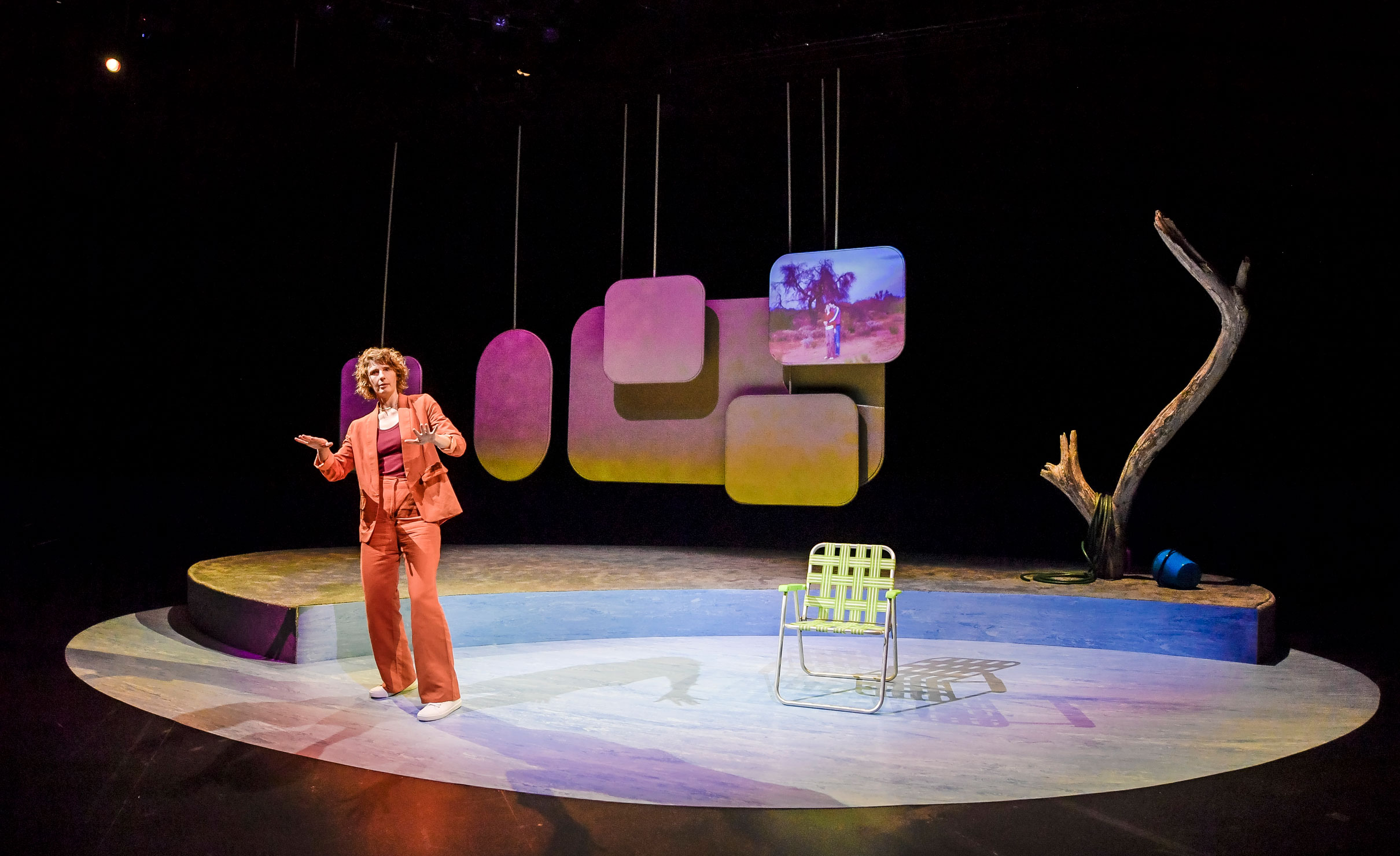 The rounded platform on The Photo Box set alternately stands in for Lake Bonney or a living room carpet. Photo: Roy Vandervegt

Beech’s warmth and humour make us putty in her hands, but that also means when the moments of heartbreak and unexpected pangs of feeling arrive, the impact can be unexpectedly devastating.

Throughout the play, fake fish tumble from the rafters in a callback to a mysterious fish die-off that once plagued Barmera’s Lake Bonney. As the fish flap and die on the stage, they hint at an intangible sense of unease that’s always lurking outside Barmera’s postcard-ready image, a rot sitting just out of frame of all those childhood memories. Like all holiday towns, the experience is a little different when you don’t pack up and leave at the end of the season.

The Photo Box grew out of a piece of “performance art”, Beech says self-deprecatingly, where a few years ago she opened the box for the first time in front of an art gallery audience. It was, she admits, pretty average, but there was a show there.

This fully-realised Adelaide Festival production, directed by Mish Grigor and co-produced by Vitalstatistix and Brink Productions, still feels intimate and personal. But there’s also a note of universality – throughout the performance, a woman in the row behind me issues a groaned “Oh gawd” of recognition too many times to count.

“It’s so true,” Beech chuckles offhandedly to herself at one point after performing a funny, if unflattering, impression of one of her older brothers. We have to take her word for it, of course, and when she invites her older sister on stage midway through, it becomes clear that no one sibling has access to the whole family story. Like their photo boxes, they each hold different pieces, many that overlap, some that don’t.

Late in the piece, we are shown almost-wordless filmed portraits of her brother, mother and father quietly going about their passions. We’ve heard so much about them that it feels like we already know them. But as the camera lingers, and Beech watches with us, it seems like even she’ll only ever know part of the picture herself.

The Photo Box is being performed at the Space Theatre, Adelaide Festival Centre, until March 7.