Co-commissioned by Adelaide Festival and the Edinburgh International Festival, Macro is the result of a multi-pronged collaboration led by local company Gravity & Other Myths with the Djuki Mala First Nations dance group, and also featuring Adelaide youth vocal ensemble Aurora and a trio of stellar contemporary folk musicians from Scotland.

It’s an ambitious idea, bringing together such an eclectic collection of artists for a single 75-minute show, but the 7500 or so festival-goers of all ages who converged on Adelaide Oval’s Village Green last night were clearly primed to witness something special.

After an introduction by Adelaide Festival joint artistic director Neil Armfield, followed by a minute’s silence for former cricketer Shane Warne, Kaurna custodian Karl Winda Telfer and young performers from Yellaka gave a moving presentation emphasising the spirit of place and the cultural significance of this place, in particular. One by one, the Macro performers walked across the stage to be cleansed by the spirit fire, with individual acrobats offering a taste of the physical feats to come as they moved down the aisles. 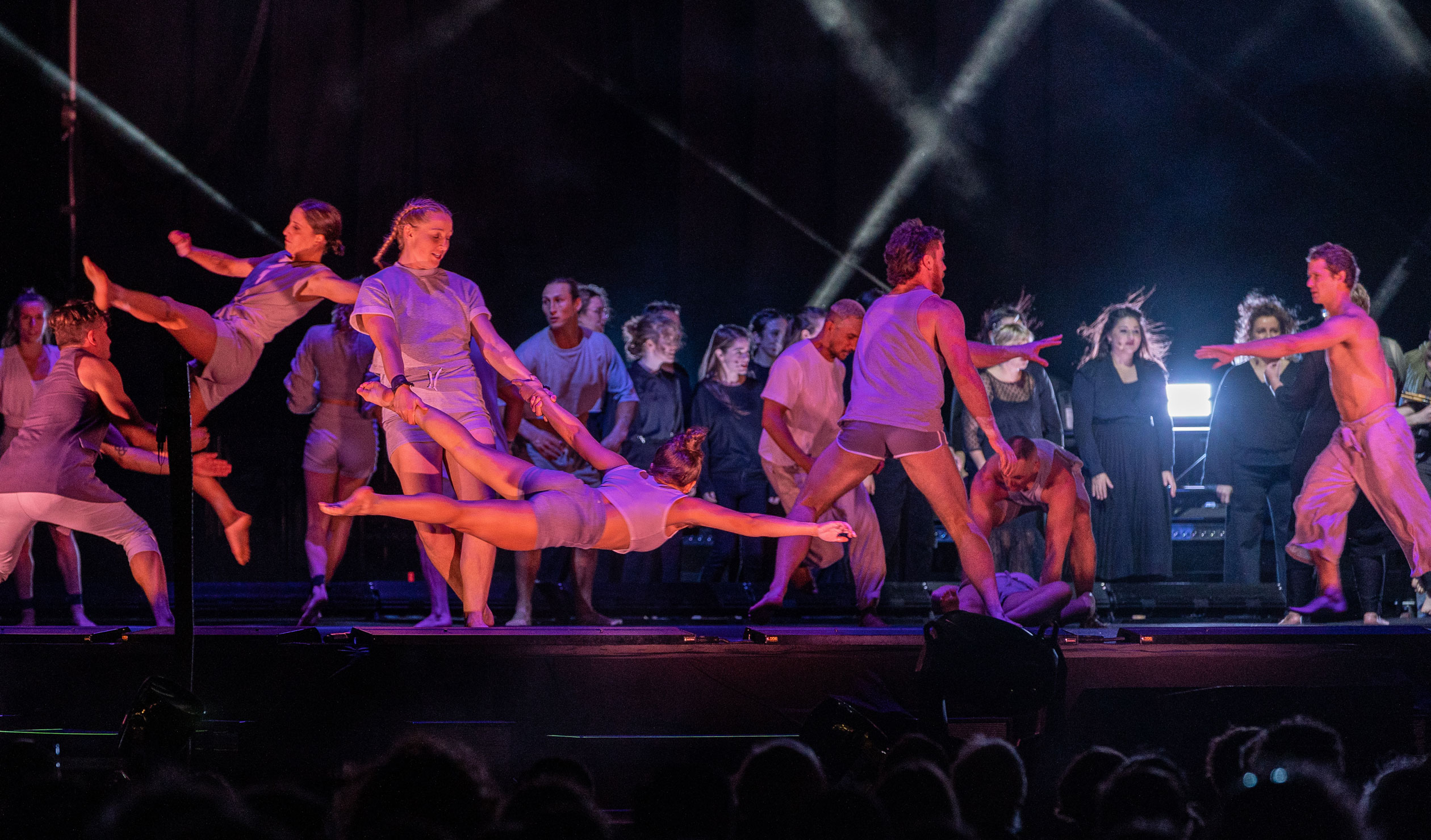 The acrobats perform among singers from the Aurora choir. Photo: Andrew Beveridge

When the 30-strong Gravity & Other Myths troupe did start performing on stage, minimal lighting meant the audience had to focus intently to make out their movements, but soon their perfectly synchronised – and often gasp-inducing – routines were beautifully spotlit against the backdrop of rising and falling voices of the choral singers moving among them.

The acrobatics throughout the show were impressive: moving with seemingly effortless fluidity, the performers formed multiple towers up to four people high before collapsing them with equal grace; they swung and spun through the air, hurling each other through space and executing handstands on top of their human towers. It’s like witnessing an aerial ballet, with two screens either side of the stage highlighting the action.

The five dancers from Djuki Mala are equally acrobatic and integrated well with the GOM troupe in the routines, although their distinctive dance style could have been further highlighted. 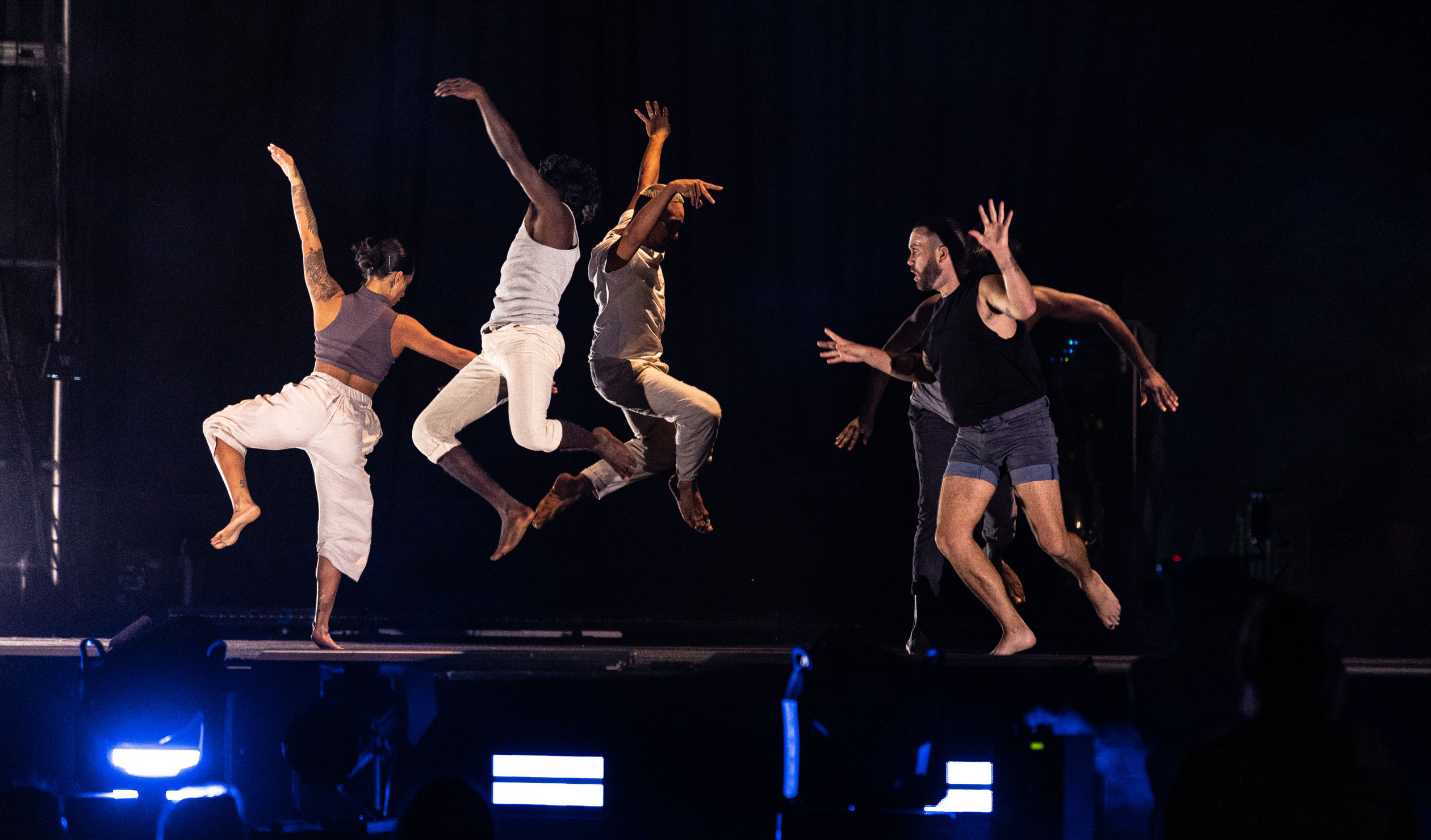 Scottish musicians Aiden O’Rourke (fiddle player and co-composer of the score with Ekrem Phoenix), Kathleen MacInnes (vocals) and Brighde Chaimbeul (pipes) were the other key element in this cultural cocktail. They constantly moved among the acrobats and dancers, adding a unique dimension to the performance. MacInnes and Phoenix also took centre-stage for a spine-tingling duet in which she sang in Gaelic and he in Turkic.

There are clear echoes of GOM’s award-winning 2021 Adelaide Festival show The Pulse in Macro, although overall this work is not as tight or polished, possibly due to all the moving parts. Certain elements work better than others – the segment where performers are talking among themselves as if in a rehearsal, for example, had a clearer purpose in The Pulse – and more uplifting moments to balance the lament might have been welcomed by audience members at a family-friendly show, but Macro really hit its straps in the dynamic final segment.

The coming together of people and cultures is something to relish in these current times and provided an opening night to remember. It was an especially rare – and special – treat to hear bagpipes, fiddle and yidaki played together. 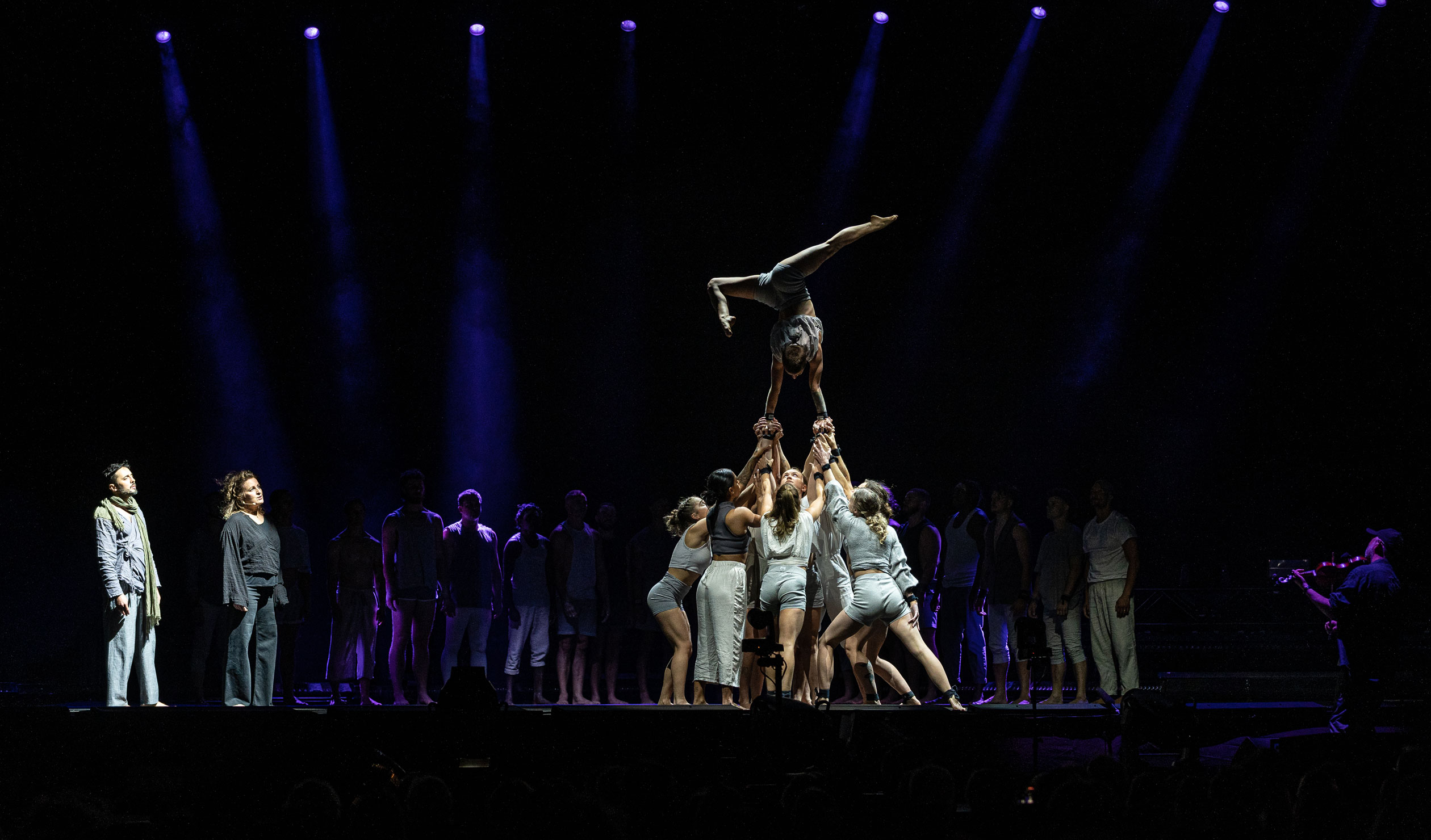 Macro was performed for one night only at Adelaide Oval’s Village Green. It will also open the 2022 Edinburgh International Festival in August.