I have seen The Golden Cockerel once before – when I was seven. My father took me to a dress rehearsal at Covent Garden and my main memory is of the Astrologer and his Cockerel plus the reds, blues, and golds of Imperial Russia. Since then I have always thought of the piece as feeble. Nothing could be further from the truth. This is a truly wonderful evening at the theatre.

Despite its outward clothing as a pretty fairy tale, Rimsky-Korsakov and his librettist Bielski created a satirical morality fable aimed at the Tsar (Rimsky – “I want to disgrace Tsar Dodon completely”). Rimsky-Korsakov had thought The Legend of The Invisible City of Kitezh would be his final opera. However, the political situation in Russia at the beginning of the 20th century inspired him to take up his pen again to compose a satire of the autocracy, Russian imperialism, and the Russo-Japanese war. Needless to say, the censors prevented the performance of the opera at first, and Rimsky did not live to hear it.

The opera is the story of a foolish old man, Tsar Dodon, his even more foolish two sons, and a woman, the queen of a neighbouring country, who is at war with him but outwits him by seducing and marrying him – therefore inheriting his kingdom, his two sons having, remarkably, killed each other in the battle in which they were supposed to defeat her. All this is overseen by a presiding wizard – the ethereal Astrologer and his golden, crowing, Cockerel. Rimsky magnificently creates different sound worlds for the different worlds inhabited by his characters: the rather bluff conversational music of Tsar Dodon and his entourage, the seductive eastern-flavoured music of Queen Chemakha, and the other-worldly, spooky and magical, world of the Astrologer. 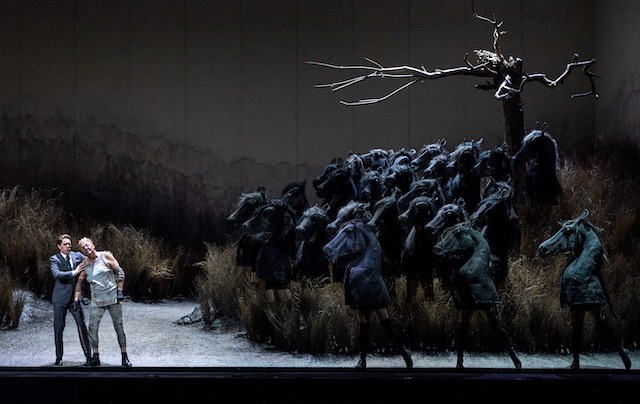 The Tsar, his son and horse-headed army. Photo: Andrew Beveridge

I have seen three Barrie Kosky productions. He is an oasis in the arid desert of Regie-Theater, as was Patrice Chereau before him. He presents us with wildly imaginative productions, the roots of every idea firmly within the ethos of the piece, to which he then adds sparks of illuminating humour such as his brilliant solution here to the problem of allowing time for the scene changes between the acts.

The curtain goes up on Rufus Didwiszus’ evocative set, beautifully lit by Franck Evin – an unending field of flax, dominated by a tree on which the on-stage Cockerel of Matthew Whittet will perch. There are some beautiful costumes from designer Victoria Behr, not least a chorus of horses whose nether regions are the stockings and suspenders of the Tiller Girls. A costume-changing set of dancers provide contributions that always add to and illuminate the plot.

Tsar Dodon appears, looking rather threadbare – a metaphor for his life and rule? The part is taken by Pavlo Hunka, who sings powerfully and seamlessly, and I am sure that Rimsky would feel he succeeds in “disgracing Tsar Dodon completely”.  The gorgeous Queen of Chemakha – Venera Gimadieva – appears in diaphanous tinselly dress, and in the long second act seduction of Dodon she, Arvo Volmer and the Adelaide Symphony Orchestra realise every ounce of sexiness that the music provides.

Orchestra and conductor are superb throughout the evening – impeccable ensemble and balance, silky phrasing, and beautifully judged dynamics. Anthony Hunt’s chorus are astonishing: the ensemble’s sound is true and perfectly blended. The Astrologer is a remarkable part, written for a tenor altino. It is very high, but it held no terrors for Andrei Popov who delivered a suitably wizard-like performance. 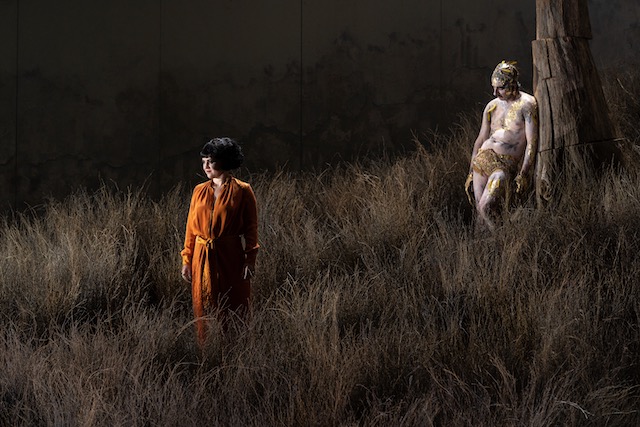 The Golden Cockerel (Matthew Whittet) with the Queen (Venera Gimadieva) in the stage’s never-ending field of flax. Photo: Andrew Beveridge

As Tsar Dodon’s not-very-useful General Polkan, Mischa Shulmans also gave a strong performance from within his horse’s head. The rest of the cast were excellent too – Nicholas Jones and Samuel Dundas as the Tsar’s two sons, the alto Alexandra Durseneva as Amelfa the Housekeeper (a role and a voice type without which a Russian opera would not be complete), and Samantha Clarke – whom I last heard a few years ago singing a superb Donna Elvira for British Youth Opera – as the off-stage voice of the Cockerel.

There are well over a dozen excellent operas by Rimsky-Korsakov and other great Russian composers, such as Borodin, Mussorgsky, and of course, Tchaikovsky whose Eugene Onegin is a masterwork that appears inexplicably rarely. Instead, we find The Pearl Fishers popping up again and again… sigh. Dare we hope that future Adelaide Festivals will explore this cornucopia of glorious works?

In the epilogue, the Astrologer appears and delivers a version of Puck’s speech: “If we shadows have offended, Think but this and all is mended.” In this parable of worldly ambition and foolishness, the Astrologer proclaims: “Two were mortal – the Queen and I”.  Wouldn’t it be nice if our dreams were in fact our mortal selves?

The Golden Cockerel is playing at the Adelaide Festival Theatre until Wednesday, March 9.