Only metres from the River Torrens, the site of the murder of Adelaide University law lecturer Dr George Duncan on May 10, 1972, the stage of the Dunstan Playhouse is simply set.

A white stage floats behind a moat, filled with water. Arrayed on either side are members of the Adelaide Chamber Singers, dressed in monochromatic costumes of the era.

A rear projection screen aids the storytelling with ominous and, sometimes, beautiful images of the river, news clippings, and the key players in this tragedy.

In the pit, the meticulous Christie Anderson directs a small orchestra filled with well-credentialed players. Her approach, as so often with her, is a masterful combination of sensitivity and precision.

Suspended from a steel cable above the stage, dancer Mason Kelly is dressed in a suit, his white shirt unbuttoned, his body contorted like a crucifixion figure.

The co-commissioned piece by Feast Festival, Adelaide Festival and State Opera South Australia, exemplifies what a local arts festival should be: telling our stories with all the tools available to artists.

The show is billed as an oratorio – a form with religious connotations. It’s a deliberate choice, like everything in this intricately produced work.

With a score by Joe Twist and libretto by Alana Valentine and Christos Tsiolkas, the show combines timeless music – hymn-like pieces, Broadway tinges and ’70s pop inflections – with words that are both unflinching and poetic.

It begins with an acknowledgment that Duncan’s death was only one of many crimes against gay men – faces and dates flash past.

Tenor Ainsley Melham, playing the “Lost Boy”, is a constant presence – a Shakespearean-style narrator moving from commentating on the action, to participating in it. Pelham Andrews, with his sonorous bass, plays a selection of cops, while Mark Oates, another tenor, is brilliant as Duncan and Don Dunstan. 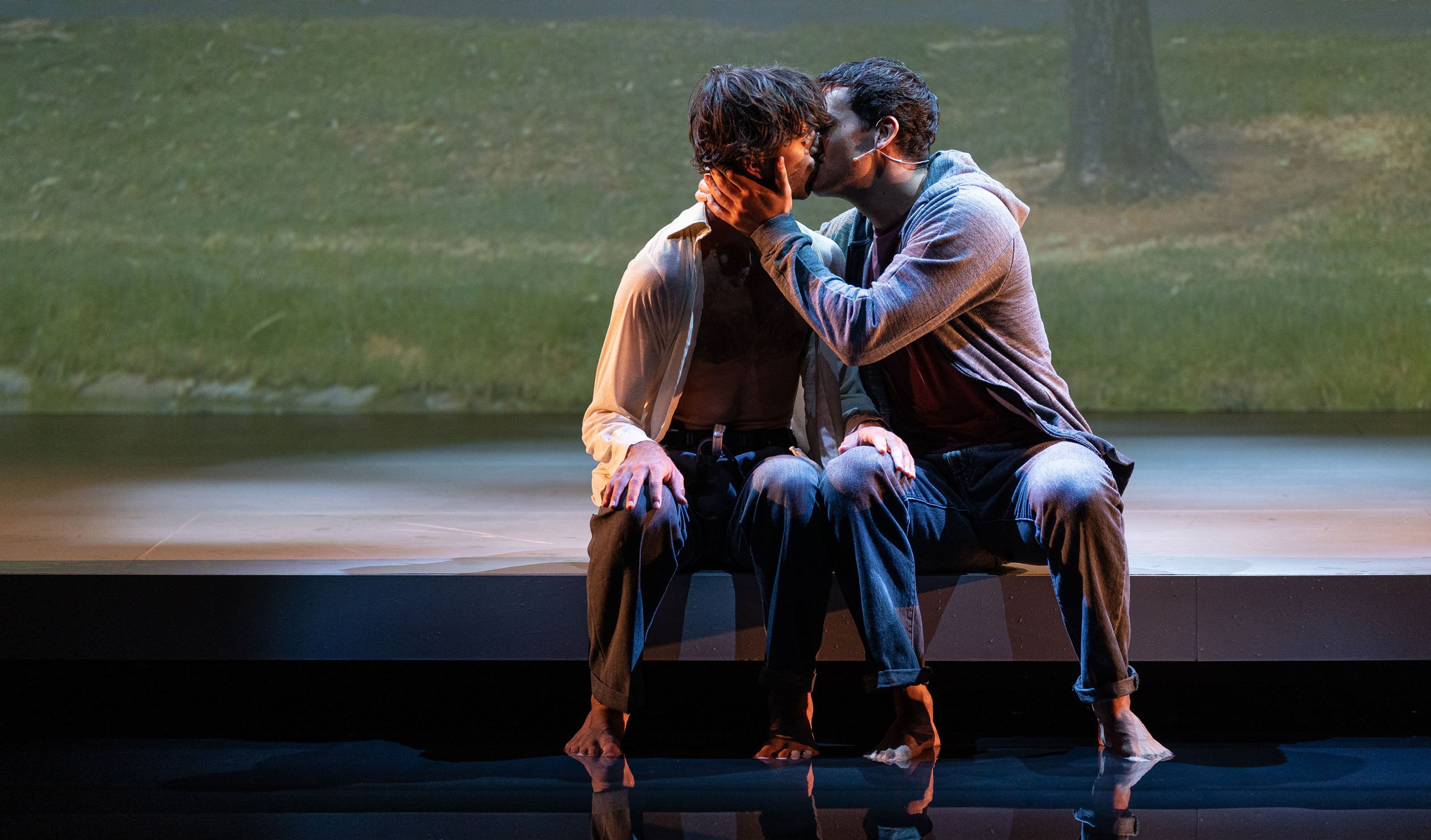 From the brutality of the drowning (“We thought faggots floated…”), the action moves to perhaps the most moving song ever written about Adelaide – “River of No Return” – sung by Oates in the guise of Duncan, accompanied by the Chamber Singers, whose tone and accuracy is sublime throughout.

This soaring, heartrending piece both humanises Duncan, so often just seen through that diffident and iconic newspaper image, and reclaims the Torrens, using its lyrical Kaurna names: Karrawirraparri and Tarndapirri.

The Torrens has a valley called Hope, they sing; the Torrens has a mountain called Pleasant. The river of no return. This moment is the heart of it: we hear Duncan’s voice; he recognises the moment that he is drowning, dying.

From here the story moves through the cursory inquest, then Dunstan appears along with others, such as Labor MP Peter Duncan and Liberal Country League member Murray Hill, who made the first, failed attempt to decriminalise homosexuality.

There’s dancing and joyful singing as the law eventually passes, three years after Duncan’s death. The action transitions to its last act – the 1980s trial of two police vice-squad members. In a powerful sequence, Melham – as a key witness now – is cross-examined about what he saw on that night. The officers were acquitted.

The stunning final scenes are contemporary – images of the city today flicker on the screen along with faces of people affected by the story; we see George Duncan’s mother and father. This is about a real person; real people. The ensemble sings of the “lives and the laws you changed”, addressing Duncan directly. 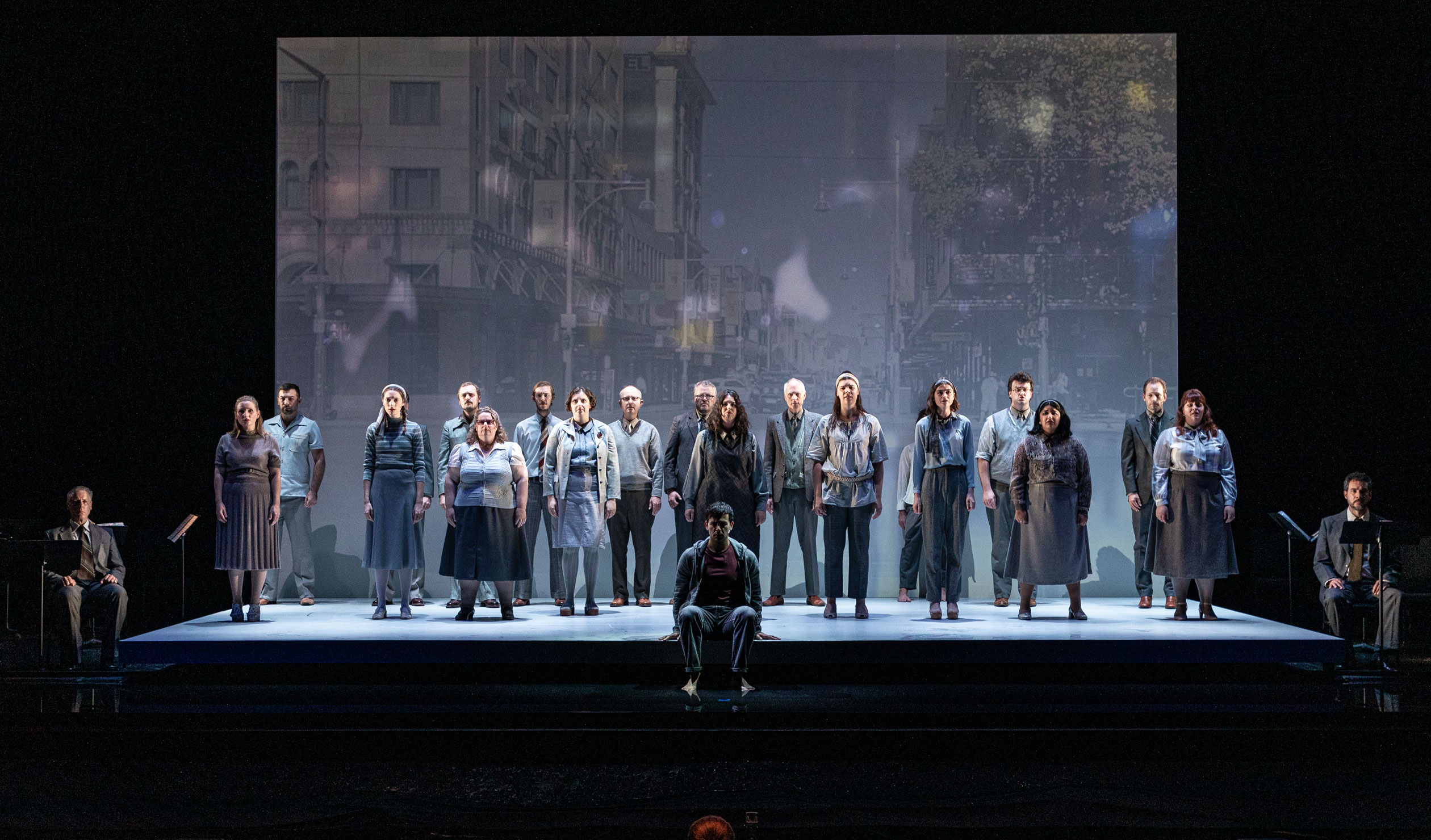 Images of Adelaide are projected behind the Watershed cast. Photo: Andrew Beveridge

Neil Armfield’s direction is restrained but well-weighted to the very clever libretto.

So many times, this emotional piece feels like it is approaching catharsis for the audience, but pulls back, as it must given the unresolved nature of the crime, given the ongoing violence.

The beautiful final piece returns us to the river; as the singers proclaim that “love is all there is”, Mason Kelly’s body – once more suspended in space – does not descend, but rises with the music.

We can’t, then offer justice, only love, to George Duncan; only recognition of what good was finally done in the wake of this crime.

It deserves to be seen well beyond this festival: it deserves to become a touchstone piece of art about who we are in South Australia – the tragedy and, sometimes, triumph of our beautiful, infuriating city.

Watershed – The Death of Dr Duncan is playing at the Dunstan Playhouse until Tuesday, March 8. Read InReview’s interview with writers Christos Tsiolkas and Alana Valentine here.