Gravity & Other Myths’ 2021 Adelaide Festival show The Pulse was an epic undertaking: an award-winning show that brought together 30 acrobats and 30 singers in a beautifully synchronised display on the stage of Her Majesty’s Theatre.

Picture a 30-strong acrobatic troupe, five performers from the Djuki Mala First Nations dance company, a mass choir of 24 singers, three Scottish contemporary folk musicians and a Turkish-Bulgarian singer (composer Ekrem Phoenix) all performing together on a huge stage on Adelaide Oval’s Village Green before a crowd of around 7500 people.

“It’s the next level again,” Grant says, describing the scale of Macro compared with The Pulse.

“We’ve got multiple four-people-high towers on stage simultaneously and I think it’s made even more potent by the fact that we’re collaborating with First Nations artists at that high level.”

Gravity & Other Myths (GOM) is co-producing Macro with Djuki Mala, which first came to prominence in 2007 as the Chooky Dancers with their viral video clip of the group dancing to “Zorba the Greek”. Grant, who began his career in Indigenous community circus, explains that there are long-standing friendships and connections between the two companies’ creatives, so collaborating for the Festival show was a logical move.

While Djuki Mala originated on Elcho Island in the Northern Territory, the troupe performing in Macro includes First Nations artists from other parts of Australia.

“Because all of these First Nations performers are so physical and two of them work regularly in circus and acrobatics, we’ve actually been able to pretty much learn each other’s content,” says Grant, explaining how GOM and Djuki Mala come together in Macro.

“Some of the music and action is related to some of The Pulse, in relation to the style of crowd movement, and then we’ve just tried to find interesting ways at either a soundtracking level, a choreographic level or a design level to really twist that into a new and amazing thing.” 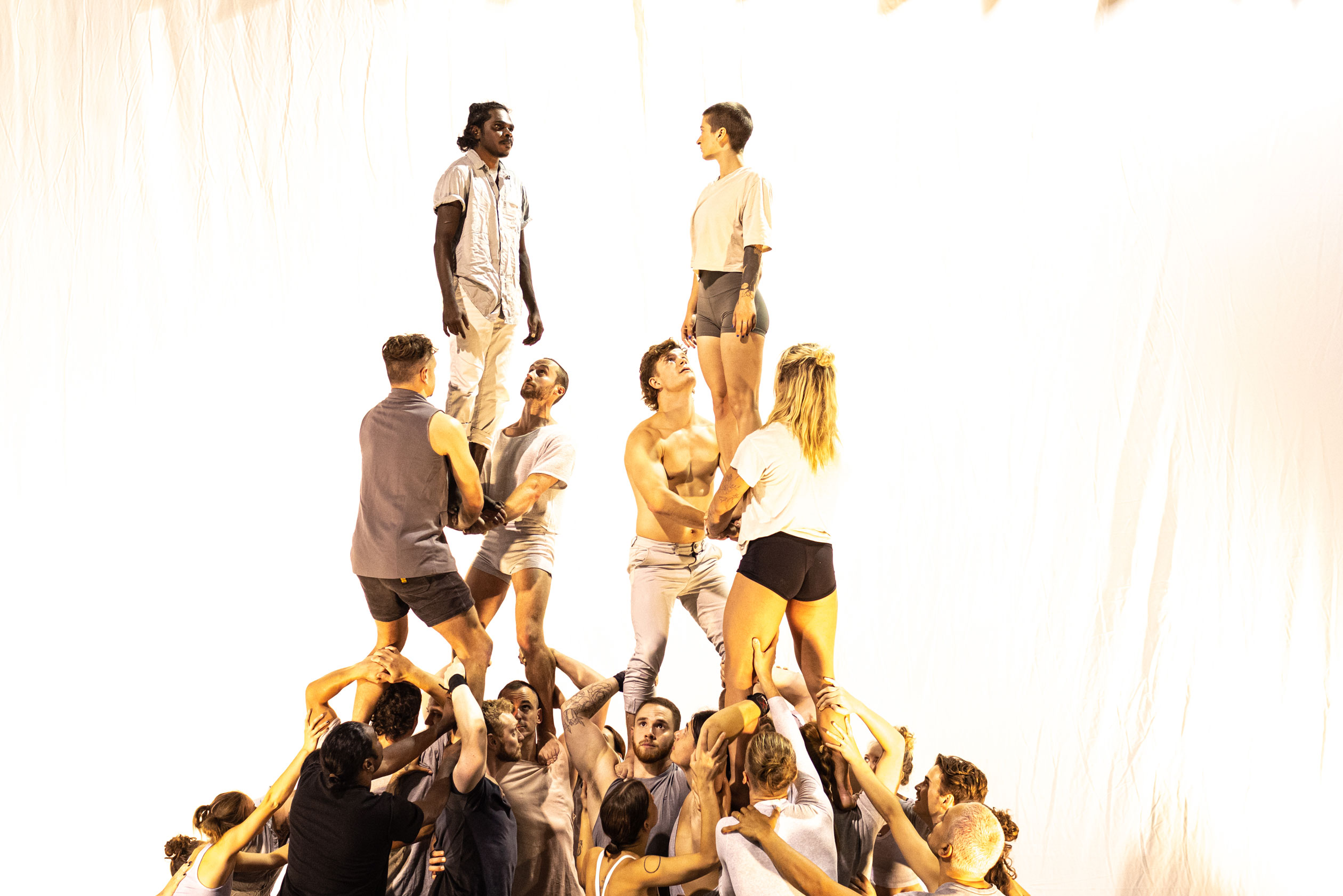 The production has been designed by Geoff Cobham, with the action taking place on a diamond stage vaulted on a larger 20m-wide x 5m-deep stage. Live video will be projected onto a series of giant screens, with Grant saying this will highlight the scale and danger of the routines for the Adelaide audience – which will include Fergus Linehan, director of the Edinburgh International Festival, which co-commissioned Macro.

“Having to make something fit in a space for as many people as we are, a lot of thought has gone into this amplification of everything, so how do we make it really fill that space and, to quote Fergus from the Edinburgh Festival, not feel like a band stage in a paddock.”

The score, co-composed by Ekrem Phoenix and UK-based Aidan O’Rourke, is a fusion of influences including Australian First Nations instrumentation, language and lyrics, and Scottish music and singing. In addition to the singers from Aurora (Young Adelaide Voices), three specialists in Scottish and Gaelic music ­– O’Rourke (fiddle), Kathleen MacInnes (vocals) and Brighde Chaimbeul (pipes) – have travelled from Scotland to Adelaide for Macro.

“There’s a scene in this piece call Lamento, which is based on an old classical lament by Monteverdi but brings all of the different traditions of lament together ­– so Gaelic lament, First Nations Australian lament and this classical lament – to explore the things that we miss and yearn for, whether it’s the past or people or country or place,” Grant says.

“It’s absolutely spine-tingling. This kind of exploration and connection about things that we can all really identify with is pretty amazing.”

This idea of connection reflects what Grant says is the broad theme of Macro, which was identified early on in the production process through discussion with one of its key collaborators, the Kaurna cultural group Yellaka, co-founded by Karl Telfer.

“Ultimately it’s about the spirit of place,” Grant says.

“And that, for me, is a really good reason for us to be doing the opening of an arts festival in Adelaide, because it’s about the people who are embodying the spirit of place together during a time of festivity… the piece is about being together and sharing an amazing experience together.”

The allocation of tickets for Macro has been exhausted, but Country Arts SA will be streaming the show to venues in regional South Australia (details and bookings here). Other Adelaide Festival opening weekend shows include centrepiece opera The Golden Cockerel, dance double bill The Rite of Spring / common ground[s], UK dance-theatre work Juliet & Romeo, and oratorio Watershed: The Death of Dr Duncan. The contemporary live music program at The Summerhouse also opens tomorrow, with Adelaide Writers’ Week beginning at the Pioneer Women’s Memorial Garden on Saturday. See the full Adelaide Festival program here.