UK theatre company Donmar Warehouse’s Blindness is very much a show of and for the times.

Based on Nobel Prize-winning author José Saramago’s dystopian novel Blindness, it was conceived during COVID-19 as a socially distanced sound and light “installation” using cutting-edge binaural sound design and was the first post-lockdown theatre production presented in London. The narrative, involving a sudden contagion of blindness that sees those afflicted quarantined in wards in a disused asylum, also has contemporary resonance.

Adelaide Festival audiences will experience Blindness through headphones in a darkened Queen’s Theatre. The entire tale – adapted by playwright Simon Stephens – is told by a single “storyteller” (also known as “the doctor’s wife”) voiced by Juliet Stevenson, who captivated local audiences with her performance in the 2020 Adelaide Festival play The Doctor.

Here, director Walter Meierjohann gives an insight into the inspiration and creative process behind Blindness, and what Festival audiences can expect from the experience.

When did you first read José Saramago’s dystopian novel and what impact did it have on you?

I was assisting the prominent German director Klaus Michael Grueber, who was very influential in my career, on Aida in Amsterdam in 1999. His vision of theatre was very sensual. In all his performances there was something dark, really dark, but lively at the same time.

I was 27 when I read the novel. It blew me away in its daring and haunting premise: What would happen if a whole society went blind.  I was so in love with this director’s work that I gave him the novel as a premiere gift because I felt like if someone could do this, it would be him. However, he never got back to me. I got older and realised I should be doing this myself.

What was your original vision for the production?

It was the opposite of what we’re doing right now at the Donmar. I envisioned it as a mainstage production with a hundred people on stage. I saw the Greek drama in it, and I think Greek drama is defined by the speaking to the polis – you speak to your own community with an epic story which reflects the time you live in.

In my early thirties, I was the head of a new writing company within the State Theatre of Dresden. I was granted the rights to stage it, but the artistic director of the theatre said it was too bleak. The reason I wanted to do it in Dresden was because in 2004 you could already sense the right wing rising. So the blindness, to me, was the rise in right-wing fascism in Germany.

Then I moved to London and in 2008 saw the collapse of the financial system. The new blindness, to me, was the crisis of capitalism. Fast forward to 2016, and we had the Brexit vote. I had been appointed artistic director of HOME [arts centre] in Manchester three years earlier and I felt like we were entering dark times once again.

Everything I admired in Britain – the tolerance – suddenly turned on its head. I felt a mood change. The mood change is like an epidemic. An epidemic of nationalism that spreads like a virus. That’s what Britain felt like to me in 2016. A year after I opened the building, I commissioned Simon Stephens to write an adaptation of Blindness.

How has the narrative been adapted for your sound-based production?

I have always admired Simon’s sparse writing, and his work is very dark. When we spoke about Blindness, he said he’d never heard of it. Then when he read it, he said there were three novels that changed his life and this was one of them.

Simon didn’t re-write so much; what he did was structure it into three parts and reduce it. That was his major achievement – he turned it into a play with 11 characters and a chorus of 100 extra blind people. And the rewrites he did were stunning. Then after working on the first draft in a workshop at the National Theatre Studio, he said to me: ‘Instead of 100, can you imagine one?’

I couldn’t see that. But I thought: give it a go, Simon. We didn’t have a theatre attached so there was no project, in a way. There was just the workshop. And Simon went ahead with it. We got the draft much later, in November 2019.

In what ways does the binaural technology and immersive sound design of Blindness enhance the listener’s experience of the story?

Blindness has a three-part structure, which is also reflected in how we use the set and lighting design. But the centrepiece is the binaural part in the middle. The technology allows us to feel that we are in the same space with Juliet [Stevenson] and we become the protagonists of the story. Through its 360-degree immersion, you really feel that Juliet is talking to you directly.

As the narrator, Juliet Stevenson is the only person who can still see in the epidemic and therefore carries the weight of the story. What was it like working with her?

We worked with one of the most astonishing actors, who has the most extraordinary knowledge of recording, and with the fantastic Ringham brothers [sound designers Ben and Max Ringham], who have shaped Simon’s adaptation into a piece of audio magic. That made it much easier for me.

When Juliet did the take where she shouts at the men in the ward, she went into a rage. It was one of the most astonishing takes, but it damaged her voice. But in a way it tells the story of how she suffered in that asylum. As we carried on recording we were worried her voice before sounded too clean. I learnt to give her one or two minutes before doing a take because she really needed to see a scene in order to express the psychology of it. That’s why we love actors.

And one of the big things was that she didn’t have a partner. She had mainly the dummy head microphone to interact with. There were other characters in the space and she had to imagine them. I remember one take with Jessica Hung Han Yun, our lighting designer, standing in for the woman with the dark glasses – you can hear the difference when Juliet talks to someone in the space. Even with an artist of her calibre, it’s astonishing what a human presence does to an actor’s directness. 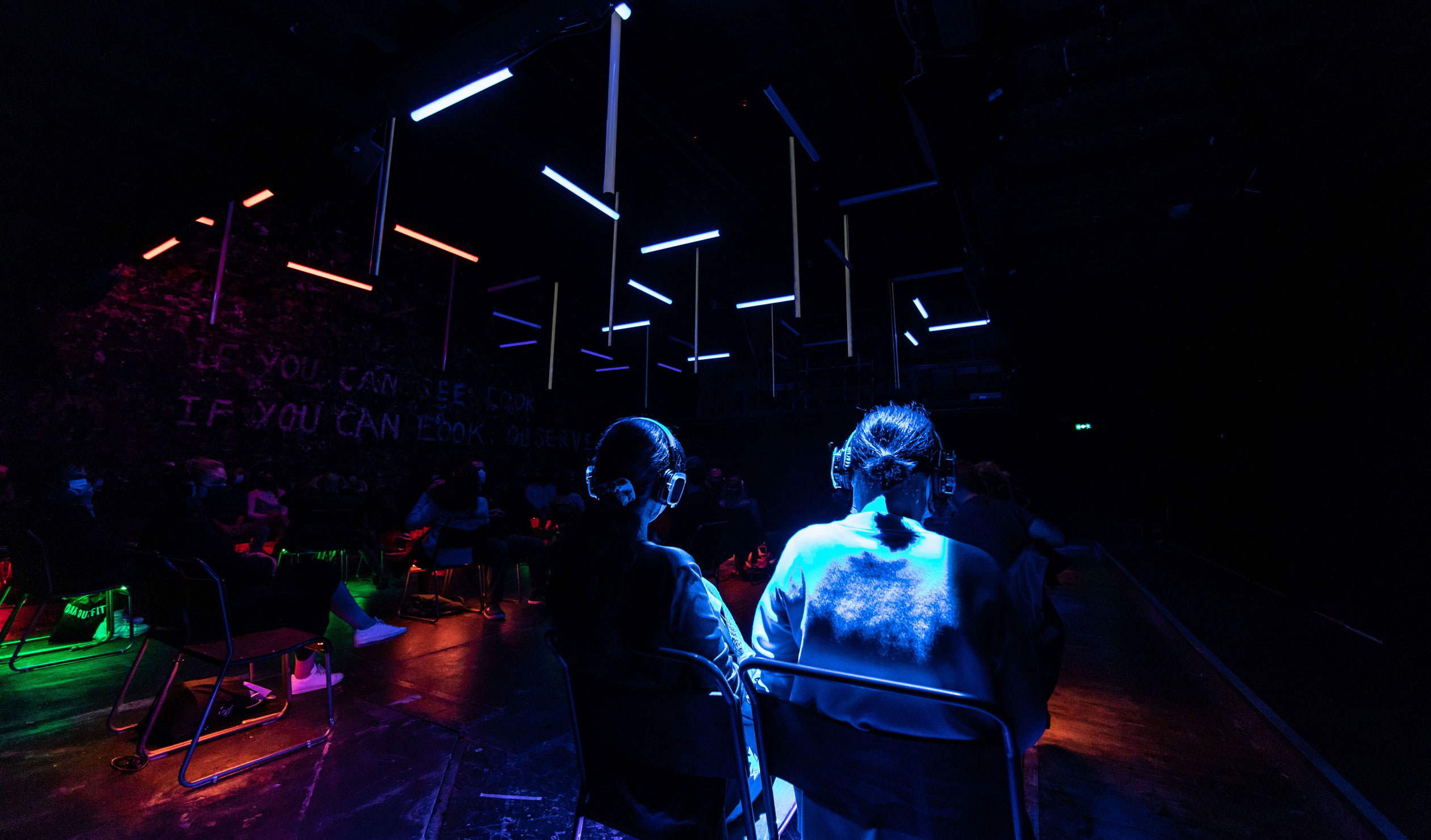 Blindness premiered in the UK in the midst of the COVID-19 pandemic – how do its themes resonate with the current times?

We conceived Blindness as a light and sound installation because government regulations in the summer of 2020 did not allow us to have Juliet on stage.

When the Donmar Warehouse opened its doors to an audience, it was the first venue to do so. London still felt like a ghost town; lots and lots of shops and restaurants closed. We had all come out of the first lockdown and lots people were suffering from loss of lives in their families and amongst friends. However, there were also small signs of hope.

All of us, in different forms, were affected by the pandemic and the disastrous handling of the response by the UK Government.

Blindness will be shown at the Adelaide Festival 19 months after we produced it. It has remained the same show which has toured the world over the last year and a half. Of course, the world has changed and we are in the middle of the Omicron wave now, so I still think people will experience the show through the COVID sense, but I am also intrigued whether in the future audiences will recognise the metaphorical element of the piece which, beyond a pandemic, asks the question: Who are we as a human species, and how do we respond to situations of crisis? Do we act selfishly or do we look out for each other?

The installation also seeks to challenge stereotypes and misconceptions about blindness. What did you learn from speaking with visually impaired production consultant Professor Hannah Thompson?

We are caught in clichés in how we use language. Professor Hannah Thompson describes “blindness gain”, which turns everything on its head. In her blog post about Blindness, she said sitting in utter darkness for her felt like a liberation.

Art can show empathy and show a different perspective on how we live. Hannah talks about walking with her sighted husband and that she can see more than him ­– I love that.

I was initially worried the conversation with Hannah would be a Saramago bashing. But it was really important to hear what this novel means within the blind community. It definitely has made me much more sensitive to other projects I would do now, if they were speaking about a community that I wouldn’t know about.

What type of feelings and responses do you hope it will evoke in Adelaide Festival audiences?

I am hopeful that audience will experience a very immersive show, which will evoke memories, fears and hopes of the last two years. It is a dark show, but at the same time tells the story of extreme bravery and ultimately hope. I think my wife described it best, as a cathartic experience. But most of all, I am really intrigued to let audiences have their own response.

This is an edited version of an email Q&A with Walter Meierjohann.

Blindness is at the Queen’s Theatre from February 23 until March 20 as part of the 2022 Adelaide Festival program. To accompany the installation, Donmar produced a podcast (here) with Simon Stephens and Professor Hannah Thompson discussing representations of blindness in José Saramago’s novel, and the adaptation of the work.