On the evening of May 10, 1972, around 11pm, Dr George Ian Ogilvie Duncan disappeared beneath the surface of the Karrawirra Parri / River Torrens and drowned. This particular stretch of river and parkland behind the university had a reputation; each night after sunset, it became one of the city’s premier gay beats, frequented by men seeking a kind of intimacy criminalised under South Australian law.

But places like these also drew another group of men, many with police badges, whose late night targeting of gay men could occasionally (and allegedly, for no one has ever been convicted in relation to Duncan’s killing) include more brutal forms of extrajudicial punishment – like being thrown into a river.

A shy, devoutly religious legal academic who arrived in Adelaide just weeks before his death, Dr Duncan kept a relatively low profile in life. But in death, he became a rallying point for South Australia’s gay and lesbian community, whose campaigning eventually brought about nation-leading legislation decriminalising homosexuality in 1975.

As a brief resident of Adelaide in the early 1980s, author Christos Tsiolkas recalls Duncan’s death being “in the ether” of the city’s queer community, but he was first struck by the story much earlier. 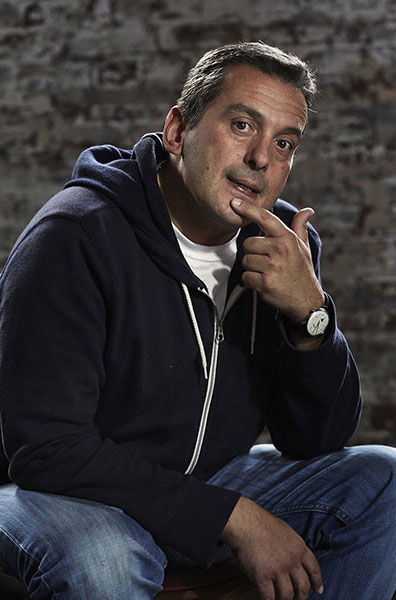 Christos Tsiolkas: ‘We want to create a work that honours this man who died.’ Photo: John Tsiavis

“I was 10 in 1975, and hearing about law reform in South Australia, I remember it being absolutely galvanising – even if, of course, I would not have put it in those terms when I was 10 years old. It was almost like a little secret I could keep with me, that somewhere in this English-speaking world there was an acknowledgement of who I was – even if I didn’t have the words to acknowledge [it] myself back then.”

Half a century after Duncan was thrown into the river, Tsiolkas, playwright Alana Valentine, composer Joe Twist and director Neil Armfield have created a musical tribute to Duncan’s life and unintended legacy. Watershed: The Death of Dr Duncan is an oratorio that leans into the devotional history of the form in rejection of the shame and repression that forced so many men underground and into the night air.

“There’s something beautiful about giving Duncan’s story that sacred space,” Tsiolkas says of Watershed’s “songs of praise”, which in its world premiere at Adelaide Festival in March will be performed by an ensemble that includes the Adelaide Chamber Singers, a chamber orchestra led by conductor Christie Anderson, and a dancer.

“It’s not a church space, that’s not what we’re interested in doing, but we are not outside the sacred.”

In writing the libretto, Tsiolkas and Valentine drew on research compiled by Adelaide historian Tim Reeves, whose decades-long study of the murder brings a nuanced understanding of Ian George Duncan the man.

“He’s done that hard yakka, that hard work,” Tsiolkas says of Reeves, whose forthcoming book The Death of Dr Duncan (Wakefield Press) will also be published this year ahead of the 50th anniversary.

Of particular importance was a suitcase of Duncan’s personal papers once held by the state coroner’s office – and destroyed in 2012 under the authorisation of SA Police. Fortunately, its contents had been transcribed in the early ’90s and kept by Reeves ever since, including a set of letters between Duncan and Dorothy Glover, a close friend and fellow church-goer back in England. These letters, which Reeves describes as “deeply moving – and distressing”, resonated with Valentine and Tsiolkas.

“We thought [it] was just irresistible, the importance of ‘Dorothies’ to all gay men,” Valentine says. “Just after his death in the oratorio the first song is [about] this friend of his, and that’s to say to the audience: there were real people who knew him in all his complexity who grieved this death before he became this ‘homosexual icon’, this ‘victim’ as it were. That was important to us.” 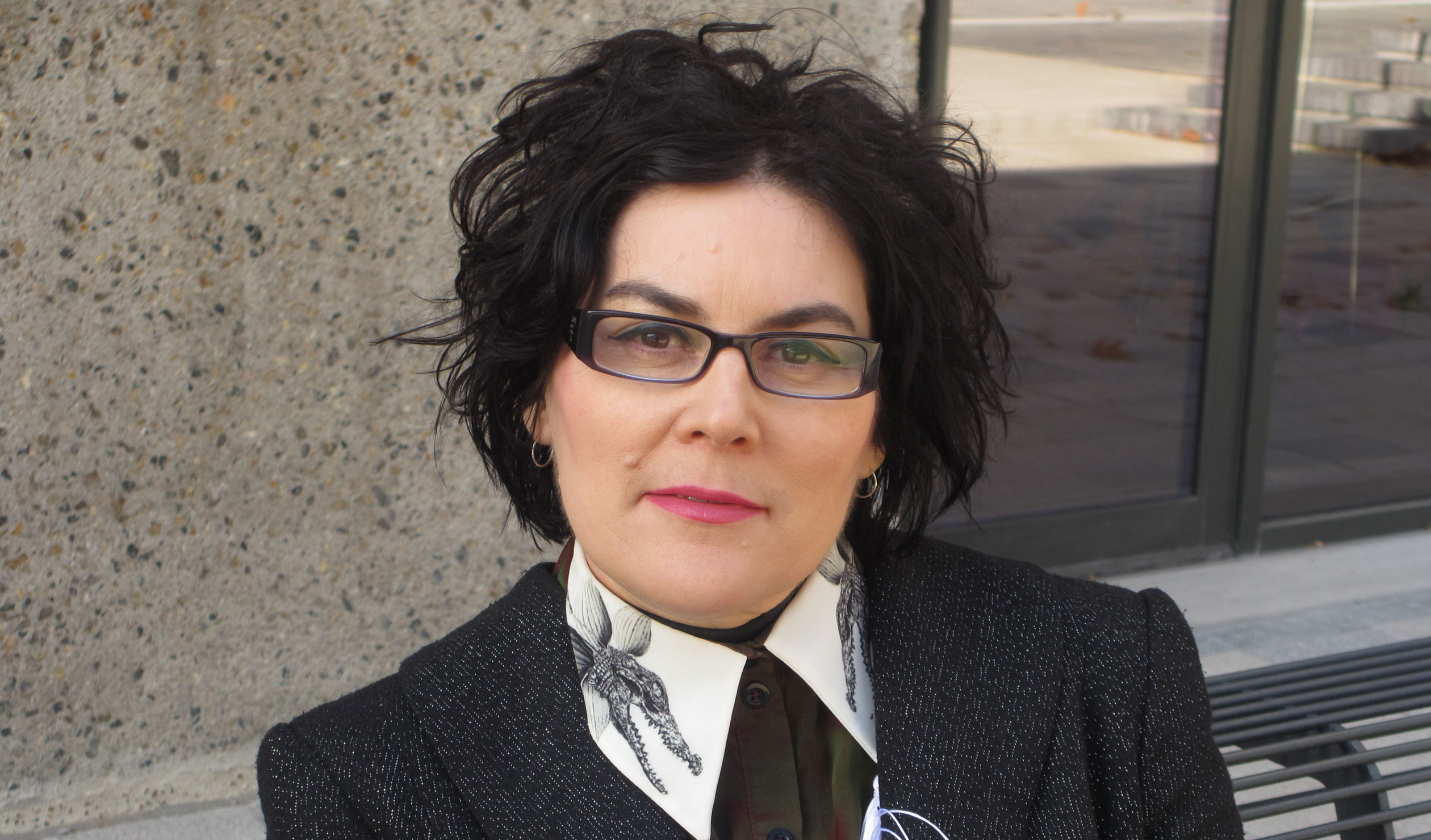 Playwright Alana Valentine says it is important that Watershed be evocative and lyrical. Photo: Vicki Gordon

While Watershed does explore the history-making aftermath of Duncan’s death, including perspectives like that of Dorothy reflects a determination to foreground the personal – and often anonymous – toll inflicted by the previous status quo. 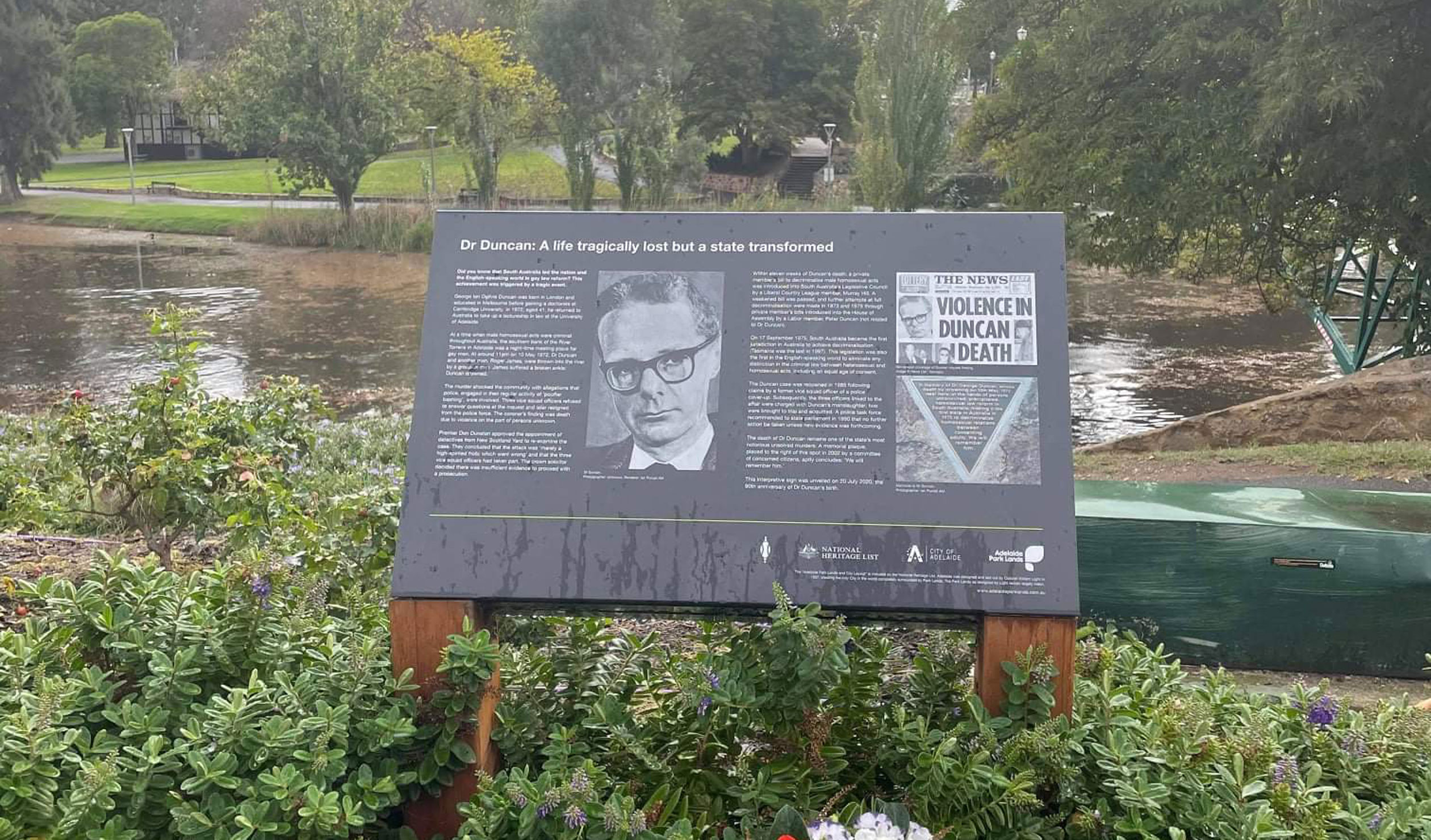 A memorial plaque for Dr Duncan on the banks of the River Torrens. Photo: Adelaide Law School Facebook page

Recent breakthroughs like the 2017 marriage equality vote may have nudged the tragedies and triumphs of last century further into memory, but for many, Duncan’s death and the atmosphere that enabled it remains an open wound. For Valentine and Tsiolkas, Watershed is one way of bearing witness to the battles won, battles still being fought, and the casualties along the way.

I carry a profound rage about the lives that were destroyed. I am angry about what was done to us

“In a way what the piece actually says [is], ‘Is this for good, or is this for now?’,” Valentine reflects. “Both Christos and I, we’re not just about telling stories about the past; it absolutely has to be rooted in some reason to do it today, to look through the lens of the past.

“Neil yesterday talked about a rage that swims very quietly under this piece… I carry a profound rage about the lives that were destroyed. I am angry about what was done to us – how dare they, how dare they presume our humanity is not every bit as important?”

Watershed: The Death of Dr Duncan will be presented at the Dunstan Playhouse from March 2-8 as part of the 2022 Adelaide Festival.

For the love of a fading art