Thinking about how to end the world for her 2014 novel, Station Eleven, US writer Emily St. John Mandel decided on a pandemic. Hers was a fatal flu that killed 99 per cent of those infected but the eerie parallel has made her in demand during the past year.

Speaking on the opening morning of Writers’ Week, streamed into the Pioneer Women’s Memorial Garden from wintry New York, Mandel says she at first resisted the rush of requests to write or speak about pandemics.

“I had this queasy feeling that if I said ‘yes’, and sort of leaned into it, it would seem like I was monetising the pandemic to sell copies of Station Eleven, which I found gross,” said Mandel whose novel follows a troupe of actors surviving in a post-apocalyptic world.

“But after about a week, I thought ‘this is really silly, of course people want to talk about pandemics, we are in this wild historical event’ so I’ve been talking about pandemics for a year and it’s fine.”

But writing about a pandemic was no preparation for the real thing. With a new book, The Glass Hotel, released into the shutdown last March and a 25-city promotional tour cancelled, coping with the daily problems felt very new. New York at the start of the pandemic was also a difficult place to be and it was too stressful to write with 700 people a day dying and a background of ambulance sirens.

“It was this constant soundscape, all through the day and night, and at any given moment you would be hearing more than one at a time from different directions,” she said.

Australian writer Laura Jean McKay, who also streamed into the event from her home in New Zealand, was researching pandemics for her book, The Animals in That Country – winner of this year’s Australian prize for literature – when she fell ill with an obscure disease caused by a mosquito bite.

“The pandemic was a plot device at first, I needed a lot of people in my novel to get sick all at once,” she said. “But there was a parallel to that in that I became sick at the same time.”

Stricken with arthritis, eye lesions, and with the skin peeling from her body, illness permeated her novel.

Mandel said she hoped some of the COVID precautions would endure when the pandemic was over.

“We used to shake hands with strangers during flu season, did that ever make sense?” she said. “It’s so hard to imagine a return to normalcy in New York, although it’s better than it was. I’m watching all these people (in Adelaide) gathering in one place and not wearing masks and it feels science-fictional, I have to say.”

Julia Gillard’s rockstar session yesterday – which ended in a two-hour book signing – strained the limits of COVID protocols with social distancing all but impossible and largely ignored. 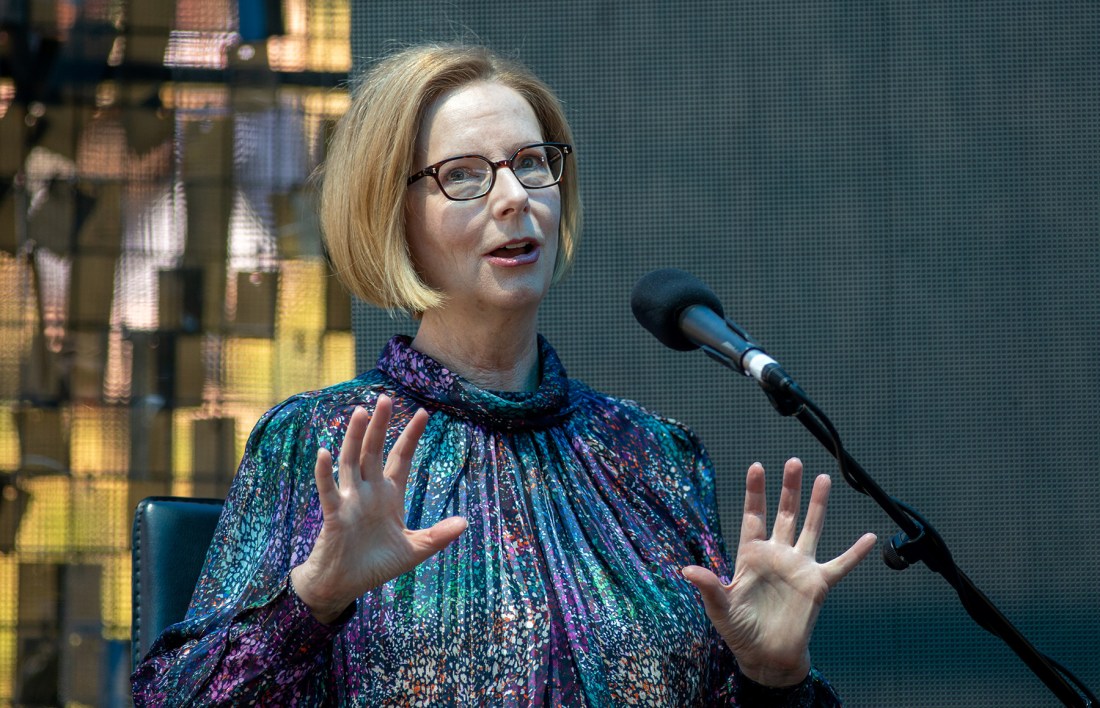 Julia Gillard told the crowd she was appalled by the Government’s handling of rape allegations against a staffer. Photo: Tony Lewis/InReview

Writer’s’ Week director Jo Dyer asked audiences to “keep Nicola happy” and said later Gillard’s session, where she talked about her book on leadership Real Lives, Real Lessons, would be the largest of the week.

“We are making more announcements from the stage before each session asking people to socially distance,” she said.

Gillard, Australia’s 27th Prime Minister, did not disappoint and confessed she almost called her book She’s a Bit of a Bitch, but her co-author, Nigerian economist Ngozi Okanjo-Iweala, who was this month appointed Director-General of the World Trade Organisation, said no.

Gillard, the inaugural chair of the Global Institute for Women’s’ Leadership at Kings College which has opened a base at ANU, spoke first about the rape allegations made by Brittany Higgins and the Morrison Government’s response. On the day after South Australian federal Liberal MP Nicolle Flint said she would leave politics because of the toxic gendered politics, Gillard said there were special factors within Parliament House that put women at risk, including the way in which staffers were employed.

“There is the fact that you go to this place, physically remote from your home and you are there for astronomically long hours,” she said. “Then there is the question of patronage in the political system.”

Gillard, who said she was appalled by the Government’s handling of the Higgins allegations and its aftermath, offered to assist an independent inquiry into workplace culture at Parliament through the ANU.

“We are in the middle of an incredibly important and revealing discussion and one that I hope is a huge impetus for change,” she said.