Most of the custom-designed venue will be on land managed by the Adelaide Festival Centre ­– in the amphitheatre area between the Festival Theatre and the Dunstan Playhouse ­– with part of it extending into the south-west corner of Elder Park.

The planned use of the park requires approval from the Adelaide City Council, which will discuss the application tomorrow.

Although the Adelaide Festival has hosted a range of different festival clubs over the years – including the hugely popular Barrio, Lola’s Pergola and, most recently, the Palais – co-artistic director Rachel Healy told InDaily the new space would be unique.

“It will be distinctive and it will have its own personality,” she said.

“We’re obviously conscious of the incredible legacy of festival clubs that the Festival has run and so our aim is not to repeat ourselves but to create something that has its own unique character.”

The Festival Club will operate for 17 days during the February 26 – March 14 Festival. It will have capacity for up to 1430 people, but is likely to operate with only half this number under current COVID-19 restrictions.

A team of architects, designers and builders has already been appointed to design the space, which will have a stage for live performances and several bars, the main one of which will be undercover.

It will also serve food, with Healy saying the Festival is “talking to a range of catering companies and food trucks and others to see what will be the best model to provide food to patrons”.

Healy, who first spoke of plans for the new club in an interview with InDaily in August, said today it was intended that the pop-up venue could be packed up and reassembled again during the Festival in 2022 and 2023, the final year of her and co-artistic director Neil Armfield’s tenure.

As well as being a space where patrons can socialise, it will also be the venue for the Festival’s contemporary music line-up (set to be announced with the rest of the program next month) and events such as Breakfast with Papers and the lunchtime Festival Forums.

The decision to create the club was a direct response to the challenges posed by COVID-19, Healy said.

“The health authorities told us very, very early that outdoor activities were preferred.

“With The Workshop in 2020, our contemporary music program was essentially happening in a box, right in the bowels of the Adelaide Festival Centre, and it was really clear that that kind of environment was just not going to be possible…

“We put our heads together and thought, ‘Well, if we’re going to create something, we do it in 2021 because we can be responsive to the new world we find ourselves in, but also it can be done in such a way that it can also be a club for us in ’22 and ’23.”

According to the application to the Adelaide City Council, it is proposed that the Festival Club will operate up until 2am on Fridays and Saturdays and the Sunday of the March long weekend.

Notes in the council agenda state that “the Festival Club has been the beating heart of Adelaide Festival of Arts since the 1990s. For 2021, a new Club is proposed for the banks of the River Torrens / Karrawirra Parri, taking pride of place at the amphitheatre between the Festival Theatre and the Dunstan Playhouse. The open-air entertainment venue will be custom designed as a performance space and include live music, performances, food and beverage offerings.”

Council staff have recommended that an event licence be granted. 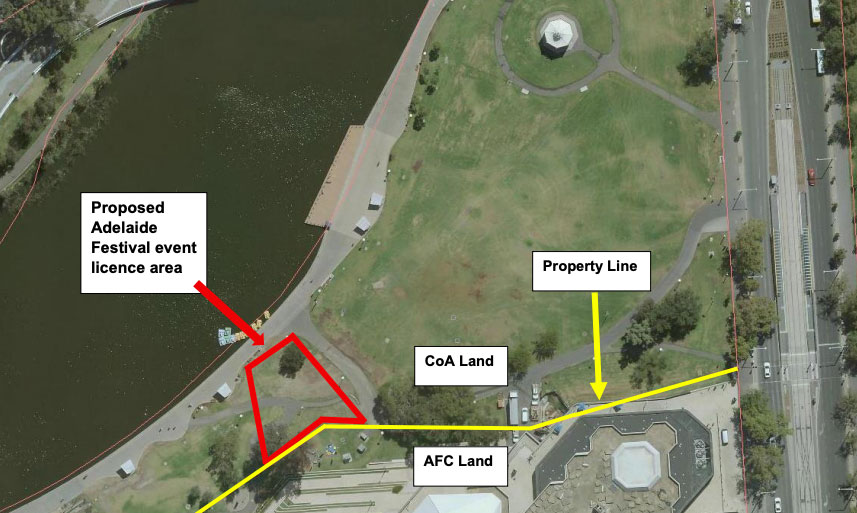 A diagram in the council agenda showing the portion of Elder Park to be used for the Festival Club.

Healy said it already had the support of the Adelaide Festival Centre, with the Festival Club proposed for the same area where the centre presented shows in a Spiegeltent during last year’s Adelaide Cabaret Festival.

She said she and Armfield, who have had to negotiate numerous hurdles to pull together a program for 2021, were inspired when they attended the Darwin Festival in August. 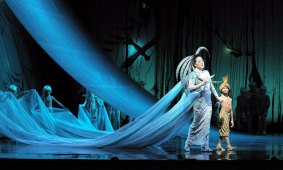 “It was such a reminder of how eager people are to reconnect; I think that’s a real primal, human desire, especially after a period of such prolonged isolation…

“It was just so obvious in Darwin that there is, particularly in the summer months, a huge desire to come together with our community and to celebrate those last beautiful months of summer and enjoy music and the work of artists from our community.”

The Adelaide Festival announced last month that it will present UK composer Benjamin Britten’s opera A Midsummer Night’s Dream (directed by Armfield) as a highlight of its 2021 program, with the full program set to be launched on November 19.