That’s how Rachel Healy sums up what it’s like trying to program an international arts festival in the middle of a pandemic.

Sitting in the boardroom of the Adelaide Festival’s King William Street offices, she’s acutely aware that others in Australia and around the world are facing far greater difficulties due to COVID-19, but that doesn’t lessen the enormity of the task confronting her and fellow artistic director Neil Armfield.

The recent ABC documentary Getting Their Acts Together showed how tricky it can be planning and presenting a festival in an ordinary year – and this year has been anything but ordinary.

“The obvious question that gets asked of us is, ‘Will you go all Australian? Will you focus on local work?’,” Healy says.

“But one of the reasons the Adelaide Festival exists as an international arts festival is because in a calendar of 365 days in Adelaide, almost everything is local or from interstate, and so what we provide in that 17 days are experiences for people who [even in normal years] can’t just get on a plane and go to London or go to Berlin or go to New York….

“There is something in the fact that for 17 days out of 365 – yes, we have extraordinary local work – but we bring the world to Adelaide, and the challenges of doing that this year are just enormous.”

One obvious problem is that arts festivals, venues and organisations everywhere have been forced into hiatus by COVID-19, drastically reducing the number of new productions being created.

Even with works that do already exist and have perhaps been presented overseas, there are numerous barriers stopping them coming to Adelaide. These include travel restrictions and border closures; reduced flights; difficulty securing artists’ visas; the practicality and cost of quarantining artists if they can get here; the almost impossible task of securing insurance, and severely reduced venue capacities for shows.

“If we are able to secure one or two international works, it will be a miracle,” Healy says.

“But we are trying and we are going through every possible process to at least have some kind of international experiences in the program.”

If this was an ordinary year, Healy and Armfield would already have announced the centrepiece work of their program for the 2021 Adelaide Festival, set to take place from February 26 to March 14.

This year’s centrepiece was Romeo Castellucci’s searing reinvention of Mozart’s Requiem, the first co-commission in a three-year partnership between Adelaide Festival and the Festival International d’Art Lyrique d’Aix-en-Provence in France. 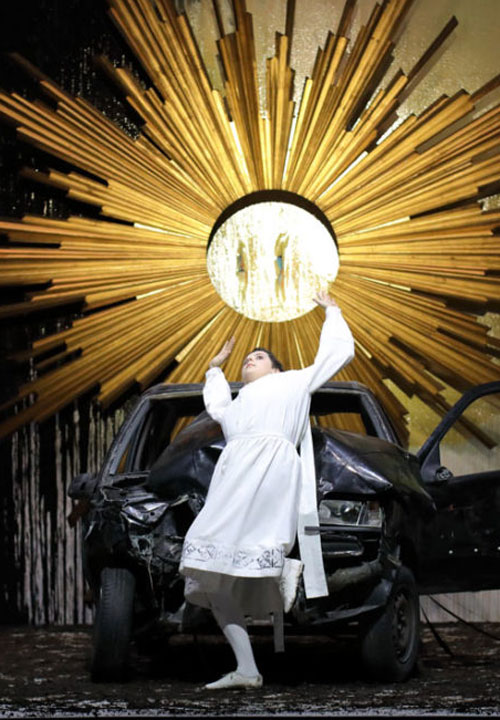 Requiem was the centrepiece of this year’s Adelaide Festival. Photo: Tony Lewis

As part of the partnership, a second major opera was to be presented in 2021 but has been put on ice after COVID-19 forced the cancellation of the French festival.

Healy says Adelaide Festival has worked quickly to find an alternative opera. However, an announcement about this isn’t likely until the full program launch, which is being pushed back two weeks until mid-November.

The printing of the 2021 program may also be delayed until nearer Christmas, to offer more time to lock in shows and respond to the latest restrictions and guidelines surrounding COVID.

Usually, most big shows are confirmed a year or more in advance of each festival. This year, Healy says, around 15 shows across all art forms had been “locked and loaded” for 2021 – “the dance program was completely done and it was bigger than ever” – but were then thrown into doubt by COVID-19.

Among those shows with a long lead time are major new Australian productions being created in collaboration with other arts festivals and organisations around the country – co-commissions like Counting and Cracking (presented at the 2020 Adelaide Festival), The Secret River (2017) and Cloudstreet (2016).

However, severely reduced venue capacities mean some states are reluctant to participate in planned co-commissions for 2021 because they won’t get the box office return to pay for them.

“Of course, we know that things might change – in three months it might be very different – but we’re planning now,” Healy says. “We’re making decisions now and we’re making our budgets now, so we can only work within the best information we’ve got.”

Theatres and other venues in SA can currently operate at half capacity, or one person every two seats, under COVID-19 guidelines. That allows for larger audiences than in NSW, where capacity can’t exceed one person per 4sqm, but it’s still “absolutely catastrophic”, Healy says.

“Two million dollars in our box office is immediately wiped away, and of course it means that (only) half the number of people who would normally come can attend.”

A Festival… but not as we know it

This year’s Adelaide Festival included 73 ticketed events – around half of which were from overseas – with 1205 performances featuring 951 artists from 39 countries.

In 2021, the program will inevitably be smaller, but Healy says there are likely to be more outdoor experiences and events. This will help offset the problem of constraints on indoor venues, as well as reducing health risks.

In addition, the Festival plans to launch a new pop-up venue that will be able to accommodate around 500 people and is designed to be reactivated for 17 days each year.

“With the death of the Palais, we wanted to create something special, a special Festival hub that will last us for the next three years, so that’s a very exciting new initiative and we’re hoping we will be able to program that to the hilt,” Healy says.

“It will be where the amphitheatre was at the Festival Centre – basically where the Spiegeltent was during the Cabaret Festival.”

Healy says the 2021 Adelaide Festival will offer opportunities to see exciting work by local companies “that are working at a scale they haven’t worked at before”.

But at the same time, she adds, organisers are exploring ways of giving audiences “international experiences without necessarily having an entire ensemble come here” – for example, through things such as interactive installations.

They are also researching the option of presenting some elements of the program online.

“One of the areas that’s really being researched closely is in Writers’ Week,” Healy says, pointing to the success of the Hay-on-Wye writers’ event in Wales, which was presented online this year.

“We’re absolutely looking at how we can retain what’s special about being in Adelaide and being with other people, but also optimising some of the learnings from what’s happened this year – that you can involve international writers, artists, musicians from their home countries in a way that is still really interesting and worth participating in.” 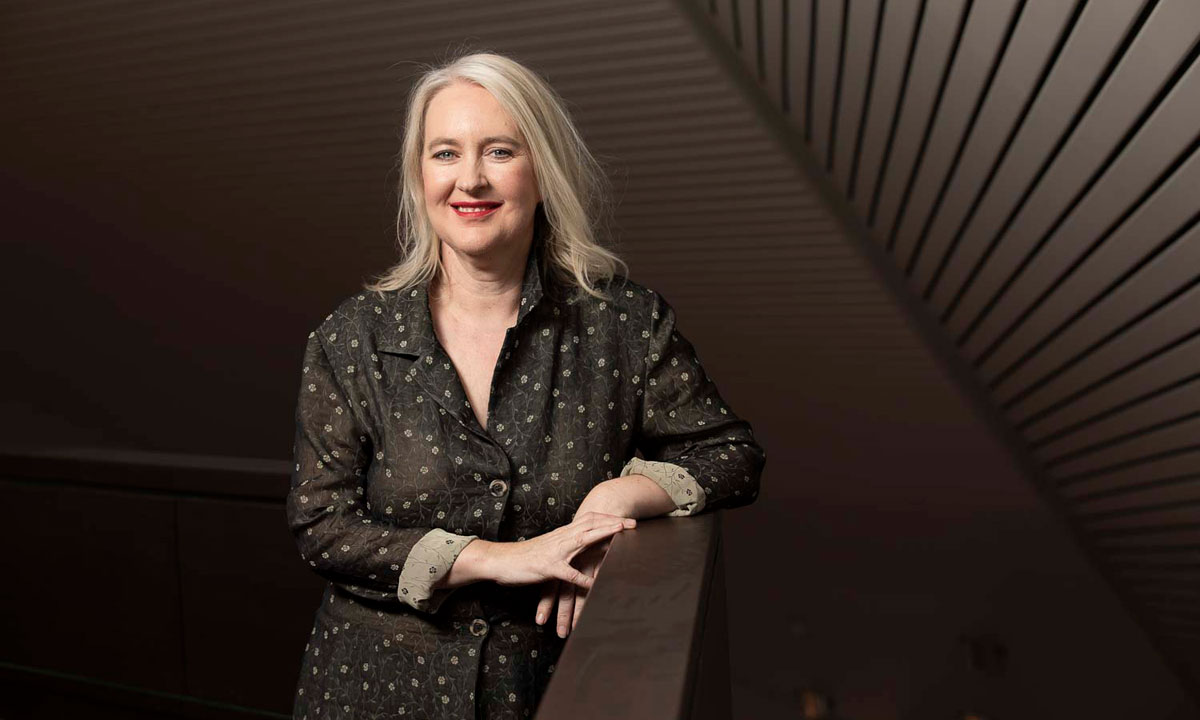 Rachel Healy says trying to plan the Festival during COVID-19 is ‘like a giant Sudoku’. Photo: Shane Reid

Art in the time of COVID

If COVID-19 hadn’t happened, Healy would have been in Scotland this month, seeing eight or nine shows a day at the Edinburgh Festival.

As Getting Their Acts Together showed, she and Armfield usually spend a significant chunk of time between April and September travelling around the world, attending festivals and scoping out potential new work for the Adelaide program.

But with the pandemic restrictions taking effect right after the 2020 Festival closed in March and Armfield based in Sydney, the pair have instead been spending a lot of time on the phone and Zoom.

As the time of this interview, they were both about the head to the Darwin Festival, which for 2020 presented an all-Australian program.

“We’re very keen to go up there and see how the festival is and how audiences are behaving,” Healy says.

“They’ve always done a lot outdoors, and in the program they have a lot of one-on-one events – almost tabletop performances – and things like that.

“Everything they’ve got on the program that’s ticketed seems to have sold out very quickly, so there’s clearly a demand there.”

In September, the artistic directors will attend the Brisbane Festival, which incorporates both more formal festival-style programming and fringe events. Among the events it is presenting this year are a live performance called Throttle, which people can watch from their car, and Street Serenades, a series of pop-up concerts presented from “bespoke stages on wheels” that will tour 190 suburbs.

Just as artists and arts organisations around the world have adapted and harnessed their creativity to meet the challenges of a COVID world, it’s clear that festivals are doing the same.

WOMADelaide is working to present a full-scale festival in 2021

Healy says one thing is certain: the 2021 Adelaide Festival will go ahead.

“It will be different, there’s no question about that, but I think that people have been living in their homes for months and watching Netflix and we’re really overdue to get together…

“It will be a smaller program but we’re hoping that the things that are in the program are going to be as thrilling and as unique as any other program – there will just be fewer seats on sale because of the capacity rules, so people who want to come will have to be very quick on the mouse.”