It’s one of those incredibly still and balmy evenings; the sky is pink and blue above a large crowd gathering at the North Terrace entrance to the Botanic Gardens, taking up at least a hundred metres of footpath either side of the gothic iron gates.

There is an electricity in the air and anticipation among the waiting ticket holders, who are ushered through the gates under the warm glow of lights strung across the garden pathway. We’re then made to wait just inside the gardens for the sun to set.

Ahead of us, the light dissipates into darkness, where large torches of flame, carried by dark shapes, can be seen moving between the foliage in the distance; it’s like something out of Lord of the Flies.

Bats screech overhead and there’s a slow percussive beat from somewhere deep in the garden. Closing time at the Botanic Gardens is normally 4pm, so being here at night is a rare and surreal experience.

With just a slight glow left in the sky, the crowd is finally allowed to move forward into the darkness, past statues lit by flickering flames and towards the sounds emanating from the distance.

This is a chance to choose your own adventure, as pots of fire light the way in various directions towards large features: giant fire orbs, fiery urns, lanterns and pits that all interplay with the features and foliage of the gardens. 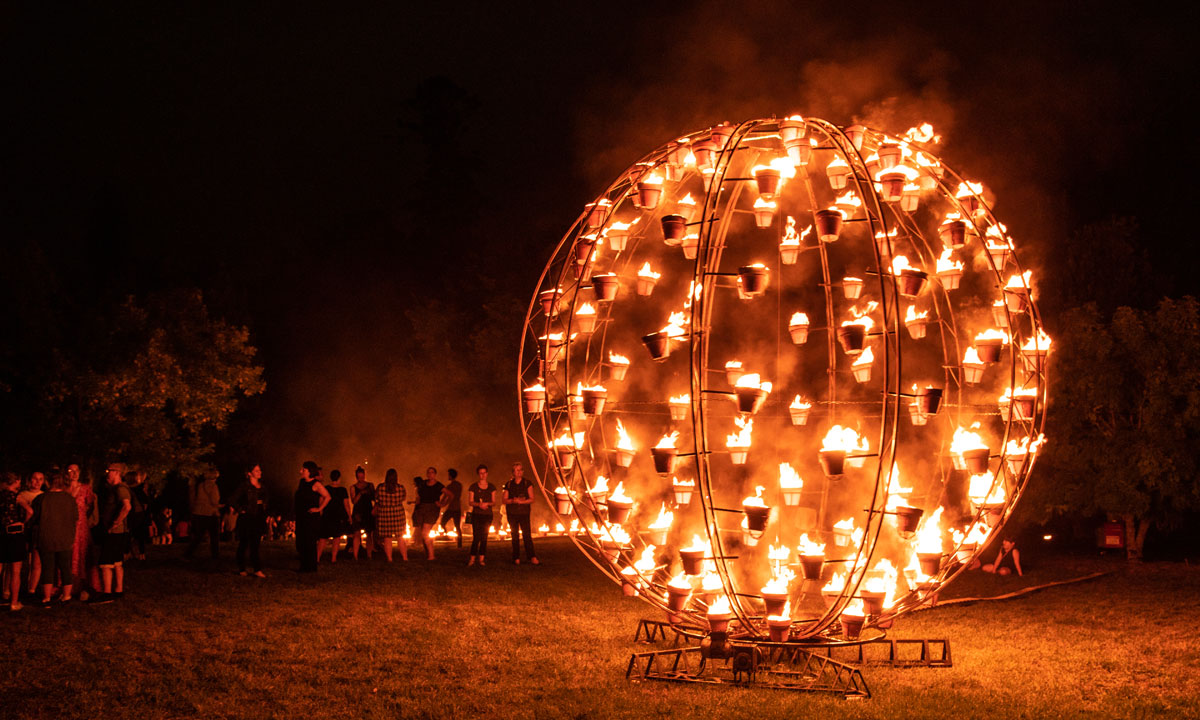 The chaotic hustle of North Terrace is quickly forgotten as you’re enveloped by the darkness into this quasi-movie set, with sculptures that evoke thoughts of gothic scenes and pagan rituals. As the tightly-bundled crowd quickly disperses into the grounds, there is now space to move about at your own pace.

It’s easy to lose your sense of direction. The gardens look completely different at night, until you come across a recognisable feature such as the Palm House, which is a highlight — filled with floating ghostly spectres lit by candles.

Solo musicians are spread out across the grounds, playing along to their own ethereal soundtrack with stringed instruments; a double-bass player is particularly mesmerising, employing delay and effects to produce otherworldly sounds.

Mechanical robots and creatures lurk in nooks and tight garden paths, while a floating orb of flame appears to hover above the lake. 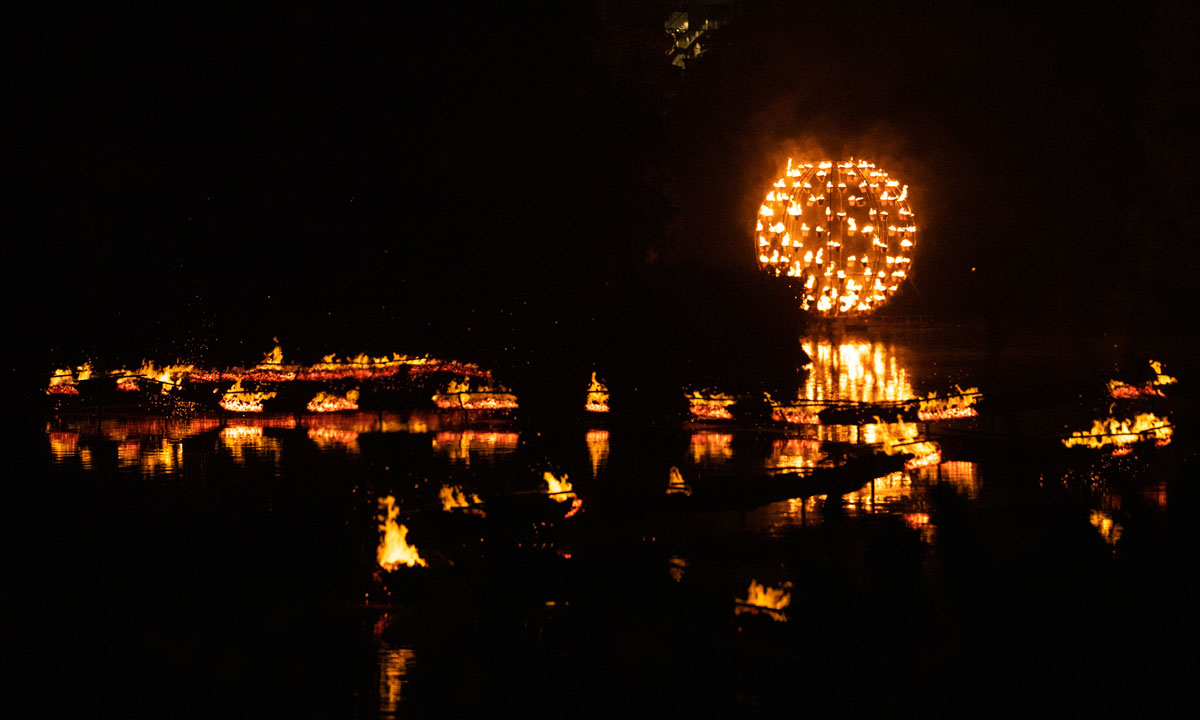 The installation is a rare chance to see Murdoch Avenue after dark — the iconic pathway lined with Moreton Bay figs feels like the set of Jurassic Park thanks to the incredibly still humid air, floodlights, and light drift of smoke.

People are sprawled out on the lawn areas, some stopping to sit or lay. Time passes quickly, and you can easily get lost chasing the large fire installations flickering in the distance.

After being immersed for more than an hour, which has passed in the blink of an eye, we re-emerge to the hustle of North Terrace, which feels like a return to civilisation. 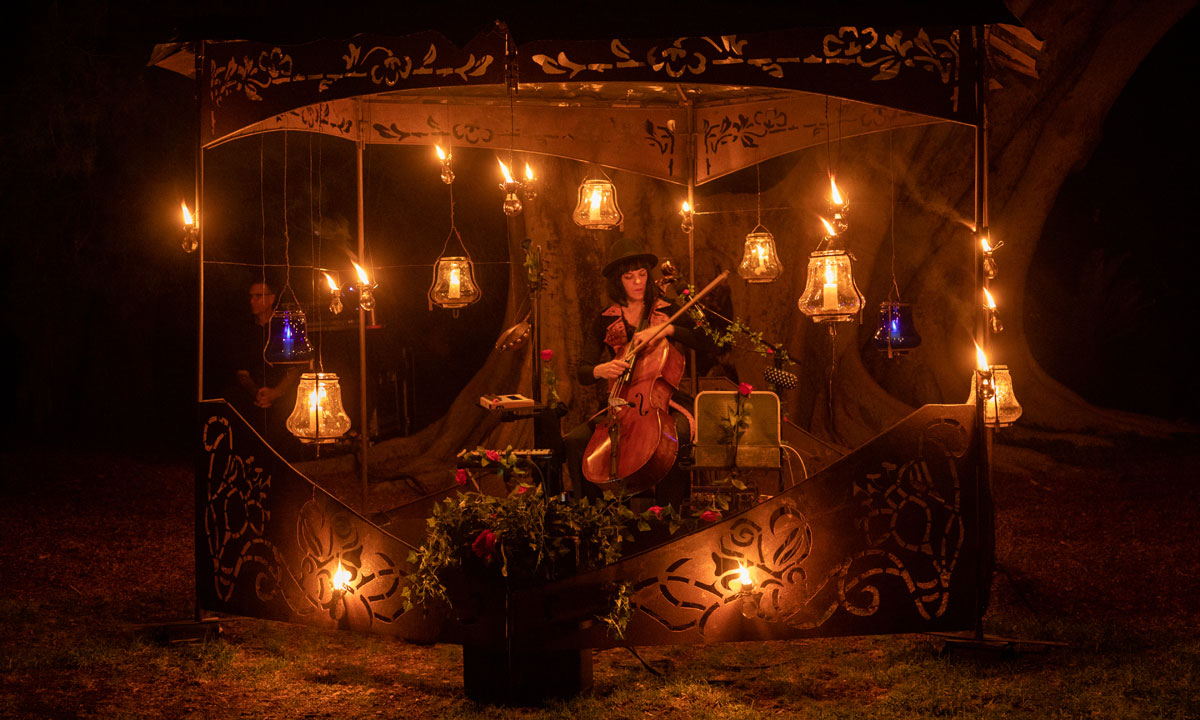 Fire Gardens is being presented nightly until March 15. All sessions are sold out except for on Sunday.