Gurrumul Yunupiŋu was an amazing Australian with an incredible voice who helped bring the culture of the Yolŋu people to the world. Buŋgul (a ceremony or meeting place of dance, song and ritual) is a staging of his final album, Djarrimirri (Child of the Rainbow), created by the Yunupiŋu family on country in north-east Arnhem land.

The result is exceptional, and was realised through the collaboration of two directors: senior Yolŋu Don Wininba Ganambarr and successful Australian theatre and festival director Nigel Jamieson. 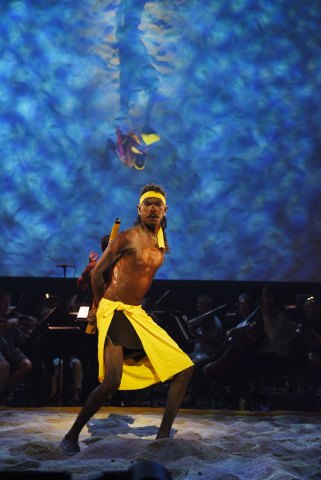 On stage is a shield-shaped sand area for the dancers, who are accompanied by singers and musicians on yidaki and clapsticks.

As the dancers, in ochre and traditional designs, transform themselves into animals and other beings, we see Yolŋu people, also in ceremonial costume, dancing exactly the same dances on country. The effect is startling; this is not a dance company on tour, these dancers would normally be doing this at home, in the sand, with their whole community participating as they have done for thousands of years.

Images of traditional drawing and painting are also screened, which adds to the visual spectacle, while the Adelaide Festival Orchestra’s superb playing complements the traditional songs in a way that symbolises a possible harmony between the two cultures.

It is a treat to see “Djapana” performed in a traditional context, with video footage of a sunset, given that most people would better know the Yothu Yindi rock version. Other highlights include the engaging performance of “Djilawurr” (scrub fowl), and “Djolin” (musical instrument), which reflects the sharing of culture and music between the Yolŋu and the Makassar people from Indonesia.

The concentration in the dancers’ faces reveals their deep inner connection with their land and culture, highlighting the significance of the performance. Only by listening, understanding and cooperating can this country move forward through respectful partnerships.

It was a privilege to be able to see Buŋgul, and the performers clearly appreciated the standing ovation from the Adelaide Festival audience.

The final performance of Buŋgul is at 11am today at the Thebarton Theatre.