Artistic directors Rachel Healy and Neil Armfield said this morning the 2020 Festival – which marks the event’s 60th anniversary – was currently sitting at 91 per cent of its box office target, tracking at $88,551 ahead of the same time in 2019.

The 2019 Festival set a new record with the biggest box office takings in the event’s 59-year history.

British play The Doctor, an Adelaide exclusive directed by Robert Icke and starring stage and screen actress Juliet Stevenson, has sold out 13 performances at the Adelaide Festival Centre’s Dunstan Playhouse.

Other sold-out events include physical-theatre show High Performance Packing Tape; The Sound of History: Beethoven, Napoleon and Revolution, a one-off classical music performance at the Town Hall, and verbatim-theatre work Aleppo. A Portrait of Absence, in which actors will “perform” real stories from residents of the Syrian city of Aleppo.

Healy and Armfield heralded the countdown to the 2020 Adelaide Festival this morning at The Doll’s House, a giant three-storey replica of a doll’s house that has been taking shape in Rundle Mall over the past week and will open to the public on Friday.

Armfield said the site-specific installation, created by Japanese artist Tatzu Nishi, was a fantasy object that would enable people to access their inner child: “It’s a way to create delight and take you back to a moment of happiness.” 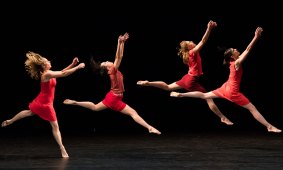 The 2020 Adelaide Festival will present a total of 74 theatre, music, dance, film, writing and visual arts events from February 28 to March 15.