Some argue that art, whatever the medium, has a responsibility to address the zeitgeist. Since words struggle to contain the complexities of transmitting this world-mood, visual art and contemporary dance tend to provide more immediate vehicles for that transmission.

The physical expression of the body in contemporary dance, in particular, allows for a visceral response that would easily be lost in translation. Watching Grand Finale does just that, connecting us with something primal that stirs deep in our collective psyche.

Grand Finale is UK-based Hofesh Shechter Company’s first full-length performance in Adelaide. Israeli-born, London-based artistic director Hofesh Shechter first made his impact on the contemporary dance scene in 2007 with his work In Your Rooms, and his latest work carries all the hallmarks of his signature style.

Ten dancers emerge from smoky shadows on a stark, skilfully lit stage, looking as if they are all that remains of humanity after some post-apocalyptic event. Dark, ominous slabs mark the stage and are moved around to great effect, in turns creating claustrophobic spaces, divisive walls, or monuments of doom. 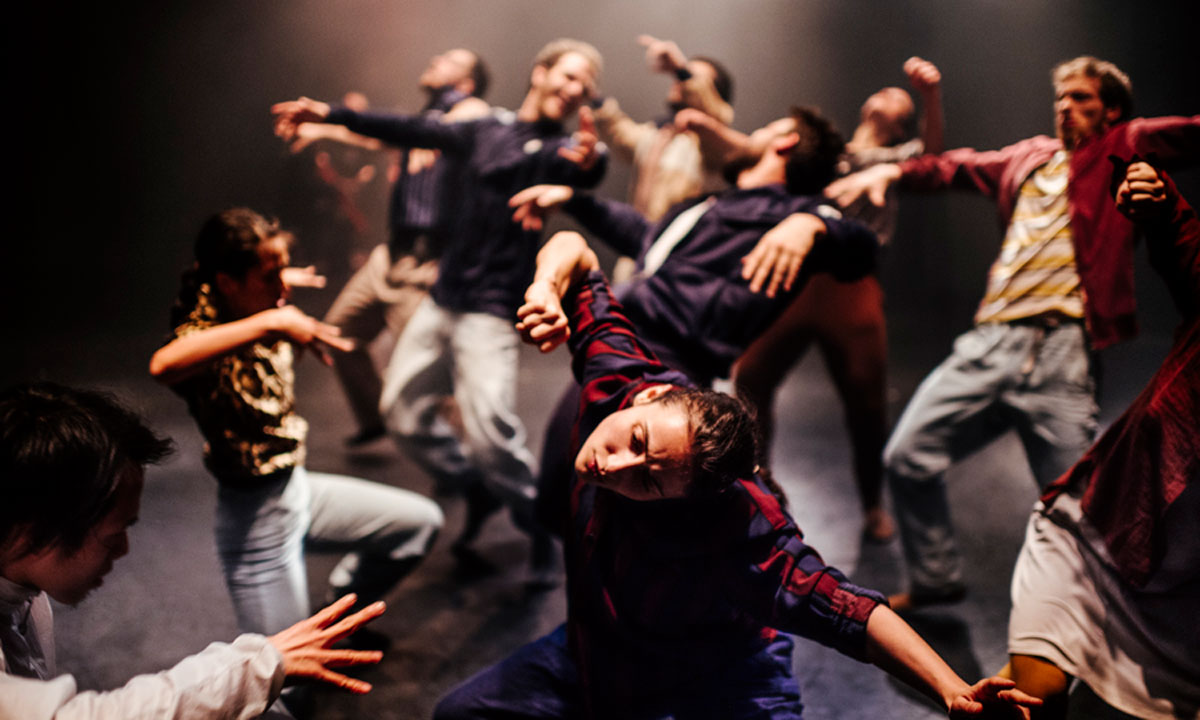 Ecstatic club-style dancing, ritualistic, repetitive ensemble movements and militaristic marches are punctuated by sudden moments of stillness, or broken up by smaller clusters of dancers breaking out in naturalistic movements. Hard, mechanistic motion contrasts with the rising and falling of flailing limbs; bodies flop and are dragged, limp, across the stage.

This alternating and intermingling of hard and soft, of lyrical and mechanistic is amplified by the pulsing electronica and industrial beats that are overlaid and softened by tender waltzes played by the string quartet on stage. The musicians are dressed in white tie and tails, evoking the quartet that played as the Titanic went down. We may all be doomed, but the band must play on.

Grand Finale builds quickly to a crescendo that is sustained for most of the performance, calling to mind the ritualistic dance-to-the-death of Stravinsky’s Rites of Spring.

Humanity is echoed here in hints of global folk dance styles: there are traces of traditional Jewish dancing, Punjabi Bhangra or Irish jigging. There’s a tongue-in-cheek interval that reminds us not to take ourselves too seriously, but the relentless driving movement resumes again in the second half of the work.

At the end of the performance, the pace slows in a sudden capitulation; a series of tender, moving vignettes invite a feeling of pathos and tender compassion for the lost state of our humanity.

This work contains so much of what it is to be human. It is wild, violent, apocalyptic and beautiful; at times even comforting, tender and deeply moving. To grasp the full, astonishing, effect of Grand Finale, it really needs to be seen — there are not enough adjectives that can do justice to this monumental performance.