“Deeply moving”, “visually stunning”, “gripping” and “confronting” are among the terms reviewers have used to describe NSW-based physical theatre company Legs on the Wall’s Man with the Iron Neck during its seasons in Sydney in Brisbane.

“I think they’ve been taken aback by it,” writer and performer Ursula Yovich tells InDaily of the audience response.

“It’s a tough subject and we don’t hold any punches. It’s about getting people to think about how real it [Indigenous youth suicide] is … there’s been a lot of positive response.”

Opening at the Adelaide Festival this Friday, the production tackles the difficult yet pressing issue of Indigenous youth suicide through the story of three young Aboriginal people in a small, AFL-mad Australian town.

They are around 18 – “on the cusp of beginning life and striking out on their own” – when tragedy strikes. One of the surviving youths, Ash, becomes obsessed with an early 20th-century stuntman, The Great Peters – also known as “The Man with the Iron Neck” –  who would jump off bridges with a rope tied around his neck and survive unscathed.

Yovich, who is also part of the cast and whose previous acting credits include the ABC series Redfern Now and Baz Luhrmann’s Australia, says the narrative was drawn from both her own experiences and the original concept by co-director Josh Bond, who was also fascinated by Great Peters.

The physical theatre element – incorporating that classic Australian backyard feature the Hills Hoist – is integral to the performance; it’s used, for example, to manifest in movement the shock of being hit with terrible news.

“I think it works quite beautifully with the dialogue. Sometimes the visual can tell the story much better than dialogue and vice versa.” 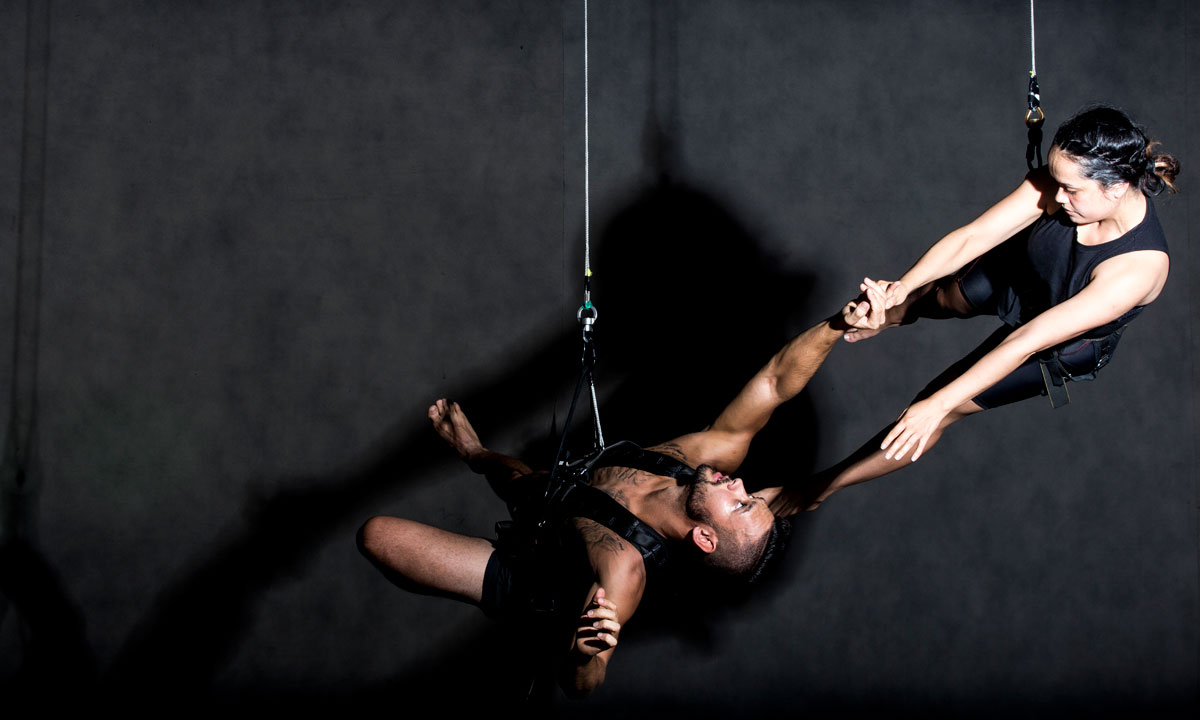 She and Bond see the story of Man with the Iron Neck as one for all Australians, having said in a joint statement that they want people “to acknowledge that there is serious trouble and that we still have a long way to go – but that there is a real way out of this mess”.

Performances at the Sydney Festival began with a list of young Aboriginal girls who had recently taken their own lives. Legs on the Wall has also received support from the Indigenous-owed charity Balunu Foundation, and hopes its work will contribute to suicide prevention strategies.

“It’s not just a black thing, but of course I’m interested in it because of my mob,” Yovich says of the issue.

“We have one of the highest suicide rates in the world. When you have girls as young as 10 committing suicide, it’s a crisis that needs to be addressed.

“I think it’s important we talk about it rather than sweeping it under the carpet.”

Despite the trauma at the heart of Man with the Iron Neck, the theatre-makers want to share a message of resilience and hope, and to encourage those who are struggling to reach out for help.

“In attempting to emulate the feats of the almost-mythical hero, the young man [Ash] is simultaneously confronting and defying death. He is choosing to survive.”

Yovich agrees, saying it is essentially a piece about “choosing to want to live and choosing a different path”.

Speaking to InDaily from Melbourne, where she was performing in another show – Barbara and the Camp Dogs, which she co-wrote – she adds:

“I don’t think I’m ever going to stop talking about my mob.

“I think if you can touch people, it’s kind of like having a heart-to-heart.

“It’s about people walking out and feeling like they know those characters… it’s not just about raising awareness; it’s about getting people to care.”

Man with the Iron Neck is being presented at the Dunstan Playhouse from March 8-11. See more Adelaide Festival stories and reviews here.