The collaboration between Komische Oper Berlin and London-based 1927 – which brought Golem to the 2016 Adelaide Festival – counter-intuitively makes more sense of Mozart’s convoluted, coded story than more traditional productions seen by this reviewer.

The “set” is essentially a white wall, with a range of cut-outs reminiscent of an Advent calendar. This allow 1927’s magical animations to be projected, turning a static singer into a running man; the Queen of the Night into a magnificent spider; a trippy dreamscape for the lovelorn male protagonists.

It’s a masterpiece of technical directing: the singers, chorus and ASO in the pit must sync perfectly with the visuals, which allow, as Kosky has pointed out, a myriad of “sets” – far more than would be technically feasible in a conventional staging.

The characters are all reminiscent of the silent film era, which ended, notably, in 1927. So our hero prince Tamino (Aaron Blake) is Buster Keaton, Pamina (Kim-Lillian Strebel) a Louise Brooks lookalike, the henchman Monostatos (Emil Ławecki) a dead ringer for Max Schreck in Nosferatu, and so on.

The traditionally “sung-spoken” parts of the dialogue are projected as silent movie captions, accompanied by Mozart fantasias played on a fortepiano, sounding for all the world like we were sitting in a 1920s cinema listening to a tinkly, wonky piano. Amazing.

The story has always been one of the more confusing in the traditional opera canon. Tamino is sent on a quest by the Queen of the Night to rescue her daughter, held captive by the apparently evil Sarastro. Tamino is accompanied by the affable but lovelorn bird-catcher Papageno (Tom Erik Lie). In the realm of Sarastro – a kind of Oz-like place in this production, guarded by mechanical monkeys and giant steampunk figures – Tamino, Pamina and Papageno are subjected to trials placed in the way of their happiness (including, of course, a trial of “silence”).

Along the way, Mozart throws in some Freemason numeric symbolism (three ladies do the Queen’s bidding and three boys, brilliantly sung by Ludwig Bachmayer, Gero Horn and Friedrich Von Lewinski, provide timely advice and help to the heroes). Tamino is given a magic flute to protect him (personified by a Tinkerbell-like animation) and Papageno some magic bells (brought to life as cartoonish dancers).

The story is complex and, in many productions, utterly befuddling.

Strangely, though, the animation and the silent movie pastiche make sense of it all in a new way – it embraces the inherent weirdness of the plot. Presented in this way, you can see this a timeless, dream-like fairytale of love and honour, from which you can take what you will. It’s also funny, with 1927’s witty cartoons eliciting plenty of laughter on opening night. 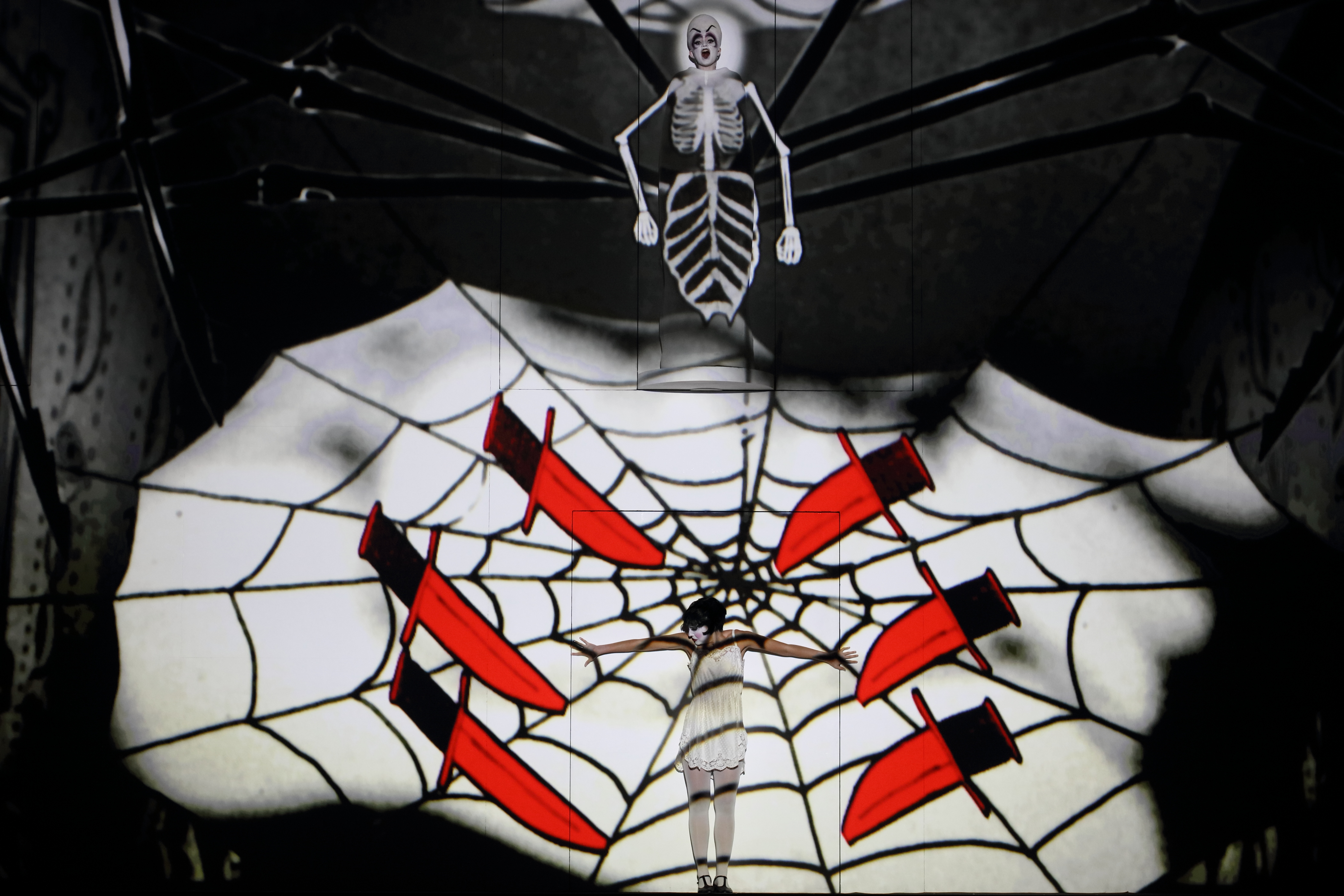 Aleksandra Olczyk as the Queen of the Night and Kim-Lillian Strebel as Pamina. Photo: Tony Lewis

Above all though, as the opera’s name indicates, this is about the power of music – and none can demonstrate this more sweetly, more magnificently, than Mozart.

Aleksandra Olczyk as the gigantic, spider-like Queen of the Night has the show-stopping number: the coloratura tour-de-force that is the measure of operatic sopranos. Her beautifully clear, stunningly controlled performance was a highlight.

Strebel’s performance as Pamina, at first seemingly at threat of being overwhelmed by the aesthetic glory of her stylish Brooks bob and 1920s outfits, was another highlight, with a rich rendering of her arias.

At times I did wish that that cast could be freed from the constraints of animated interaction: they did occasionally appear like specimen butterflies, pinned to set while cartoons exploded in colour around them. But, overall, the staging offered a big pay-off.

And, taken as a whole, there was no compromise between style and substance – they work hand-in-hand.

As with Kosky’s production of Saul, one of the highlights of the 2017 Festival, The Magic Flute melds fresh ideas with a venerable piece of art in a way which, in the end, makes something both new and enduring. I like to think Mozart would be tickled at the idea that his lesson in the power of the rational over the superstitious would be brought to new audiences in such psychedelic fashion.