Nigerian poet, novelist and Man Booker prize winner Ben Okri reflected on the necessity of imagination, so imperative in these complex times, in his Imagination Redeems Writer’s Week address.

“We accept our condition and hurry about our lives,” he said, adding that this is a sorry ailment of being human.

“It’s a freedom we have to go about living in un-freedom.”

And while taking in his words on the shackles of poverty and topics such as racism and bigotry and toxic misogyny, it was impossible to stop looking around the room at the Anglo audience who can probably afford to spend $30 on a book and, the following week, perhaps, another $30.

I want to imagine a room full of diversity in skin colour and class, a room in which Behrouz Boochani (the Iranian-Kurd author who, despite winning this year’s richest literary prize in Australia, could not attend the award ceremony because he’s imprisoned on Manus Island) can sit beside JM Coetzee (yes, Adelaide does sport a Nobel Prize winner in Coetzee).

Should this be so far-fetched? After all, Adelaide Writers’ Week is the only free literary festival in Australia that supports such international heavy weights as Okri, as Canada’s Esi Edugyan (shortlisted for the Man Booker) and human rights activist Kassem Eid – a Nigeria-born poet, a black female novelist and a Syrian refugee.

In her first year as director of Adelaide Writers’ Week, Jo Dyer’s programming is panel-driven and politically charged, with the theme of Telling Truths reflective of our world in its current tumultuous state.

As Okri – the author of books including The Famished Road and recently published  new novel The Freedom Artist – pointed out in his address, there is no greater catalyst for imagination than fear: our leaders clearly know this, and our literature is clearly combating this. 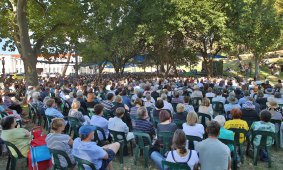 “The strength of freedom,” he said, “is dependent wholly upon the power of our imagination.”

Last night’s event was a precursor to what looks to be a feisty festival – even Dyer’s acknowledgement of the land we were meeting on was proof of this, as she more or less issued a call to action following the traditional statement we’re so used to hearing.

“The world is what it is because we have dreamt it or failed to dream it at all,” said Okri.

I, for one, am ready to listen to the dreamers all next week.

Heather Taylor Johnson is an Adelaide poet and novelist.

Adelaide Writers’ Week runs from March 2-7 at the Pioneer Women’s Memorial Garden. Ben Okri will take part in a session at 1.15pm on Saturday and a poetry reading on Monday afternoon. See the full program here.