When durational theatre-slash-live-film work The Second Woman comes to Adelaide Festival this March, it will be its fifth and final performance.

Devised by performer Nat Randall and director Anna Breckon, it premiered at Melbourne’s Next Wave Festival in 2016. Since then, in its few subsequent showings across Australia, it’s gathered strong critical acclaim.

The work’s set-up is deceptively simple. Over 24 hours, in front of an audience and a crew who film and live-project the onstage action, Nat repeatedly performs one 10-minute scene.

In each iteration of the scene, almost everything remains the same – except, while Nat lines up again and again to play the character of Virginia, the role of Marty is always inhabited by someone new. The scene replays 100 times and there are 100 different Martys.

Every performer who takes on the role of Marty is male-identifying and local to the city where the performance is taking place. Each is given a script to learn, but never offered the chance to meet Nat or rehearse the scene with her.

As the scene repeats, the constancy of its trappings – the dialogue, the plot points, the staging – magnify the decisions made by Nat and the men she performs alongside.

“It’s a really interesting survey that is at once very entertaining, very beautiful, very sad, and confronting at times,” says Nat.

“That’s what you get when you combine this structured model with the potential of anyone coming into the room and there being any number of ways in which people might present their version of the male character and then subsequently what I might respond with.

“That model is really great in revealing not what people say, but how they say it. It produces different ways in which men and women behave in certain moments.” 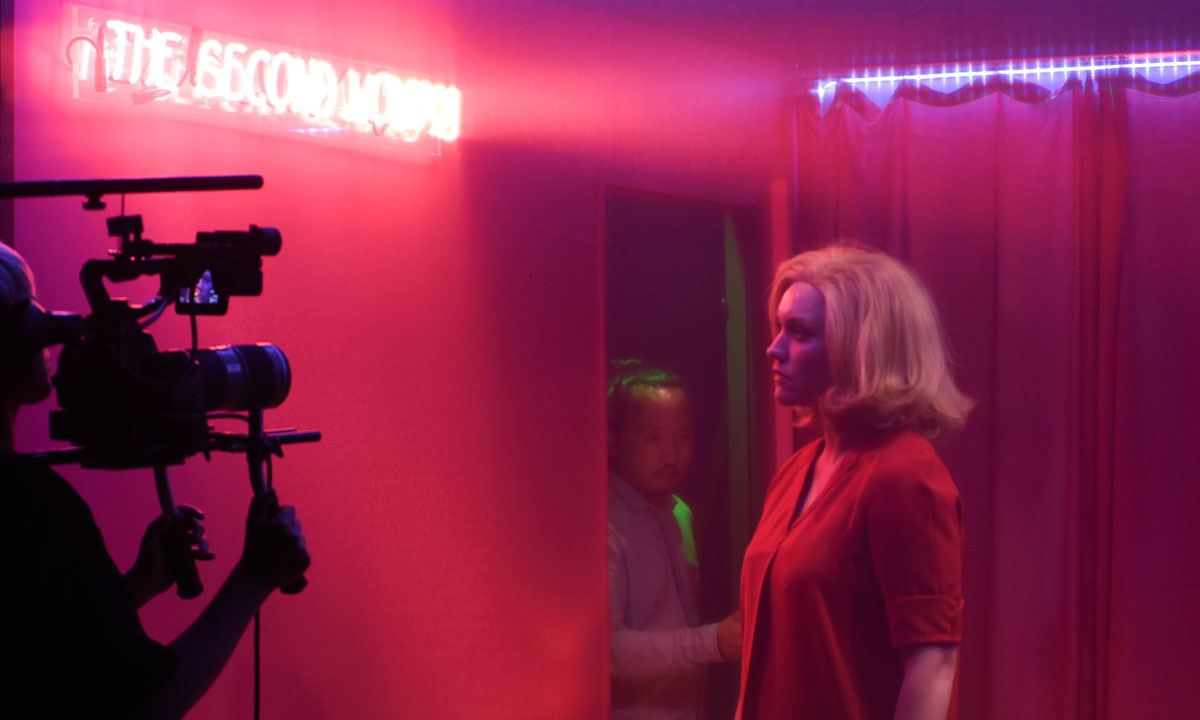 Performing The Second Woman is a a physical and emotional feat. Photo: Heidrun Lohr

Performing the show – spending 24 hours on stage reacting to the surprising actions of others while constantly drinking whisky as the scene is repeated over and over – is a physical and emotional feat for Nat.

“Those are complicated feelings when you come away afterwards,” she says.

“There are these moments where you truly connect. A genuine connection with someone is kind of overwhelming in a really beautiful and freeing way.

“And then sometimes you come across someone that might be perhaps too aggressive, or you might find someone incredibly funny and the 10 minutes goes quite fast. There is this multitude of emotions. I think that’s true of the audience experience, but certainly felt through the team and as a performer in it.”

Still, the somewhat gruelling nature of mounting The Second Woman is not the reason behind its Australian retirement, which will come after the Adelaide performance.

Throughout The Second Woman’s three-year life, Anna and Nat have constantly developed and finessed the work. When they perform in a new city, they bring on a new local crew of female and gender non-binary workers to fill roles like stage manager and camera person. They form collaborative relationships with these people, incorporating their new ideas into how the show is executed.

It’s an intellectually-intensive process, and Nat says she and Anna are both ready to be “making different work, making new work”.

The power of The Second Woman’s form may, however, live on beyond Australia. Last year, Anna and Nat worked with actor Zhu Zhi-Ying to perform the work in Taiwan, where it painted a vastly different picture to that which emerged in Australia.

“Watching it, I realised what the work was for the first time,” says Nat. “That’s something that Anna has always known, but I was learning so much more because I’ve never been outside of it.

“That was a really quite beautiful experience, giving it a completely different life of its own. It bears many similarities, but it’s also incredibly different and speaks to a very different relationality between how men and women express themselves in different cultural contexts.”

If there are other opportunities in Mandarin-speaking cities, says Nat, that version of the work may live again. But even if that never happens, for the hundreds of people who saw and performed in The Second Woman’s handful of Australian iterations, it will have lasting life as a haunting reflection on our country’s gendered reality.

The Second Woman will be performed as part of the Adelaide Festival, with its 24-hour stint beginning at 4pm on Sunday, March 10.