As the film screens at the Adelaide Town Hall, the original composer, Benoît Charest, re-creates his jazzy opus by bringing to the stage Canada’s Le Terrible Orchestre De Belleville. They’re so good at what they do (brass, percussion, strings, vacuum cleaner – yes vacuum cleaner – bicycle spokes and newspaper) that you want to watch them, but of course there’s a film rolling above, and it’s a very special film.

With minimal dialogue, The Triplets of Belleville tells the story of a kidnapped Tour de France cyclist and the wild adventure his unflappably persistent grandmother Madam Souza and faithful dog Bruno endure in order to bring him home.

Three very old jazz singers (the triplets) help Madam Souza and Bruno rescue the cyclist from the French mafia, who are sinister in their murderous gambling practices and in their rectangular builds. The highlight of the animation is the grotesquely exaggerated features of all the characters: the cyclist is thin as a pin with bulging calves, dark-rimmed eyes and an enormous beak of a nose, and the waiter ridiculously bends over backwards (literally) to please the mafia boss-man. 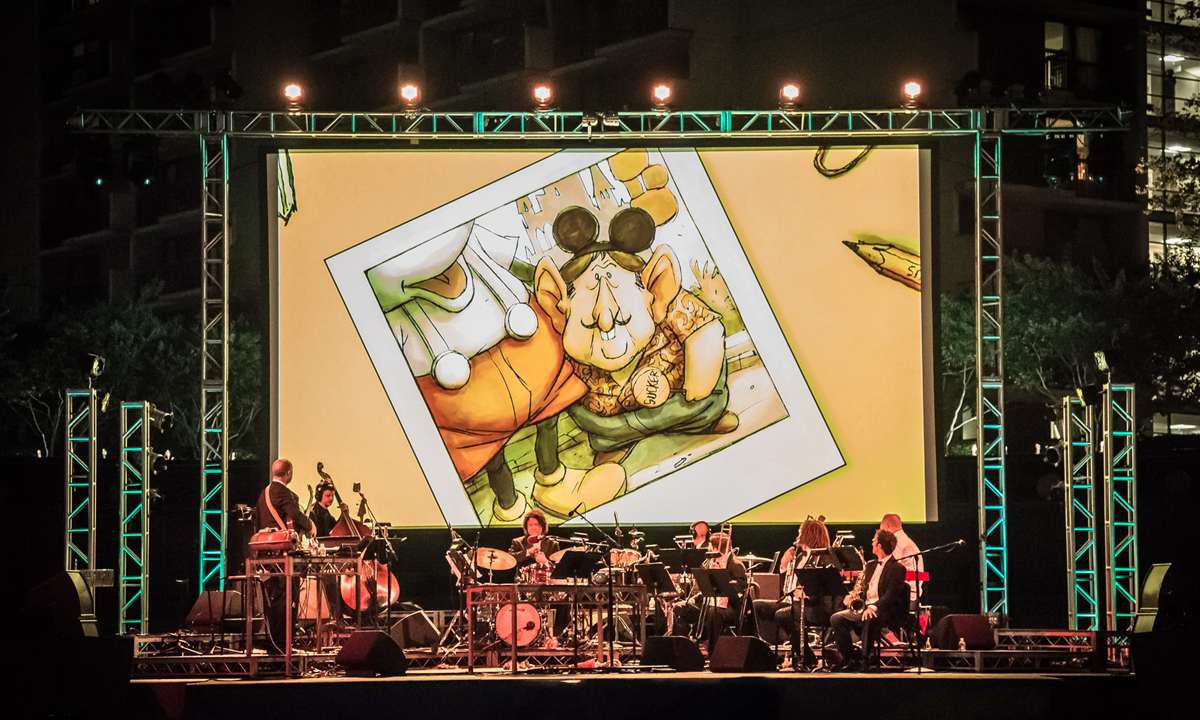 It’s impossible to look away – unless, of course, your eyes are drawn downward to the musicians on stage who sometimes clap, sometimes stomp, sometimes call for audience participation.

What the ensemble lacks in female performers (there are no female performers), the film makes up for in female heroes. Madame Souza and the triplets of Belleville cleverly and somehow casually save the day, and it’s a creative capture, fitting of a film that bursts with creativity.

This is a visual, audio and cerebral undertaking and it really makes you feel fantastic. I love it when a show of this calibre comes to Adelaide and I leave the theatre thinking about how lucky I am to live in a city that hosts a world-class festival that surprises every year.

The only negative of the night is that no one was selling the CD at the venue. Then again, what a mad scramble that would’ve been.

The final performance of The Triplets Of Belleville is being presented at the Adelaide Town Hall tonight. Read more InDaily Adelaide Festival stories and reviews here.