Sprawling across around 150sqm in the downstairs entry space of the Biennial exhibition at the Art Gallery of SA, Adelaide artist Roy Ananda’s Thin walls between dimensions installation makes quite an impression.

If it feels a bit like you’ve entered into the 3D embodiment of a fanboy’s vivid imagination – a kind of fantasy realm made real – that’s because you have. It is Ananda’s own underworld.

“I had just finished a master’s research project into pop culture fandom [when 2018 Biennial curator Erica Green asked him to create a work for the exhibition], so it seemed logical that my next major work would be something that was close to my heart in terms of pop culture,” Ananda says.

Pop culture has always been a strong feature of Ananda’s art, and Dungeons & Dragons in particular looms large in his life – he started playing the role-playing fantasy game when he was 10 years old. Luckily, his wife is also a fan.

“Playing it from such a young age and visualising all these imaginary spaces, it’s had a big impact on me and my sculptural practice even when the work wasn’t explicitly referencing the game,” he says.

Thin walls between dimensions is a visual representation of a map that was part of an early iteration of Dungeons & Dragons in the late 1970s. It comprises 48 CNC-routed medium-density fibreboard panels, some of which feature numbers and enigmatic text, plus around 250 timber arms that create all the angels, and several thousand screws.

“It represents kind of an underground maze that the characters could go into and explore and fight monsters and get treasure and glory and so on,” Ananda says.

“Basically it represents a space that probably tens of millions of people have inhabited in their imagination.

“Even though it’s from this very niche part of pop culture in a way … I hope that others will relate to it as well.”

Thirty contemporary artists are exhibiting in the 2018 Adelaide Biennial of Australian Art, with works on show at the Art Gallery of SA, Samstag Museum of Art, Jam Factory and Adelaide Botanic Gardens in media including photography, painting, sculpture, installation and moving image.

Erica Green says the theme for the Biennial, Divided Worlds, was chosen after talking with the artists about their disparate concerns.

“I think that an exhibition like this brings together a fantastic diversity of artists and works of art from all across Australia – different genres, different generations – so I’m really looking to provide a spectrum of what’s happening in Australian contemporary visual arts,” she tells InDaily.

Divided Worlds immediately conjures thoughts of conflict, and while some of the works do reflect this – Khaled Sarsabi’s hand-painted photographic series 99 Names, for example, is about the 33-day war in Lebanon in 2006 – other artists have interpreted it through works exploring difference and diversity in a world divided.

Angelica Mesiti’s video work, Mother Tongue, explores the social impact of the influx of refugees in Denmark, while Indigenous artist Douglas Watkin’s A Thin Black Line virtual-reality work tells the story of how, as a child, his mother and her family were forced to leave their home in Darwin during the World War II Japanese air raids.

The Art Gallery of SA’s Biennial exhibition layout plays on the Divided Worlds theme with a dark downstairs display space from which gallery-goers ascend to a much lighter, whiter space upstairs. 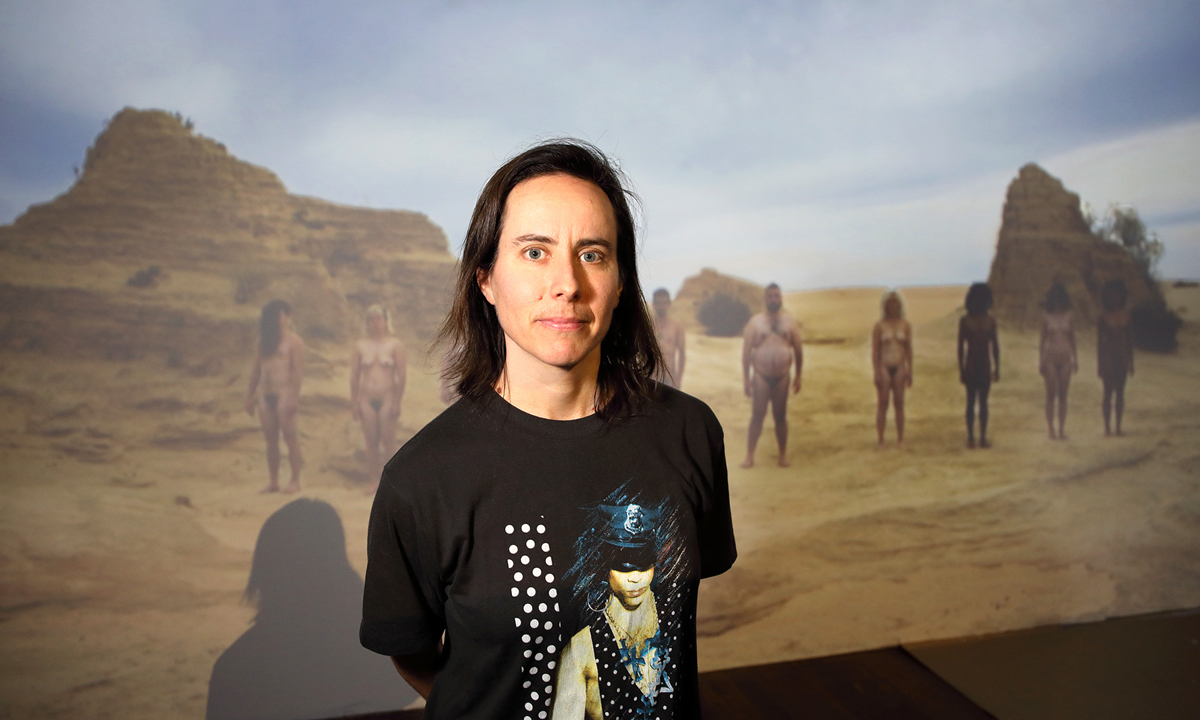 Among the other artists showing work downstairs is Amos Gebhardt, whose video installation Evanescence immerses the viewer in a square room with four large 6.5m-wide projections of images that play on a loop.

“As the title suggests, it’s a study on impermanence,” Gebhardt tells InDaily.

“I’m really interested in looking at the way the cycles of birth and death orientate us within the natural world … I’ve photographed an ensemble of 40 performers in these remnant wilderness locations.”

The locations, in Victoria, include a salt lake and a waterfall in a forest. Gebhardt deliberately chose a diversity of people and bodies to participate in the work, which sees ritual dance movements unfold on screen.

“I work a lot with the naked human form and I was interested in this work to represent the form of humanness almost rearing up out of the Earth’s crust, so it’s like this almost living sculpture coming out of the Earth … I’m trying to indicate a kind of spiritual connection between place and humanness.”

Gebhardt also has another video installation at the Samstag Museum, which exposes the intimacy between horses during mating season. 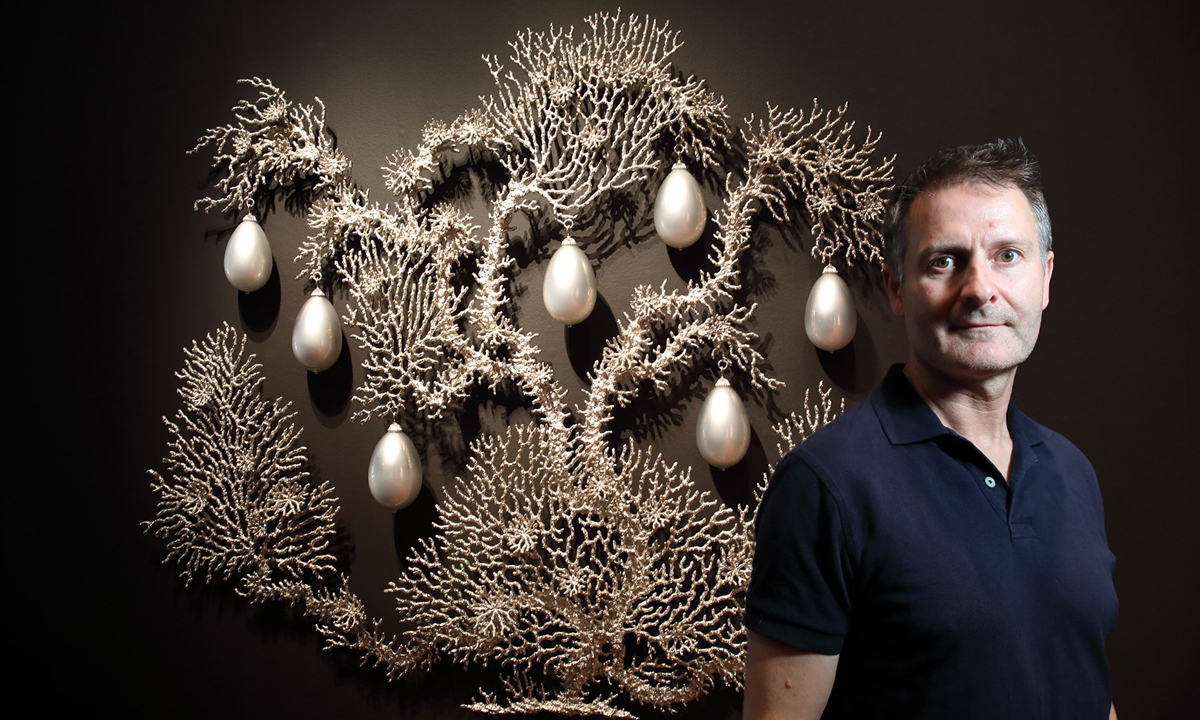 Timothy Horn with one of the works in his Adelaide Biennial series. Photo: Tony Lewis / InDaily

Another artist inspired by the environment, but working in a very different medium, is US-based Australian Timothy Horn, whose beautiful hanging sculptures in the Art Gallery of SA seem to glow against the black walls on which they are mounted.

Inspired originally by the patterns of 17th-century jewellery and later by natural forms such a trees, lichen and coral, Horn creates his structures in wax or plasticine; they are then cast in bronze and plated in nickel. The luminescent pearls are made of mirrored blown glass.

One of the works on show, Gorgonia 5 (full fathom five), which features coral patterns and is part of the gallery’s collection, was inspired by his visit to the Great Barrier Reef in 2008.

“I’d been there as a child and had fond memories of going to places like Hook Island … since that time it’s been really distressing and disturbing to read accounts of coral bleaching and disappearing with fluctuations in temperature,” Horn says.

There will be a series of free talks, forums, performances and other events as part of this weekend’s vernissage (details here).