My introduction into the thespian upstage-downstage world is as an extra in the world premiere season of Memorial in this year’s Adelaide Festival.

We are part of the momentous community engagement that SA theatre company Brink Productions has nurtured for months, involving a number of local choirs, and now volunteers who have enlisted to swell the numbers and create “a mass of humanity”.

Memorial takes on stage the book-length poem by English poet Alice Oswald, which she calls “a version of Homer’s Iliad“. Oswald’s version takes you into each moment of death for 215 foot soldiers in the Trojan war, paired with imagery of children, fond memories and everyday moments that evoke the pain and suffering of more recent wars.

It’s no coincidence that the world premiere coincides with the centenary of World War I’s Armistice Day. Brink artistic director Chris Drummond takes the vision wider, saying the stage production recognises “all those who have made the ultimate sacrifice during conflict and war”.

Memorial’s storyteller is Helen Morse, one of Australia’s leading film and stage actors. She spends the entire 90-minute performance on stage, wending her way around and through the ebb and flow of our vast tide of humanity as she recounts those 215 biographies.

Be still, my beating heart: I will be on stage with Helen Morse – albeit briefly.

Each rehearsal, we dutifully line our drink bottles against the wall, slip off our shoes and don our headphones. “Hurry up and wait.” A military term that’s so appropriate as we position ourselves in readiness for associate director Benjamin Knapton to gently nudge clumps of us through each scene. We wait, and we watch, a chance to see what’s involved in creating a theatre event.

The production team scribbles notes and taps into a bank of laptops to later fine-tune our movements and tweak decisions about everything from lights to costumes, props to volume control. You’d think we were all NIDA material as we are told we are doing really well, we are impressive, we look terrific… 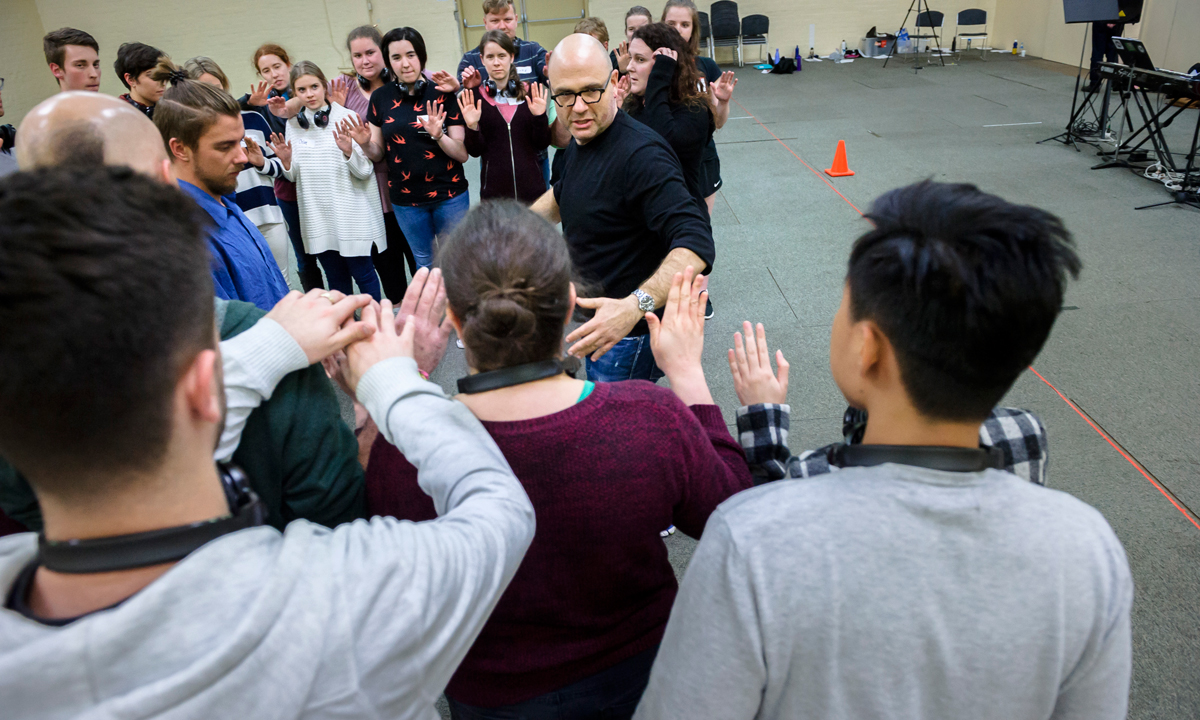 Chris grapples with reams of shiny, slippery black silk, trying various ideas to enrapture the audience on opening night; the musicians check their scores; and there’s a whirring of sewing machines in the adjoining room as the wardrobe folk create costumes for Helen, the musicians and dancers.

We, the supporting cast, will be wearing our own clothes and my outfit gets the tick of approval: it fits the colour palette and overall look of the production (I did have to remove the scarf, considered a bit blingy).

Memorial: The magnitude of loss

Rehearsals move from the Wayville studio to the Dunstan Playhouse and it’s getting serious: a tour of the dressing area, backstage and wings. Tiny earphones to adjust, stage directions to follow, doorways to leave unblocked. A lot of things not to bump into.

“Stand by.” Two words that get the pulse quickening. We follow instructions through the earphones: Go. Stop. Go. Turn.

A simple prompt to walk in a straight line across the stage can jiggle the nerves. Luckily, the crew members are so calm, it’s catching.

It’s all coming together. The musicians take their places and the singing soars. Helen takes centre-stage, the dancers appear from the wings, and we “move as a haunting and uplifting presence across the stage”.

Can we have one more rehearsal?

Memorial will be presented at the Dunstan Playhouse from March 1-6 as part of the Adelaide Festival program.