RED, a 15-minute surrealist film which will premiere at the Art Gallery of South Australia in late January as part of the 2017 Adelaide Festival program, is inspired by the sexual cannibalism of the Australian redback spider.

It’s a fascinating ritual, but also brutal: after or during sex, the male spider offers himself to his female as a post-coital meal, somersaulting into her mouth. If she’s not immediately hungry, she may bind his body and store it in her web as a snack for later.

Barton says she can’t remember when she first heard of the ritual – “but when I did, I thought, wow! That’s so insane and crazy and awesome all at once.

“For me it spoke about the poetics of female power, which is central to my oeuvre anyway, but this seemed like a more uncompromising, brutal manifestation of that.

“And to me the female redback spider is such an extraordinary creature – so monumental and fierce-looking.”

Keen to nurture the professional relationships she had made while working on The Nightingale and the Rose ­– a film project inspired by Oscar Wilde’s story – the two-time Archibald Prize winner says she decided to embark on a new film with the redback at the core of the narrative.

She started out by filming macro footage of mating spiders – under a house in Queensland, in the middle of a storm. And although she eventually captured what she wanted, including the female luring her mate along the web, mating with him and then binding him, it didn’t happen quickly.

“It hasn’t been filmed before so that was pretty exciting but quite stressful, too, because you can’t exactly cue your talent … we were there for five very long days.”

Barton says that after she won $50,000 in funding through the Australian Film, Television and Radio School, her ambitions grew for RED. She decided to develop the project with live actors (Blanchett and Alex Russell) and a dancer (Sydney Dance Company member Charmene Yap).

When it came to casting the “archetypal mother”, the artist says Blanchett – whom she had painted with her family for her 2011 Archibald Prize entry, Mother (a portrait of Cate) – was top of her list. Barton has previously said she screamed out loud when she heard the actress had accepted the role.

“She could not have been more perfect … I always aim for the best and it worked,” she tells InDaily.

“My understanding of Cate is that she really welcomes those creative opportunities … she welcomes challenges and stepping into unknown creative spaces.” 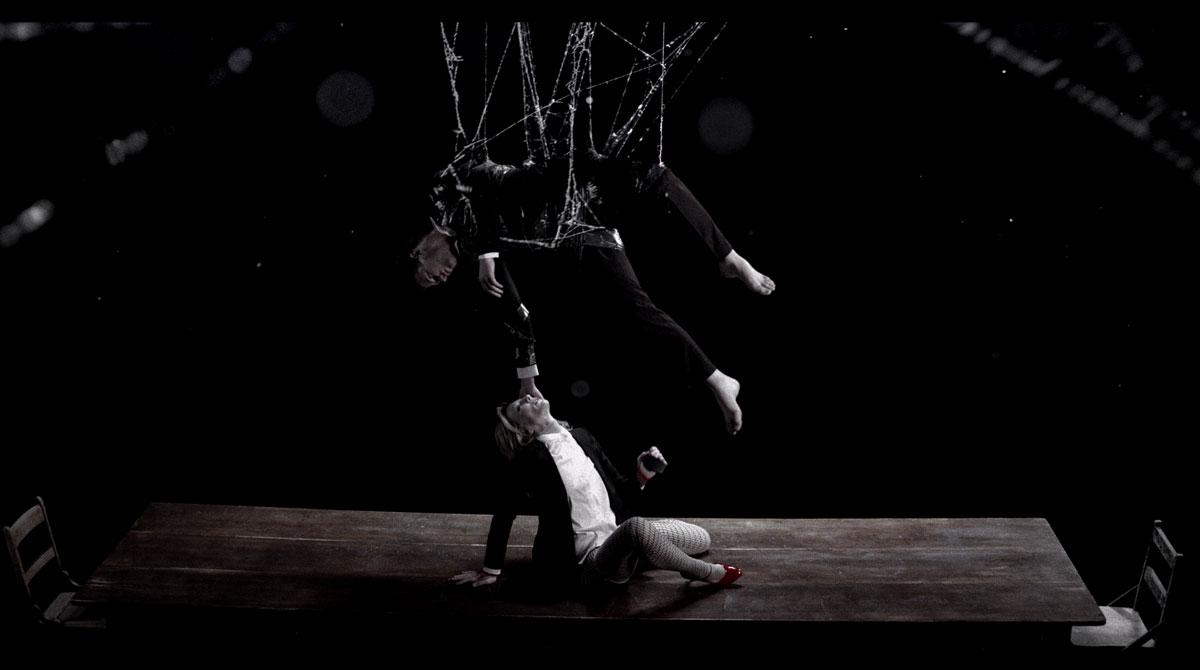 Barton describes Blanchett’s role as “fierce, strong, beautiful, predatory and poetic all at once”.

“Cate does this extraordinary performance where she cuts herself out of a suit, so it’s like she’s freeing herself from a type of skin and her female energy explodes into the universe.”

There is little dialogue in the film, which is largely visual and sonic. Its intense energy is driven by composer Tom Schutzinger’s soundtrack of beats, which reflects RED’s themes of life and death, sex, female power and fertility.

“It takes you on a wild, varied ride,” Barton says of the music.

“It really comes at you and slaps you around, and the film really needs that.”

Red will be at the Art Gallery of South Australia from January 26 until April 30, 2017.