There is a very good reason why Magda Szubanski’s memoir has been on the bestseller lists for months. It is a cracker.

It is not just because she is a very skilled writer, a deep thinker and a great searcher for the truth in all its contradictions and complexities. It is also because the book is not solely about her attempts to “find herself”.

Reckoning is about Szubanski’s father (it begins and ends with him), her mother and their relationship, her older brother and sister, her Polish relatives and their struggles in World War II, her migration to Australia from England, the struggles to “fit in”, her weight and her sexuality.

On the surface, she describes herself as a “short, fat, Irish, Scottish, Polish, Welsh, Swiss-Italian, lesbian with a father dying of cancer”. And she covers all of this in great detail.

Yet she is constantly besieged by readers who tell her how closely they related to her life story at an emotional level. Having been both surprised and delighted by this response, she has concluded that: “If we were all that unique, we couldn’t relate at all to each other.”

“We all have shared experiences and similar rights of passage,” Szubanski says. “That negotiation between what is uniquely you and the common-ground is part of your life’s journey.

This ability to communicate emotional truths is no doubt why she can create characters that the whole nation can relate to. Sharon Strzelecki in ABC-TV’s Kath and Kim is beloved not just because she is funny, but because she is sad. She tries so hard to fit in, to be helpful, to succeed. She is so needy. But when she fails, she bounces back.

Szubanski tells me: “I love Sharon. I feel very fortunate having Sharon in my life.”

So do we. There’s a bit of Sharon in all of us or in our friends and family.

“I have tried to strive for that kind of emotional authenticity with all of my characters,” Szubanski says.

“When I was doing Fast Forward, it used to drive me nuts that a lot of it was just comic tricks – jokes about jokes. They couldn’t earth it in some sort of emotional reality.”

The strongest strand in the memoir is that between her and her father, Zbigniew Szubanski. How is this for a first sentence: “If you had met my father you would never, not for an instant, have thought he was an assassin.”

Szubanski is emphatic that it wasn’t a matter of secrets.

”My father didn’t lie about his past; he chose to withhold the truth in order to protect his children, especially when they were young.”

And why was that?

“He didn’t want to dwell on it or keep emotionally inheriting that place like so many of those people who experienced that war and its trauma.

“Both my father and my mother were isolated by a form of trauma; there were parts of them that were inaccessible. I wanted to reach them, to connect emotionally to bridge that gap.”

Szubanski is a great fan of the writer Ernest Hemingway, who, despite his macho exterior, possessed in his writing an almost feminine sensitivity; he reminds her of her father. Zbigniew Szubanski acted in the way he did because he couldn’t stand what was happening to the Jews in Poland. She asks herself, and challenges her readers to ask themselves: What we would have done under those circumstances?

Her father was always non-judgmental about how others chose to act, regardless of whether they were Germans or Jews or Poles, never painting a black and white picture.

So how did Szubanski escape the usual minefield of family and national loyalties and sensibilities when writing about these issues?

She did her research, she visited the places, she talked to everyone and, most importantly, she listened closely to their stories. Their feedback was important to her, because hurting others was never her intention. She worked hard, chose her words carefully and consulted widely.

As Szubanski was writing the book, she took the pages home to her mum (her father had died by this time) and read the words to her. Picture them like Kath and Kim, side by side at the end of each episode, each sitting in their Jason recliners at the back of the house.

“The fridge and the pantry are in exactly the same place as the one in Kath and Kim’s house … oh, perhaps not the pantry; it’s on the other side, I think.” (She is obsessive about attention to detail.)

For almost two decades, Szubanski endured an invisible albatross slung round her neck. It was her anxiety about her sexuality.

“I reckon I started to twig I really liked girls from the time I was six. I liked boys, too, but I wanted to kiss girls.”

Eventually, one Sunday night when her parents were sitting in their recliners watching television, Magda, a very nervous Magda, confessed to them: “Let’s just say I’m not straight.”

Her mother asked her father: “Do you know about this?” He replied: “Course I bloody do! I’ve known for bloody years!” And then he winked at Magda.

After some silent rocking in their recliners, her father said: “That doesn’t change anything. You’re my daughter and I love you.”

Her mother added, in her familiar Scottish brogue: “Aye. Aye. We love you, hen.”

Like many others who first saw it on a news clip, I thought: What the hell did all that mean?

Here is how she explains it to me.

“I hate labels. You want the freedom to be whatever the f*** you want to be.

“That was what we were fighting for. That was why I took so long to come out … the point was, come out as what?

“So I finally came to the conclusion that I was not straight. If I met a man tomorrow and spent the rest of my life with him, I would still be ‘not straight’, because of all the experiences I have had thus far.”

Is she open to marrying a man?

“Yeah … but it’s very unlikely … but you never know. You have to be given that freedom.”

What about the impact on your career?

“I had dreamt bigger than that. I wanted to connect with a wider audience than that.

“I still know young gay people very proud of their identity who can feel trapped. They want to do what is politically and morally right … but they don’t want to be labelled and typecast.

“It’s very difficult because it’s your livelihood, your vocation, your calling. You can’t restrict your creativity just to your sexuality.”

Reckoning is a great model for those who fancy writing a memoir. It’s brave, it’s gutsy, it’s thoughtful, it’s complicated. And above all it’s authentic. Just like Magda Szubanski. 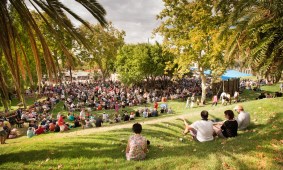