Featuring a cast of nine dancers, the show is a fusion of chaotic dance, spoken word, sound effects, music and a hint of acrobatics.

In the opening moments, a sole male dancer struggles to open a package which has fallen from the roof, tearing off layer after layer in frustration until he discovers the contents inside. Then a female dancer describes a typical day in her life, accompanied by three others who manipulate their bodies to form everyday objects including a bicycle and a bed.

As the show progresses, the dancers bring out a range of seemingly ordinary household objects, and over the course of 70 minutes the stage of the Space Theatre becomes cluttered with books, ironing boards, tables and sofas – all of which are cleverly incorporated into the choreography.

The dance technique and imaginative use of props are impressive, even if the meaning of some routines is difficult to grasp. Dancers climb over and under tables, build and destroy large piles of books, and swing ironing boards like weapons in a series of quirky routines which explore consumerism. There are times when the dance becomes quite aggressive, with books being hurled across the stage and lounge chairs knocked over as the cast systematically destroys and rebuilds the environment. 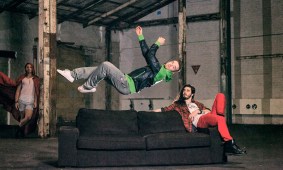 One of the dancers displays impressive balancing skills as he climbs up and over a sofa as it is tipped and moved across stage, while another cleverly manipulates her body to reflect the movements of an ironing board.

Each routine is performed to an eclectic soundtrack which combines music with familiar sound effects such as dripping water and a fierce wind to create the feeling of a constantly changing environment. There is a recurring blue colour theme in costumes, props and even body paint which glows eerily in the darkness of the theatre.

As the show draws to a close, a closing monologue raises important questions about mankind’s place within the physical world.

Directed and choreographed by Australian Dance Theatre’s artistic director Garry Stewart, Habitus is the first in a series of new projects exploring nature. A second work, The Beginning of Nature, will premiere at WOMADelaide.

Habitus is playing at Space Theatre until March 5.