Romeo Castellucci’s Societas Raffaello Sanzio is described by Adelaide Festival artistic director David Sefton as one of the most important theatre companies in the world today, presenting work that is “stunning, challenging and thought-provoking”.

The work it is bringing to the 2016 Festival, Go Down, Moses, reflects on the Jewish Exodus from a female perspective and will feature music from American electro-acoustic composer Scott Gibbons. It is sure to be provocative and comes with an 18+ rating, with warnings of sexual themes, adult themes and nudity.

Castellucci – who was last at the Adelaide Festival in 2000 with Giulio Cesare, a controversial take on Shakespeare’s tragedy – explains more in this email interview with InDaily.

What is the significance of the title of your play?

Go down, Moses is a book of stories by William Faulkner and also the title of a spiritual, from the times when the African-Americans were slaves and dreamt of freedom, like a second exodus. Slavery is a word that comes up more than once in the Exodus. In the performance, the woman, Moses’s mother, speaks of an invisible slavery into which we have all fallen, as beings who have been exiled from themselves and abandoned by God.

Go Down, Moses is inspired by events in the Book of Exodus, but presents a female perspective – why did you decide to take this approach?

The figure of the Prophet was at the origin of this work: Moses is the sole man to have seen the image of God, and thus be compelled to take on the role of prophet and guide his own people. Since then, the image of God has been forbidden to mankind, denied. The figure of Moses hence raises questions concerning the sense of the image, which is not a simple illustration but a hindrance, a danger.

During the process of rehearsal, a different perspective emerged, led by this same idea: I concentrated my attention on the mother, she who entrusted Moses to the waters of the Nile, and on her premonition of the great destiny that awaited her newborn son.

The perspective thus shifted, going within the mind of this woman, in a series of tableaux that proceed from the birth of the child to its abandonment, followed by a final apparition. The latter takes place in a cavern, which is perhaps a mental space, a projection of the origin of mankind: according to palaeontology, it was women who invented art, representing images on stone, and creating along with them narration, and the mystery of birth and death.

We are told that the work presents the familiar Biblical passage in an “unfamiliar and provocative new context” – can you explain that context for us?

The Bible is a cornerstone of Western culture, a book with an extraordinary formal potency. I’m not referring to faith, but to the great narration that is contained in it. Here, the Exodus is crucial. This is where the essence of our own time is found, with key words such as wandering aimlessly, solitude, the ban on images, the desert, and above all the concept itself of an exodus, understood as a sort of mental desert, which comes up again in our own times even though we live in crowded cities, submerged by information and empty images.

To what extent do you believe the themes of the Exodus remain relevant in today’s conflict-torn world?

There is a whole vocabulary in the Book of Exodus: the Burning bush, the Golden calf, Slavery, the Exodus understood as motion and flight, the Pharaoh, the Law, the problem of Images. Each of these words finds an exact resonance in our own times – perhaps most clearly in the case of the Golden calf – and each of us can give them the meanings we find most appropriate.

My work consists in showing combinations of elements, that proceed by association and can create subordinates in the mind of each spectator. It is as though we were faced with constellations that are never named, entirely belonging, rather, to the intimate epiphany of the viewer. But here, it is not a question of evoking dreams or surrealism. That which is at work, in these images, is something cold or calculating, as was the enigma for the Greeks. A sort of logical knot. 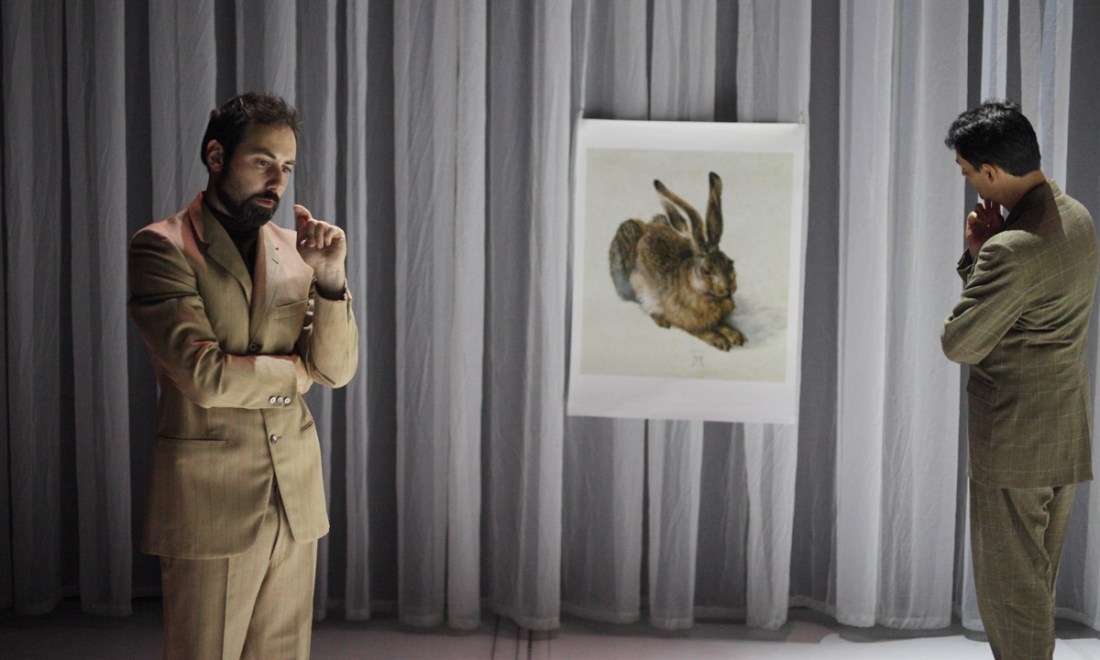 Why do you prefer to let imagery and symbolism drive your productions, rather than traditional narrative?

I myself do use narrative forms. But not the literary type, and this is not the aim of my work. What’s more, I could say the same thing about images or symbols, which do not interest me as such. What does highly interest me is theatre itself, theatre in itself, and the powerful tautology that is inherent in it.

Theatre is the only possible place in which the spectator sees himself in the act of looking. We could sum this up by saying that the art of theatre is a technique of contact with the spectator.

You were last at the Adelaide Festival in 2000 with the controversial Giulio Cesare, and Go Down, Moses looks like it will also be a challenging work. What drives your desire to push theatrical boundaries?

Creating theatrical performances, these days, requires one to continually elaborate on existential material; one can no longer turn to the condescending channels of textual repetition, recycling that which is already widely known. The thing that leads me to continually put the limits of this art is the fact that I live in this era, and not in a bookshop.

Go Down, Moses will be presented in the Dunstan Playhouse, Adelaide Festival Centre, from February 25-27 as part of the Adelaide Festival. It is recommended for ages 18+ and is performed in Italian with English surtitles.