Wild Dog, produced by Country Arts SA and Insite Arts, has been a passion project for artistic director Jacob Boehme for around a decade. The Kaurna/Narungga multi-disciplinary theatre-maker and choreographer has been working with First Nations peoples across Australia and in Taiwan since 2019 to bring the dingo songline to life, and ­he’s excited to see their efforts now come to fruition in a multi-faceted family-friendly exhibition at Tandanya National Aboriginal Cultural Institute.

“There’s a lot of colour and movement,” he says, speaking to InReview during the final stages of the installation this week.

“You’ll see film, you’ll see animation, puppetry, dance, sculpture. There’s plenty of opportunity for people to participate and contribute, and a whole bunch of information – simple facts around the cultural importance of the dingo, its behaviours, and the environmental role the dingo plays on our continent… the dingo is important in maintaining ecological balance.”

While it was previously thought that the dingo arrived on the continent around 3000 to 5000 years ago via seafaring traders from Asia, Boehme says the latest research suggests it may have been here much longer.

It is an important cultural symbol for First Nations peoples, featuring strongly in Dreaming stories, songlines and ceremonies. The Wild Dog project has involved extensive research, consultation and collaboration, with participation from artists and communities from Kaurna and Narungga Country in South Australia, and Lardil and Kaiadilt Country in Queensland.

Boehme also worked with the Bunun Indigenous people of Taiwan and discovered their traditional story of the wild dog begins in the same way as the Narungga one.

Showing as part of Wild Dog at Tandanya is a contemporary dance film directed by Boehme titled Wild Dog Dreaming, which was adapted from several Narungga ancestral stories. It tells of a cheeky boy who is banned from his tribe’s camp area after they get tired of him telling lies; he ends up being turned into a Gadli (dingo) when the wind casts a spell on him.

Wild Dog Dreaming was filmed on Narungga Country on the Yorke Peninsula, and features dancers and performers from the Narungga Nation and other First Nations. 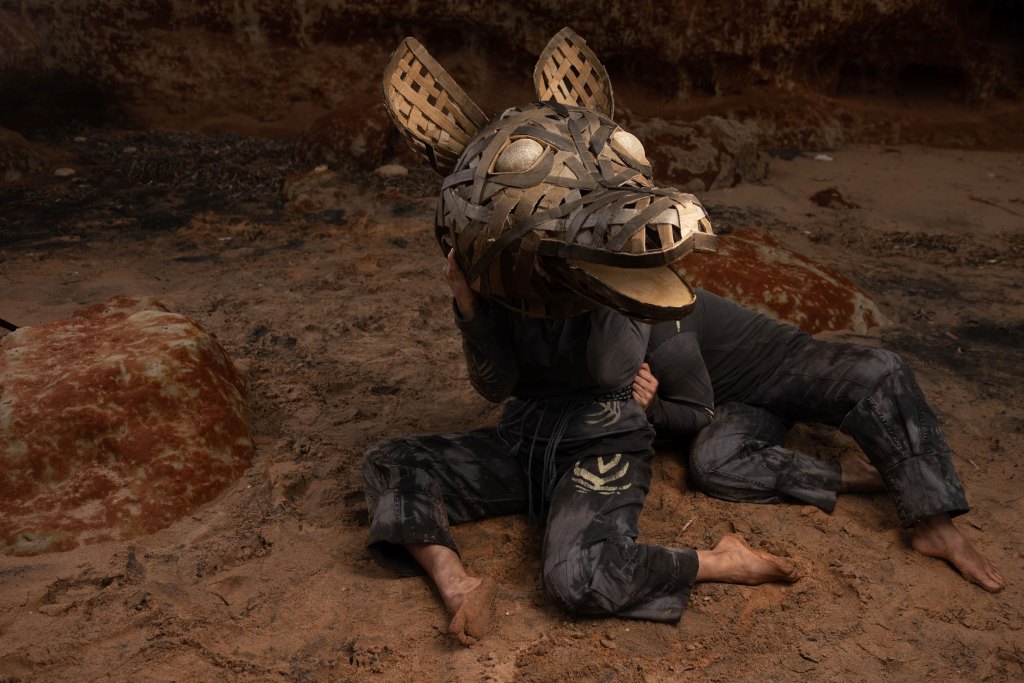 Another element of the exhibition is a Kaurna installation, Six Dog Night, which was created in consultation with Kaurna elders Uncle Lewis O’Brien and Aunty Lynette Crocker and is based on familial stories about the Kadli (dingo). The title alludes to the fact that the Kaurna people traditionally slept alongside dingos for warmth.

“If it was a six dog night, you knew it was bloody cold,” laughs Boehme, adding that designer Kathryn Sproul used donated blankets to create soft sculptures of dingos for the installation.

“You come into this beautifully lit space, you lie down with dingos and you look up at an animation of the Kaurna night sky and you listen to stories told by Uncle Lewis and Aunty Lynette.”

Among the visual arts on display is a series of painted plates by Lardil artist Roxanne Thomas that expresses the journey the Ngarembee (dingo) takes from the south to Mornington Island in Far North Queensland. Boehme says the paintings depict a dingo love story. In an associated participatory project, visitors to Wild Dog are invited to write an anonymous love letter to those they love and attach it to a sculpture. 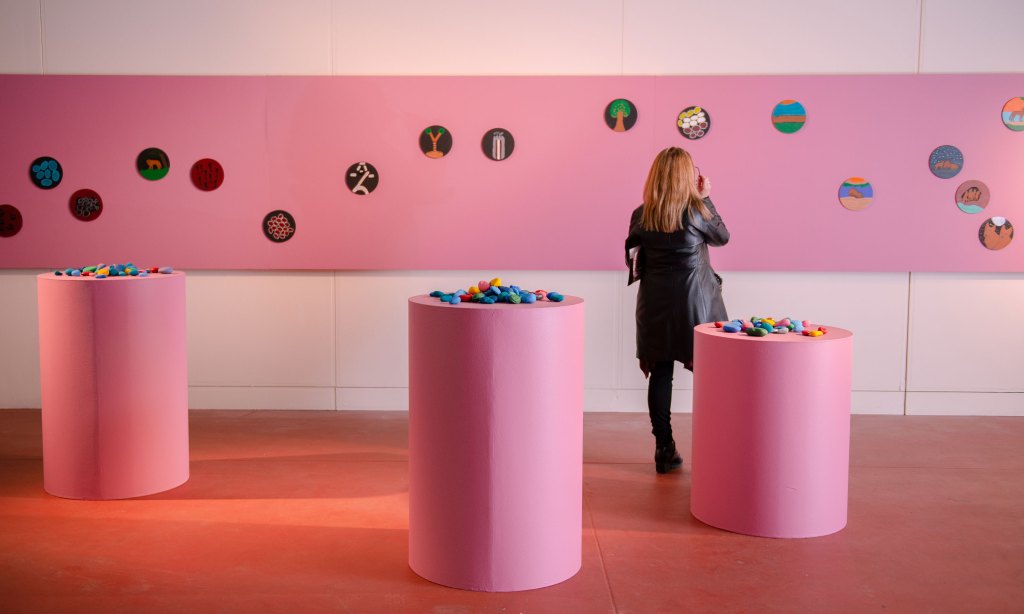 There are also 25 paintings by 86-year-old Kaiadilt artist Netta Loogatha, who also lives on Mornington Island but was born on Bentinck Island at a place called Bilmee, known as Dog Story Place.

“All her paintings are based around Bilmee,” Boehme says. “They’re stunning. So rich and colourful… they’re almost psychedelic.”

In addition to being a cultural maintenance and revival project, Boehme hopes Wild Dog will help change negative attitudes towards dingos in Australia, where they are regarded by some as a pest.

“That goes back to the 1800s, when industrial farming and agriculture really started to take over in Australia. Agriculture and governments started to formally demonise the dingo – we started to hear that the dingo was a pest, that it was the devil, and it was all to protect farming interests.”

The truth, he says, is that they are intelligent and shy animals who form tight family units. Some farmers today even use dingoes to protect their stock. 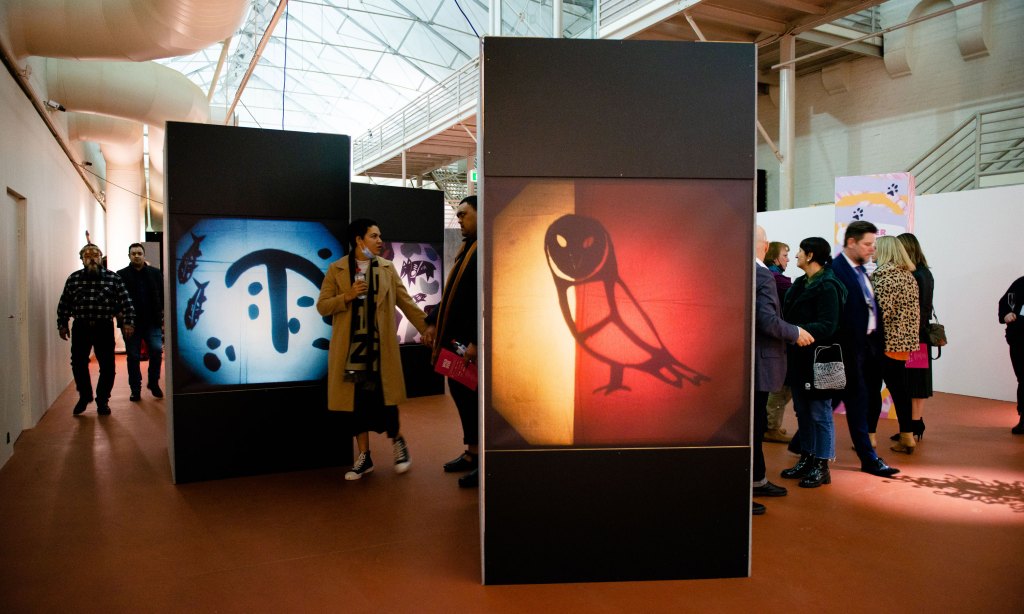 Guests at the opening of Wild Dog at Tandanya. Photo: Nat Rogers

A schools resource kit has been created as part of the Wild Dog project, and running alongside the exhibition at Tandanya is a free public program of talks which will enable people to learn more about the artists involved and the work being done to defend and advocate for dingoes.

“This project is about preserving our sacred stories and dreaming and, most importantly, bringing attention to the plight of one of our most persecuted and ecologically important native animals – the dingo,” Boehme says.

“Without his existence, these stories, lore and dreaming are lost.”

Wild Dog is being presented by Tarnanthi at Tandanya National Aboriginal Cultural Institute as part of Illuminate Adelaide. It runs from July 15 until August 20, with details of the free public program of talks available here.