Flinders University’s Drama Centre is presenting two public events in the coming weeks that it says highlight the positive outcomes of a review which sparked controversy in late 2020.

A media release heralding the “bold revival” of drama at the university says graduating students will present a new production titled Coming of Age in Australia which comprises an anthology of landmark coming-of-age stories in Australian theatre, including scenes from Ray Lawler’s 1955 play The Summer of The Seventeenth Doll and works by David Williamson and Dorothy Hewett.

The performance – at the Bedford Park campus from July 26-29 ­– is directed by current teaching artist-in-residence Wayne Harrison, a former artistic director of Sydney Theatre Company. Harrison will also present the Biennial Wal Cherry Lecture at Flinders @ Victoria Square on August 2, discussing “change and renewal within the performing arts sector”.

While the review of the Flinders Drama Centre and the announcement of a pause on the intake of new students caused concern among students and others in the arts sector at the end of 2020 – and led to a change.org petition to “Save Flinders Drama” ­– the university says it revised its curriculum “to respond to the changing needs of the sector in light of emerging trends, technologies and platforms”.

It appointed four new permanent academic staff described as actor-training specialists (including Christopher Hurrell, Renato Musolino and Tiffany Lyndall-Knight), with a new cohort of acting and directing students beginning in 2022. Chris Hay, from the University of Queensland, is also due to start as a new teaching-and-research Professor of Drama in October.

Details for the Biennial Wal Cherry Lecture can be found here, and tickets for Coming of Age in Australia are available here.

New director at the Con 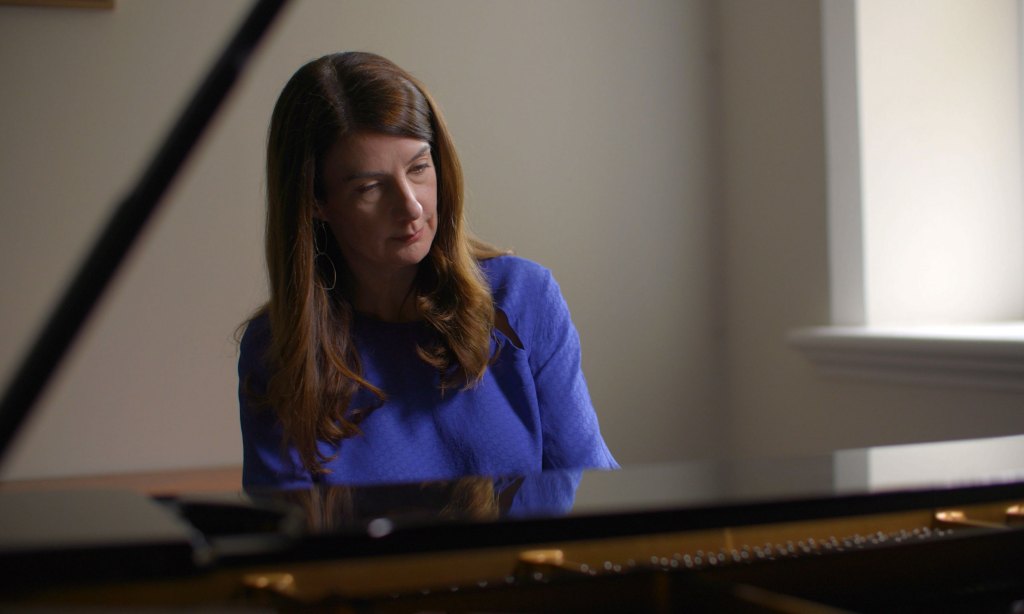 Pianist, writer and festival director Anna Goldsworthy has been appointed director of the Elder Conservatorium of Music – the first woman to hold the role since the school was established at the University of Adelaide in 1883.

Professor Goldsworthy, author of the memoir Piano Lessons, is artistic director of the Coriole Music Festival and the Music & Mountains Festival in Queenstown, New Zealand, and a former director of the JM Coetzee Centre for Creative Practice. She is a founding member of the chamber ensemble Seraphim Trio, which in 2019 won an ARIA award for its collaboration with Paul Kelly titled Thirteen Ways to Look at Birds.

She described the Elder Conservatorium as “a jewel in the University of Adelaide’s crown”. “It has been a part of my life since childhood, and I am passionately committed to seeing it flourish. I am very excited about stepping into this leadership position as a woman, and hope to be the first of many.”

She added: “We live at a time of exponential change, in which the connectivity and sense of humanity offered by music has never been more important. I look forward to maintaining the Elder Conservatorium’s reputation for excellence, while engaging with all parts of the larger musical ecology: the performers and teachers of the future, community groups, performing arts institutions, and a broadening audience.”

The 2023 Adelaide Fringe poster competition has opened, with artists, illustrators and designers invited to create a design that captures the spirit of the festival and what it means to them.

“Fringe is always such a magical time of year and in the last couple of years it has really felt like the clouds have cleared to reveal magical and festive sun rays for us all to bathe in over the Fringe month,” says Fringe CEO and artistic director Heather Croall. “It would be wonderful to see a poster that celebrates that sense of ‘sunshine after the rain’ that Fringe creates.” 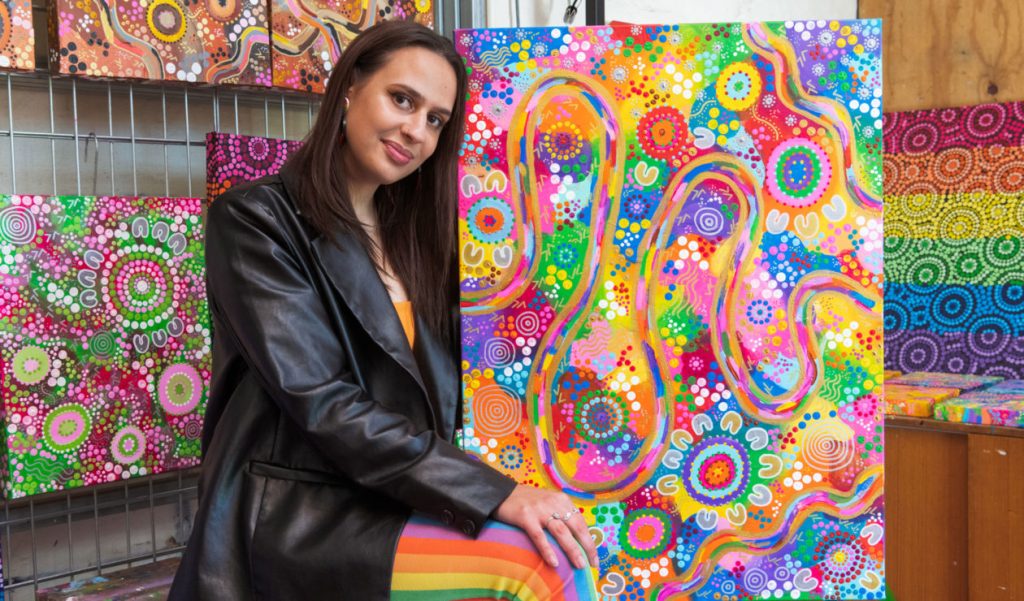 The competition is open to everyone from hobbyists to professional artists (details here). The winning design will become the “emblematic image” of the 2023 Fringe, with the artist receiving $6000 in prize money and free registration for an exhibition at Fringe. The deadline for entries is August 8, with the winner to be announced in October.

Arabana and Kokatha artist Mali Isabel, who won the 2022 poster competition with her vivid design A Whimsical World, recently held her debut solo exhibition at Tandanya. 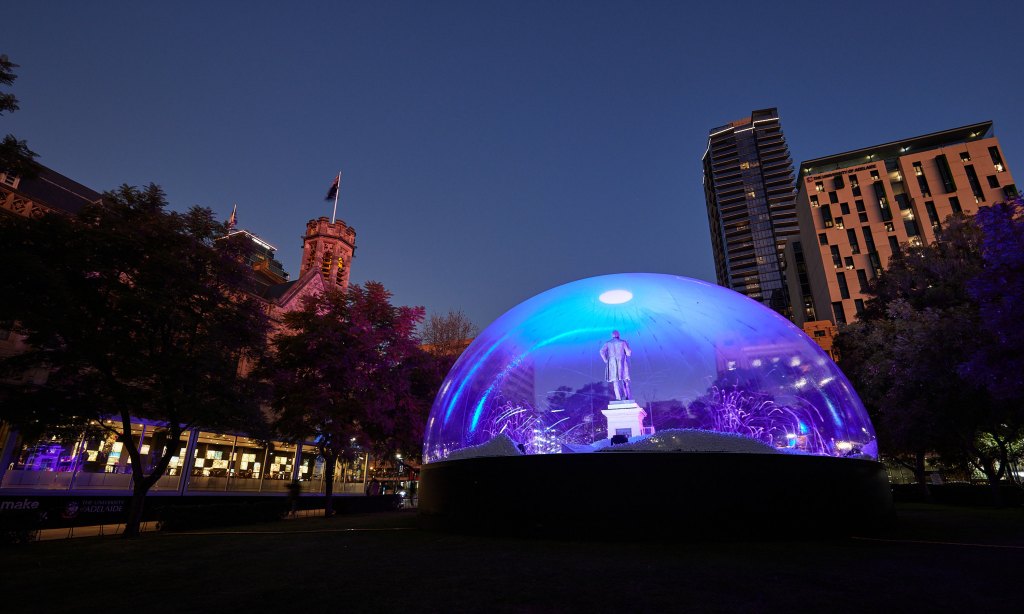 A map showing the location of the more than 40 installations, projections and other City Lights artworks bringing a glow to the CBD can now be downloaded (here) from the Illuminate Adelaide website.

The works are being presented in laneways, open spaces and on landmark buildings in three precincts (north, east and west) from 6pm-11pm nightly until July 31.

They include a playground of giant glowing seesaws on the Adelaide Festival Plaza, a chandelier harp fitted with laser sensors at the Queens Theatre, and a larger-than-life snow globe that engulfs the Sir Thomas Elder statue at the University of Adelaide’s North Terrace Campus.

InReview recently spoke to visual artist Vincent Namatjira, whose new animated artwork Going Out Bush is projected on the front of the Art Gallery of South Australia during City Lights. 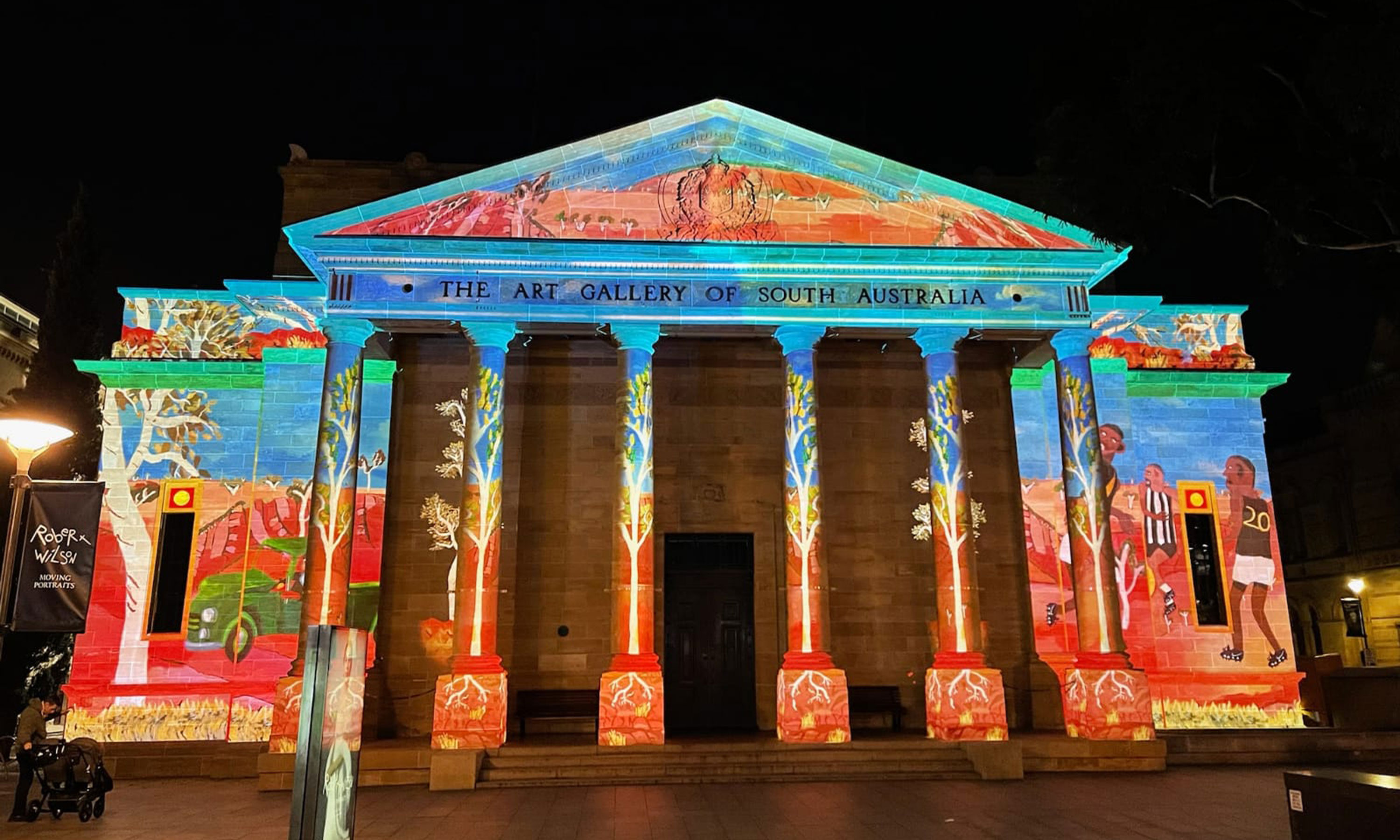