Designed for screen productions working in South Australia, the First Nations Cultural Protocols digital handbook outlines cultural protocols including Welcome to and Acknowledgement of Country, offers advice on how to identify whose country you’re filming on and obtaining filming permits, and includes an overview of other considerations for situations involving First Nations SA communities and content.

SAFC First Nations screen strategy executive Pauline Clague, who was involved in developing the handbook as part of the corporation’s First Nations Screen Strategy, says it will guide the sector in “embedding cultural consultation and liaison in all screen production. This document formalises the work we already do through the agency, and will prove an invaluable resource for interstate and international productions coming to South Australia.”

The guide can be downloaded here. 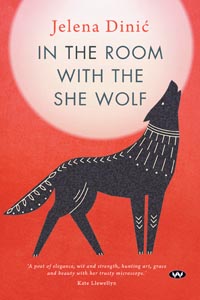 Adelaide-based writer Jelena Dinić’s poetry collection In the Room with the She Wolf, published by Wakefield Press, has won the Association for the Study of Australian Literature’s Mary Gilmore Award.

The association, which presents the award annually for the best first book of poetry published in the previous calendar year, selected In the Room with the She Wolf from a shortlist of six books, saying: “This compelling, vivid and richly evocative book is certainly a remarkable debut.”

Dinić, who migrated to Australia in the early 1990s from the war-torn former Yugoslavia, previously won the 2019 Adelaide Festival Unpublished Manuscript Prize for her collection, which was reviewed here earlier this year by InReview contributor Rachael Mead.

In a video clip recorded by ASAL after In the Room with the She Wolf was shortlisted for the Mary Gilmore Award, Dinić said the poems in the collection are about looking for answers: “They are about the migrant journey. Through them I’m trying to find again things I left behind. These poems were conceived at the edge of two worlds, two cultural traditions, and two languages. In the process I fell in love with the endless possibilities of what words can do.”

Rundle Mall shoppers may have noticed a colourful new installation pop up this week as part of the month-long Umbrella Festival.

Located at the King William Street end of the mall, the installation features cut-outs of possum artwork by local artist Emily Savage and graphics by Dave Court. Look a little closer, and you’ll see it incorporates an interactive augmented-reality element. 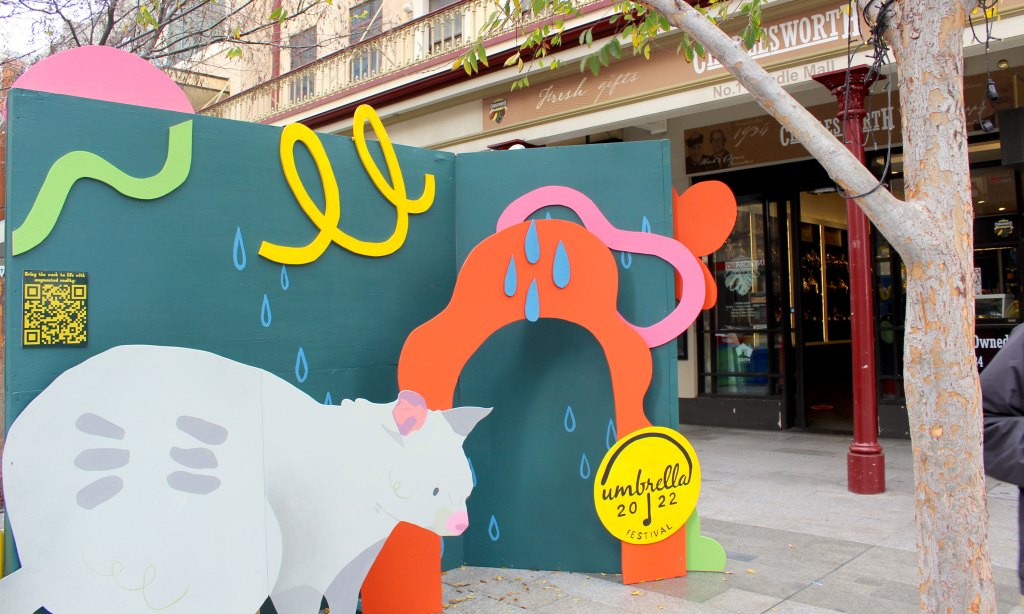 Umbrella Festival, presented by Music SA, features more than 175 live music gigs across the state. It also sees the return of the Adelaide Arcade Unplugged series of acoustic music performances in the CBD arcade every Thursday-Saturday lunchtime during the festival.

Also kicking off this weekend is the Adelaide Festival Centre’s Guitar Festival, with a line-up of free gigs in regional towns as part of the On the Road program, plus ticketed shows, a guitar expo and more.

Highlights of the Guitar Festival program include Spinal Tap’s Derek Smalls – aka Harry Shearer – going head to head with You Am I’s Majesty of Tap (Shearer and Tim Rogers will also take part in a Q&A at a screening of This is Spinal Tap at the Mercury Cinema on July 22), and shows featuring The Black Sorrows’ Joe Camilleri (celebrating his 50th studio album), ARIA Award and multi Golden Guitar winner Fanny Lumsden (in a concert with special guest Jimmybay), and Spanish flamenco star José María Gallardo del Rey. See the full program here.

Winkler’s novel Grimmish, about an Italian-American boxer named Joe Grimm who visited Australia in 1909, was the first self-published entry to make the Miles Franklin shortlist in the prize’s 65-year history. He will share his top tips for self-publishing in a Writers SA session on August 1.

Other highlights of the winter program include a free, in-person workshop in which comics journalist and cartoonist Sam Wallman will guide participants in how to create a short autobiographical comic, and a six-week workshop series with literary agent Alex Adsett on agents, pitching and contracts.