The six wives of King Henry VIII are here to tell of their misery and vie for the crown they really want – the queen of the sob story.

Each wife is given a solo to prove their worthiness of the title, and there are certainly some strong contenders.

With divorce, beheading, miscarriage and accusations of treason and adultery between them, the ladies put their cases forward, with choreography and vocals to really make their stories shine.

When the first number finishes, the kind of rapturous applause usually reserved for pop groups in big stadiums breaks out.

These wives – Catherine of Aragon, Anne Boleyn, Jane Seymour, Anna of Cleves, Katherine Howard and Catherine Parr – are reminiscent of the likes of Adele, Lily Allen and Ariana Grande.

With six soloists, you’d expect a weakest link, but there isn’t one. “Heart of Stone”, by Loren Hunter’s Jane Seymour, is quietly emotional, breaking into a big, powerful ballad. 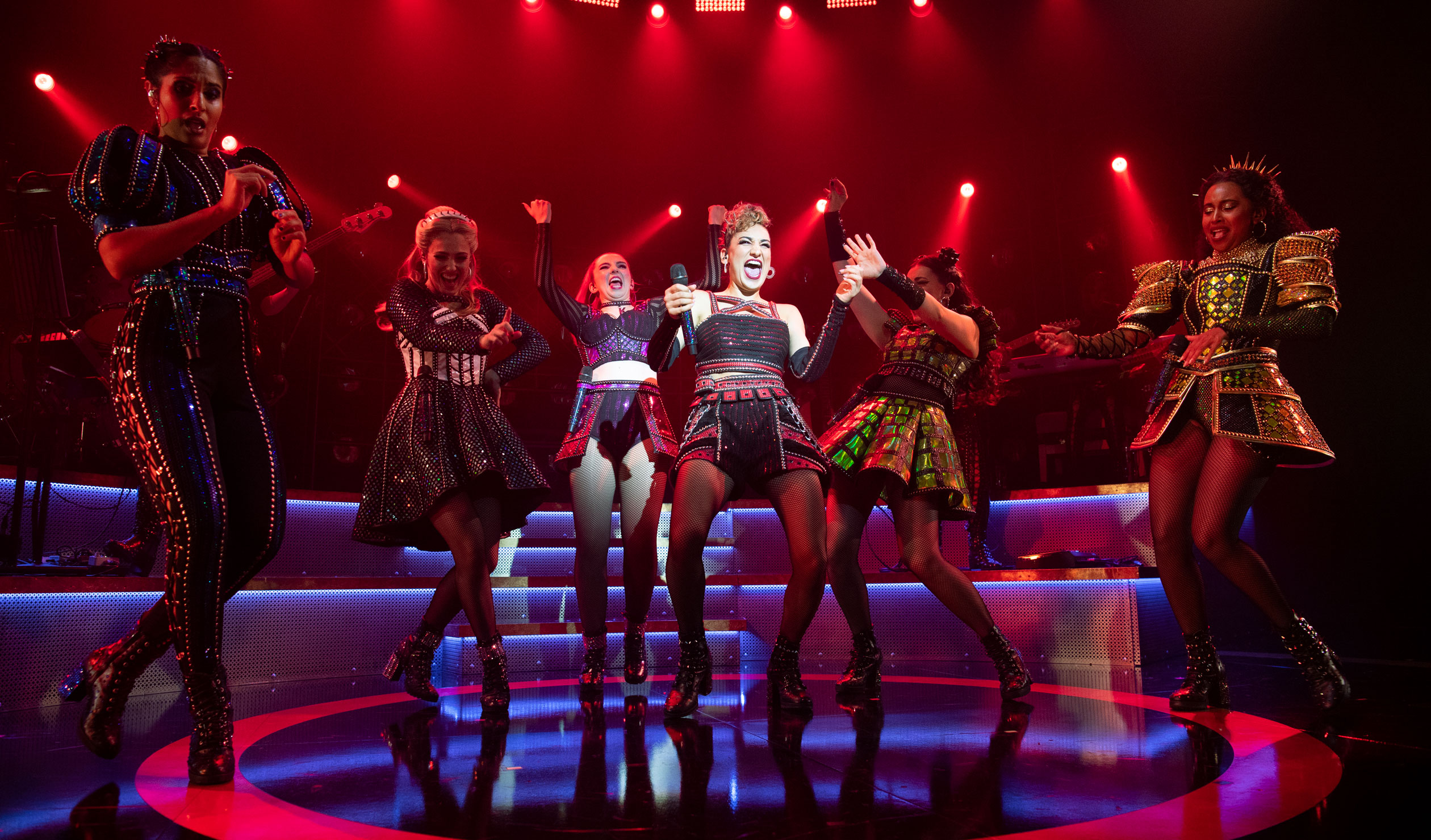 The cast of Six the Musical, with the spotlight on Kiana Daniele, who plays the independent Anne of Cleves. Photo: James D Morgan/Getty Images

The upbeat “Haus of Holbein”, inspired by the misleading portrait of Anna of Cleves painted by artist Hans Holbein, takes the show into different territory – comedic techno has never been done so well.

Costume design is by Gabriella Slade, who created the costumes for the Spice Girls’ 2019 Spice World tour. They’re a little bit Tudor-style and a whole lot Lady Gaga, with fishnets, sequins and built-in microphone holders – a must with the energetic choreography.

The band is on stage with the queens the whole time and seamlessly move from pop and R ‘n’ B to techno and power ballads.

The songbook plays like the perfect girl group album and, even though the show is mostly made up of solos, the support of backing vocals in each song ties the group together. Each performer’s uniqueness comes alive with their own song, but their strength as a group is unbeatable.

The changing of atmosphere from quiet, thoughtful moments to all-out dance party is supported by the set, with LED lighting that is beautifully subdued and rave-ready.

By curtain’s close, the woeful tales have transformed into the women reclaiming their stories and power – and what a way to get there.

Paired with perfectly timed and deliciously dark comedy, they’re the kind of songs you’ll have in your head the next day and want to turn up in the car on the way home.

Six the Musical is playing at Her Majesty’s Theatre until June 12.