It’s a quiet night at the Torrens Parade Ground. Inside the Drill Hall, up the stairs and into a back room, laughter breaks the stillness as a group of people go through a series of theatre warm-ups.

It might be difficult to see the threads that link the men and women of varying ages and backgrounds, but there is a commonality in each of their lives. Members of the Theatre for Change drama group have all served in the armed services, with participants who have been in the Australian Army, the RAAF, SAPOL, or a mixture.

Surrounded by displays of military paraphernalia, they are using the arts to gently explore their feelings and creativity. It’s not easy to perform improvisation in front of a room full of strangers, but their shared background creates a sense of camaraderie among the group’s members.

One of the participants, a former police officer who left the force after 12 years with post-traumatic stress, says she had done some theatre and acting before, so found the idea of Theatre for Change intriguing.

“Because I knew the people participating were from very similar backgrounds and had similar stories, there’s an instant trust there and I was able to be in a vulnerable situation,” she says.

“We know what it is like to work through trauma or experience things that the general public don’t see or experience.”

She came to the group through Military and Emergency Services Health Australia (MESHA, formerly The Road Home). MESHA is part of The Hospital Research Foundation Group, an SA charity supporting the health and wellbeing of military members, emergency services personnel and their families.

Theatre for Change gives the participants licence to explore feelings as they discover how to play scenarios in varied ways. Run by the State Theatre Company of SA, it is led by contemporary theatre-makers Paulo Castro and Jo Stone.

“Frontline and military workers are trained to operate on a high-functioning level where they can shut down parts of their emotions or their personal needs, to serve a bigger picture,” Stone says.

She believes that looking at scenes and dialogue, and analysing behaviour in characters, can help participants understand the way we think and feel.

“Suppressing emotion is a tactic often used to navigate and survive trauma. But being able to identify and normalise it in a completely different context is sometimes a big thing for some participants and can be therapeutic.”

Stone and Castro, whose company Stone/Castro has performed around the world, have both worked with people from a wide range of backgrounds.

Theatre is about exploring and reflecting the human condition

Castro, originally from Portugal, performed in radically political pieces throughout the 1990s in Europe and was involved in a staging of Samuel Beckett’s Waiting for Godot – a piece the Theatre for Change participants are working on scenes from.

Through the Portuguese National Theatre (Sao Joao-Porto), Castro directed Lars Noren’s Category 3.1 with patients in a psychiatric hospital, and  Dostoevsky’s Notes from the Underground with high-security prisoners.

“I’m interested in texts that talk about exclusion, so it makes sense to work with people that are excluded from society,” he says.

He and Stone have both worked for various disability arts companies, mental health projects and with community groups. They facilitated a workshop in Portugal for people re-integrating socially after a drug rehabilitation program. 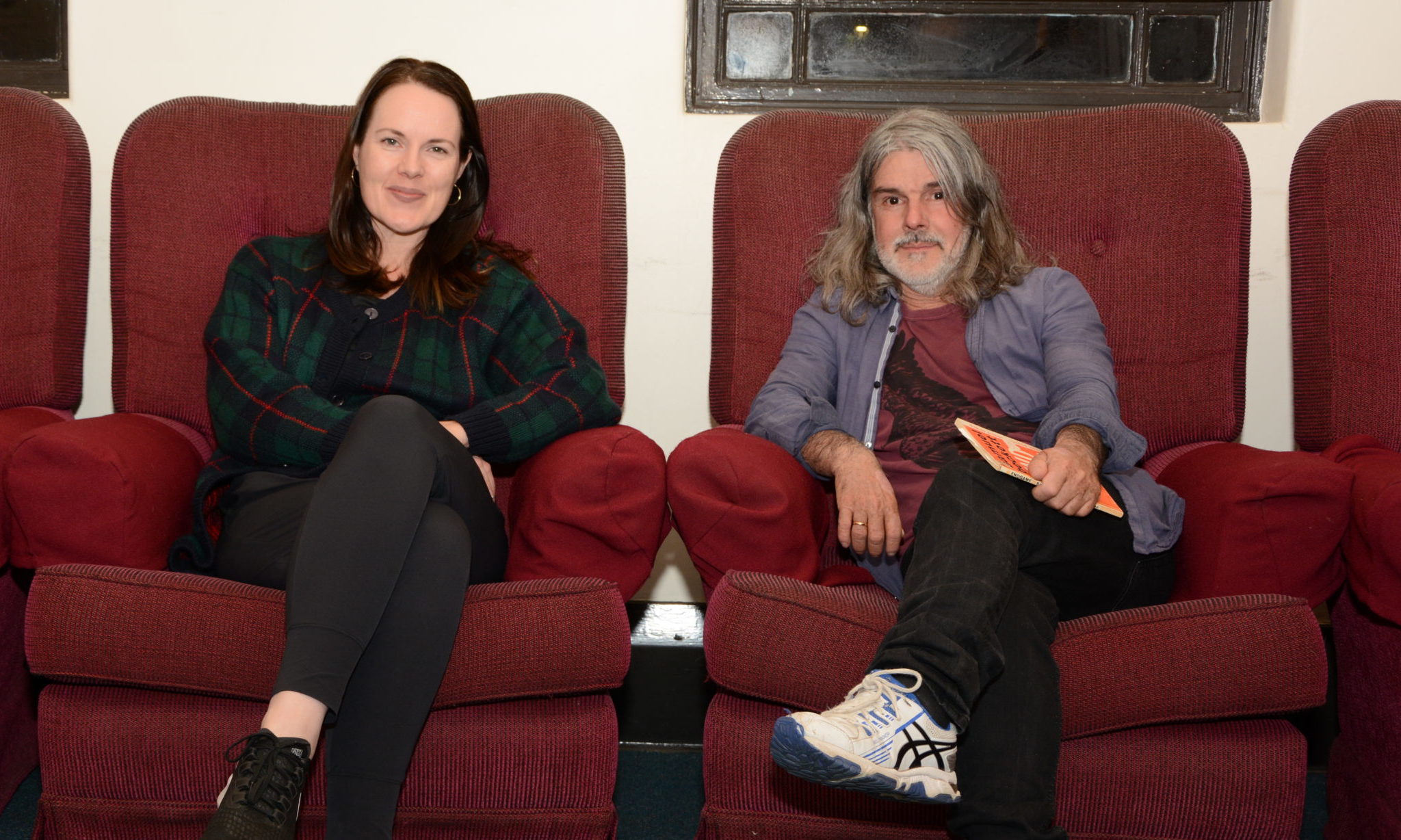 “I find this really important work,” Stone says. “It’s refreshing to unpack theatre through the eyes of people who have had diverse life experiences and have interesting thought processes.

“Theatre is about exploring and reflecting the human condition. More than most people, participants in these groups have lived experiences that meet this work on a deep level.”

The theatre-makers have no training in therapy, and that’s not their aim, but they want to provide a place of safety and quietness for the participants to feel free to be wherever they are at.

“People have said they feel safe, which is really beautiful. For this group, being safe is of high priority and being able to create that, I feel really honoured,” Stone says.

State Theatre executive director Julian Hobba says it started the group, which is funded by the Office for Ageing Well, to help returned veterans make meaningful connections and tap into their innermost selves.

“We hope the workshops can help give participants purpose, focus and an opportunity to use their innate organisational skills to achieve their goals and desires,” Hobba says.

“The program’s also been an opportunity to safely explore and express their experiences. Attending regular group workshops has really helped break down the social and emotional isolation experienced by veterans.’’

Without questions ever being asked, personal experiences are often mentioned subtly and the group is sympathetic. “We’re free to explore experiences that we’ve had and we’ve certainly gone through times when we’ve listened to someone who isn’t quite feeling well that day,” one participant says.

“We’ve been able to either just observe and listen from afar, or we’ve had the freedom to talk about what’s happening.

“There have been times where each of us is very much up and down. If we’re not having the best week, we know that we can still come here. It’s a safe place.”

There are no prerequisites for experience or even talent in the group, but both Stone and Castro agree there has been plenty of the latter.

One participant, Adam Bullmore, has been pursuing a career in the arts through his military channels. Bullmore joined the Defence Force in 2007 and has been on a couple of overseas deployments. He says he loves the job, but a traumatic leg injury put pause on much of the physical aspect.

He’s since done the ADF Arts for Recovery, Resilience, Teamwork and Skills (ARRTS) Program and a drama class for veterans through UniSA. In June, he appeared in horror comedy feature film Stuffings.

“This is all designed to be able to use different coping mechanisms; an outlet for emotions,” he says.

When Bullmore takes his place, ready to perform, his natural affinity with the stage shines.

Retreating out of the spotlight for a moment, he chats to one of his fellow participants, who has been in uniformed service for 36 years, originally joining the Australian Army, then SAPOL and then the Border Force.

They talk about the importance of looking after yourself mentally after years of service, although they admit they’re still trying to figure out what that looks like.

The former officer speaking with Bullmore says that in the lead-up to him joining Theatre for Change, six people he’d worked with had taken their own lives – five with their service weapon – and in the week before the course started, the tally reached seven.

“The impacts of the kind of work people here [in the group] do build up over a period of time,” he says.

“I’ve likened it to parking your car near a steel works. If you work there for years, eventually the paint on your car will corrode. Continually working in this environment has a long-term effect on people. Sometimes it shows up quickly. Sometimes it takes longer. But eventually, it will.

“Then the next job could be a fatal crash and the next could be a sudden infant death. There are another 10 jobs lined up and it just rolls on and on and on for five, 10, 20 years.

“Over time, you start to wonder at the impacts of that. This group was a chance to do something a little bit different; meet new people and try and reframe things.”

Sharon Mascall-Dare returned home from Iraq in 2017 and found out about MESHA’s precursor.

“I just found it was a wonderful place to be able get to know other veterans and support people who had had a much tougher experience than I’d had,” she says.

While she was in Iraq, Mascall-Dare became interested in people’s transition experiences and hearing how difficult it can be to move back into the civilian world.

“I really got a sense of that being away in Iraq from talking to a lot of the soldiers in the task group, so when I got home, I got involved in The Road Home.”

She attended a couple of the therapeutic programs as a participant and it inspired her to chase a qualification in education and psychotherapy. Now, she’s a peer-to-peer support worker.

Through MESHA, Mascall-Dare works with Theatre for Change.

“The way that Jo and Paulo lead it is they respect people’s privacy and respect that everyone in the room has been somewhere,” she says.

“By about week three, you’re really starting to see people come out of themselves. You see them share moments with other actors as we’re given tasks to perform, scenes to act out. You notice that people in the room start to connect with others and they’re finding a place of mutual support where they can just be themselves and relax.”