Calculating the impact of the 2021 Adelaide Festival

Adelaide Festival has declared this year’s event a “pandemic-defying success” after an economic assessment report released today showed it generated estimated gross expenditure of $42.5 million for the state.

The report – compiled by Barry Burgan on behalf of Economic Research Consultants – calculates the figure based on all economic activity associated with the festival, from ticket purchases and hotel and travel expenses, to job creation, spending in shops, restaurants and on side trips. The 2020 AF generated estimated gross expenditure of $70.2 million for SA.

This year’s results were affected by major challenges posted by the pandemic – such as international and state border closures and severely reduced crowd sizes and theatre capacity – but Adelaide Festival Board chair Judy Potter says she is in awe of what was achieved.

“Back in March, there was nowhere else in the world where a festival of this scale could go ahead. I am in awe of not only the economic impact this remarkable event had on South Australia, but the way in which the Adelaide Festival team adapted, allowed for every contingency and still managed to bring the Adelaide Festival 2021 program to life in the most glorious way.”

There’s good news for those who missed out on seeing the spectacular stage show The Pulse, which was presented as part of the 2021 Adelaide Festival program and featured 30 acrobats from Gravity & Other Myths sharing the stage with 30 singers from Aurora choir (Young Adelaide Voices).

The show will have a short revival season at Her Majesty’s Theatre from July 28-31 (tickets here), before heading to the Darwin Festival in August.

Reviewing The Pulse for InReview during the Adelaide Festival, Jo Vabolis described it as a nail-biting performance that “marries brute strength with intricate choreography and singing that at times elevates the work to the sublime”.

Art lovers have the opportunity to acquire works from a range of South Australian artists for prices starting at just $100 at the FELT fundraising auction this weekend.

One of the most important fundraising events on FELTspace gallery’s calendar, the annual auction will include sculptural works, paintings, mixed-media wall-based works and textiles from emerging and well-known artists, including James Dodd, Matthew Bradley, Louise Haselton, Amy Joy Watson and Roy Ananda.

There are two categories of works for sale: “small works” with a fixed price of $100 that will go to the first bidder, and “auctioned works” starting from about $250. The event will be held online via the FELTspace Instagram account across Saturday and Sunday (June 26 and 27), with works able to be previewed both on the FELTspace website and in the gallery (details here). 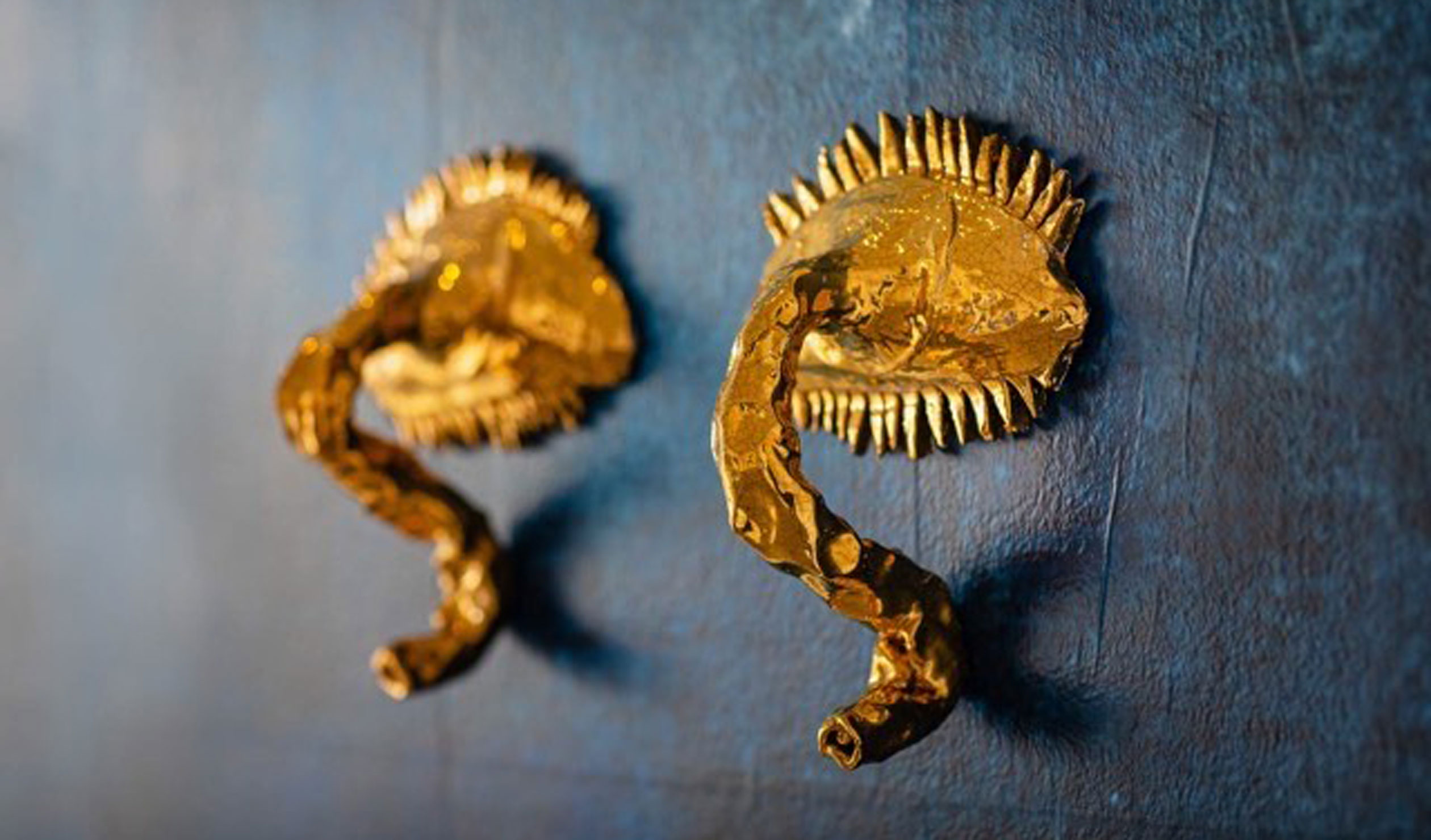 Cassie Thring’s Shiny Shape Shifter is among works for sale in the FELT fundraising auction.

Arts education, well-resourced grants programs, and initiatives to combat artist poverty are among key policy priorities identified by the Arts Industry Council of SA in the lead-up to the next state and federal elections.

AICSA, which represents more than 100 arts and cultural organisations and independent artists, developed the priorities from a Key Issues Survey it conducted in May.

“While the arts and cultural sector continues to grapple with the ongoing impacts of the COVID-19 pandemic, it’s clear to AICSA that our sector wants to see progressive and visionary policies that support long-term artistic practice and that improve the training, working and living conditions of artists,” says the council’s deputy chair, Jessica Alice.

“With the next South Australian state election occurring on 19 March 2022, and a federal election due to be called anytime between August this year and May next year, there is an opportunity to put forward some big-picture priorities for the future of arts and culture here in South Australia.”

One of the five key messages is the need for “a fair deal for artists”, with AICSA saying “forward-thinking policies such as an arts employment strategy, portable leave entitlements, basic income pilots, and strategies to combat artists’ poverty and precarity, and stop wage theft, will keep artists and art workers working – and making work – in South Australia”.

Other priorities identified (see the full details here) cover areas such as artist education; valuing First Nations arts and culture; supporting artists to work where they live in SA (through measures such as affordable housing); and ongoing and well-resourced grants and operational programs, fellowships, and public employment initiatives for artists and small-to-medium organisations.

The weight of Regret

There’s less than one week left to see Adelaide artist Ida Sophia’s 28-day durational performance Regret – a work that has so captivated visitors some have stayed up to two-and-a-half hours.

Presented at Floating Goose Studios in Morphett Street, Regret is described as an act of redemption, with Sophia confronting her regret that she was absent from her father’s side in his last month of life.

“I am spending the time I wish I had spent with him in the gallery, six hours a day, silent and fasting, unmoving from my chair as I watch an immense installation of flowers decompose, mirroring the effect of disease on his body,” she says.

Participants are invited to write their regrets on plaster tablets which are then attached to Sophia, who offers to carry them both metaphorically and physically (so far, they weigh around 10kg).

Regret continues until June 29, with daily performance times on the Floating Goose Studios website. On the final date, there will be a ceremony in which Sophia will cast off the regrets and participate in a talk with writer Farrin Foster, who recently wrote this article for InReview about the resurgence of performance art in Adelaide.

A new take on the Ern affair

Regular readers of InReview may recall that in April we published an extract from Adelaide author Stephen Orr’s new novel inspired by the Ern Malley literary hoax, while last month Samela Harris wrote of the lasting impact the 1940s affair had on her publisher father Max Harris.

This week, local musician Max Savage – who has been fascinated by the hoax for years – is bringing the story to life at the Cabaret Festival with ERN, a show in which he will perform alongside jazz talents Ross McHenry, Adam Page, Julian Ferraretto, Django Rowe and Josh Baldwin. Each night, drummer and painter Baldwin will create a visual work inspired by the affair on a 1.6m x2m canvas.

“This is not a simple story and I didn’t want to cram a simple narrative into 70 minutes and a nine by five-metre stage,” Savage says. “What I hope we’ve built is a gestalt, built from improvised music, poetry, songs and painting that brings something new to the labyrinthine history of the Ern Malley affair.”

ERN will be presented in the Space Theatre this Thursday and Friday. Read more about the show in this CityMag story. 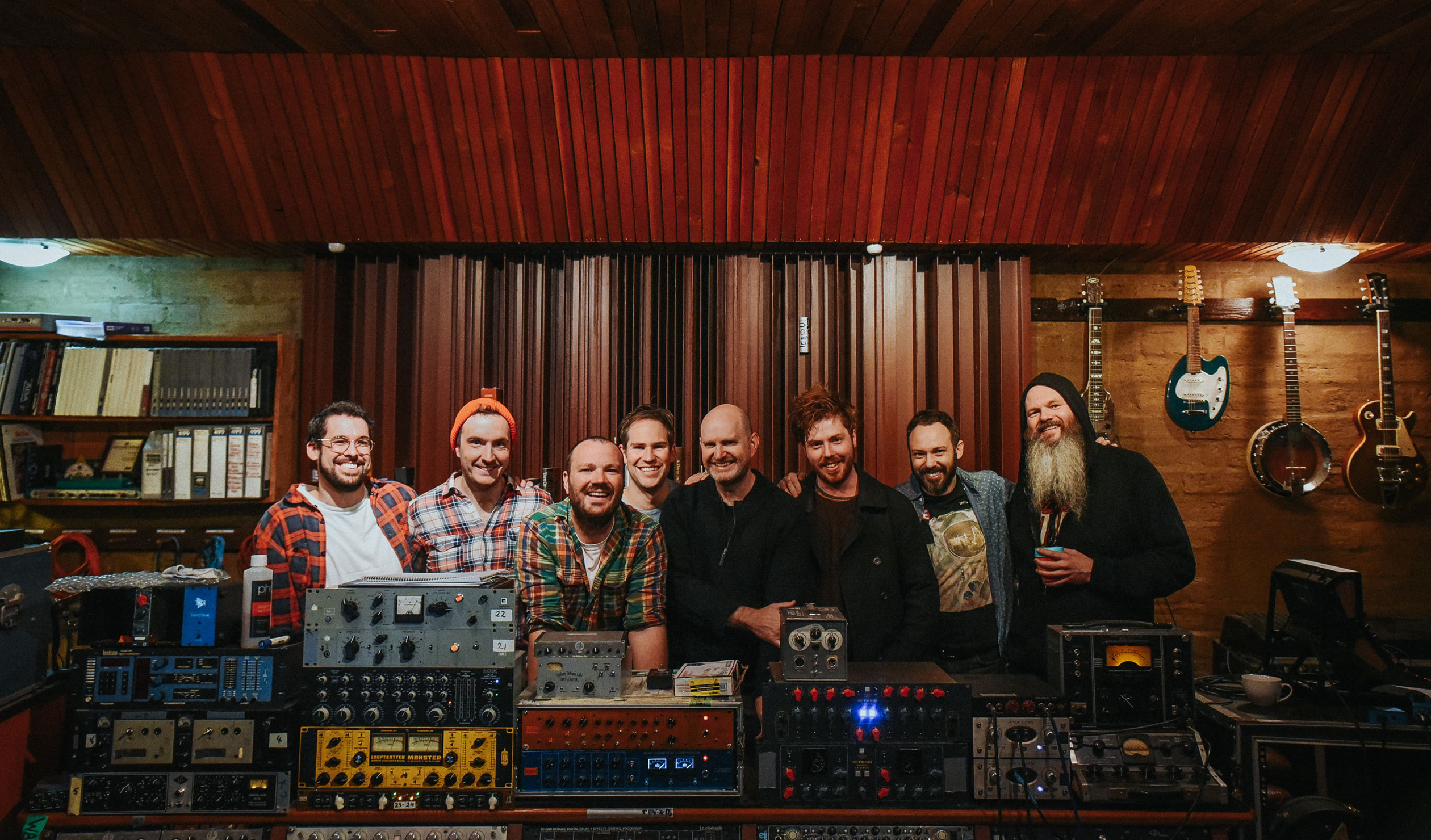 Max Savage (third from left) with other members of the ERN team. Photo: Jack Fenby