Kate Power is known primarily for her work with sculpture and video but she ventures into new territory with Bedroom, which will be presented by Vitalstatistix from this Friday. It is the culmination of a creative development process with NSW-based performance artist Sarah Rodigari, much of which occurred remotely during 2020.

In this Q&A with InReview’s  Suzie Keen, Power explains that the work is about “attempting to process something that is too painful to comprehend and how that affects the body”.

Bedroom began as a response to Vanessa Bell’s painting Bedroom, Gordon Square, which is on display in the Art Gallery of South Australia. What did you see in that artwork that inspired you?

I was invited to respond to a work of art at the Art Gallery of SA for a live edition of fineprint magazine. I was drawn to Bedroom, Gordon Square, 1912, tucked near the stairwell. In the painting a naked figure sits on the edge of a bed – her slumped gesture and lack of facial features gave me the impression of an affectless expression that seems to ring around the abstracted objects in the room.

This gesture, which drew to mind a release like an exhale, prompted me to think about how bodies respond to architecture and particularly private spaces like the bedroom. I reflected on what happens when we let go of the day in such a space and how this letting go can enable us to see what we’ve been holding onto.

How has that initial idea developed into the work you are presenting at Vitalstatistix?

The initial response was a five-minute movement piece. The gesture of the exhale was central to that work. I’ve gone deeper into what prompted this response and it has expanded into a portrait of processing sexual violence through text, movement, sculpture and video. 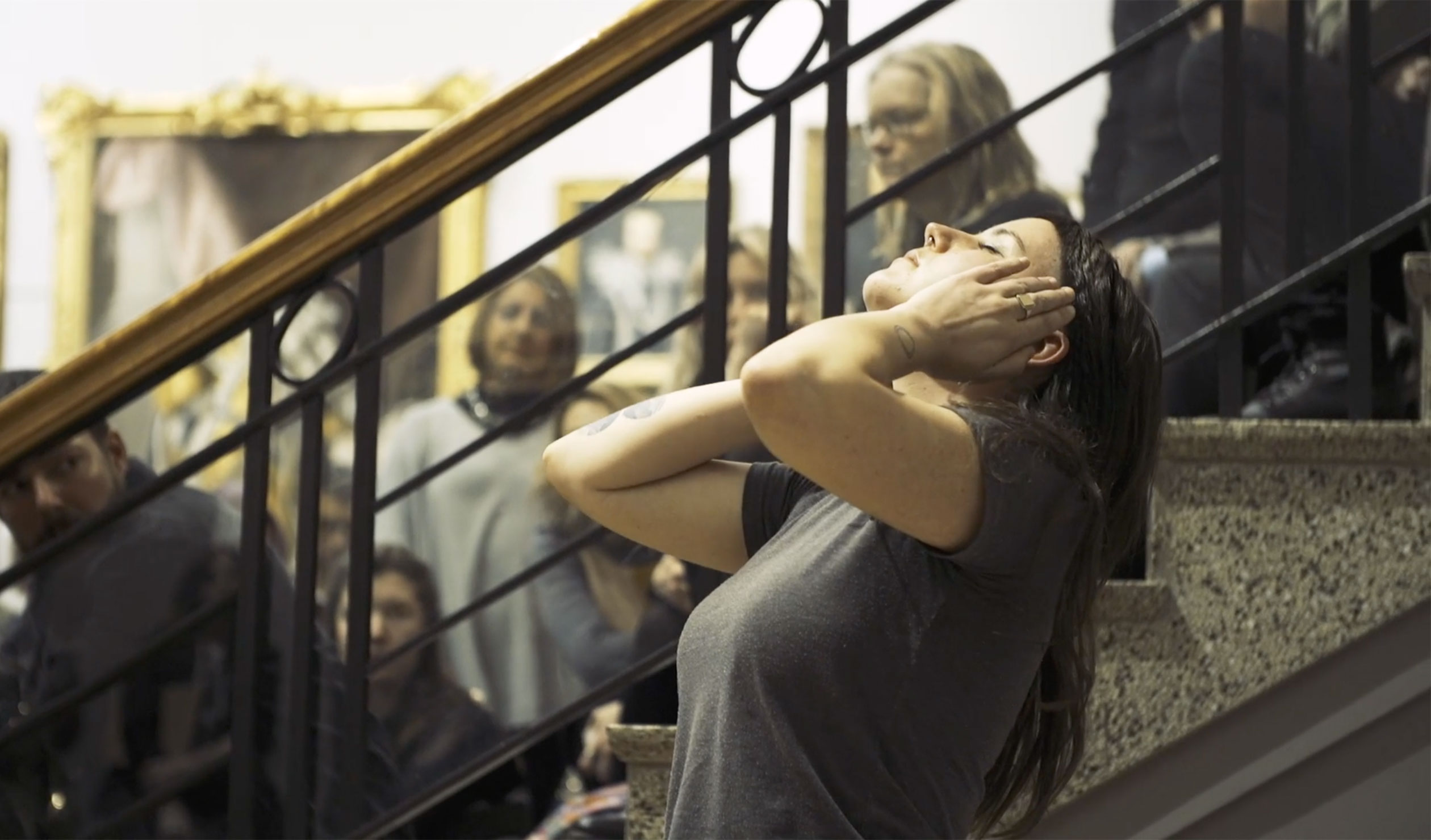 Kate Power originally responded to Bedroom, Gordon Square in a short performance at the AGSA for a live edition of fineprint magazine. Photo: Johanis Lyons-Reid

You’re primarily a visual artist, working in sculpture and installation – tell us about the sculptures you created for Bedroom and what they represent?

There are four sculptures in the installation. I started working on a papier-mâché form in 2018 that I have been consistently adding to since – it is larger than human-sized and is an absurd representation of emotional baggage and is referred to in the performance as representative of the digestive system.

There is a brass sculpture with a horn that traverses the space. It has a dominant presence but is never interacted with and I see this as a symbol of silence – almost like the antithesis of its implied capabilities of announcing something.

There is also an object that is an aggrandising costume but might also appear like an anus; and a video that spans the performance. The sculptures all speak to a process of literal and metaphorical digestion and internal bodily workings.

What ideas do you explore through the work, and what feelings do you hope to convey through your performance?

The performance is about attempting to process something that is too painful to comprehend and how that affects the body. It is about the way the body can hold on to sexual violence and power imbalances in both interpersonal relationships and in labour.

I hope to draw attention to how violence is carried in the body, when it is difficult to absorb consciously, but ultimately I hope to leave people with a kind of humorous solidarity in resilience. I think this can be applied to a variety of experiences where power has been abused, and can be read beyond the specifics of the work.

Bedroom is your debut live performance artwork, a genre that is enjoying a resurgence in Adelaide. Why do you think it is such a potent artform?

Usually I work with sculpture and video and for this work it felt important that my body interacted with these elements to speak to the power and vulnerability of the live moment. The breath, text and endurance of the performance felt necessary to convey the embodied states I’m exploring.

How important was your mentorship with performance artist Sarah Rodigari in helping you extend your practice in this way?

Undertaking the mentorship with Sarah has been an amazing experience for me both personally and professionally. Sarah has supported the project the whole way, giving me feedback on writing text for performance, thinking about sculpture in relation to movement and exploring voice and language. With this iteration of Bedroom (and being able to be in the same space physically), Sarah has expanded my perspective of these elements dramaturgically and had a huge influence on how I’ve approached making a work intended for a live audience.