The wonderful world of Tom Moore

A collection of glass artist Tom Moore’s fantastical hybridised animal/plant sculptures are currently in residence in the historic phone booths at Adelaide Railway Station in the first of a new series of exhibitions being curated by JamFactory.

The booths date back to the 1920s, when the station was built, and were among many amenities considered essential to cater to short and long-distance passengers at the time – including dining rooms, a cigar store, a wine saloon, a barber and a beauty parlour.

Today’s commuters may not ordinarily give them a second glance, but Moore’s colourful creations – on show until the end of May – turn heads. While much of his work has an element of humour or surprise and is inspired illustrations he enjoyed as a child in books by Edward Lear, Dr Seuss and Lewis Carroll, it also touches on contemporary social and environmental concerns.

The series of phone booth exhibitions is being developed through a partnership between JamFactory and Renewal SA, with future displays to showcase the work of other South Australian artists. Next up in the series is ceramicist Gerry Wedd, from June 5 until August 29.

The popularity of the Art Gallery of South Australia’s major exhibition of work by modernist painter Clarice Beckett has seen it extended by an extra week.

Clarice Beckett: The present moment opened on February 27 and was originally to have closed on May 16 but art lovers will now have until May 23 to see the display, which the gallery says has attracted visitors from across Australia. 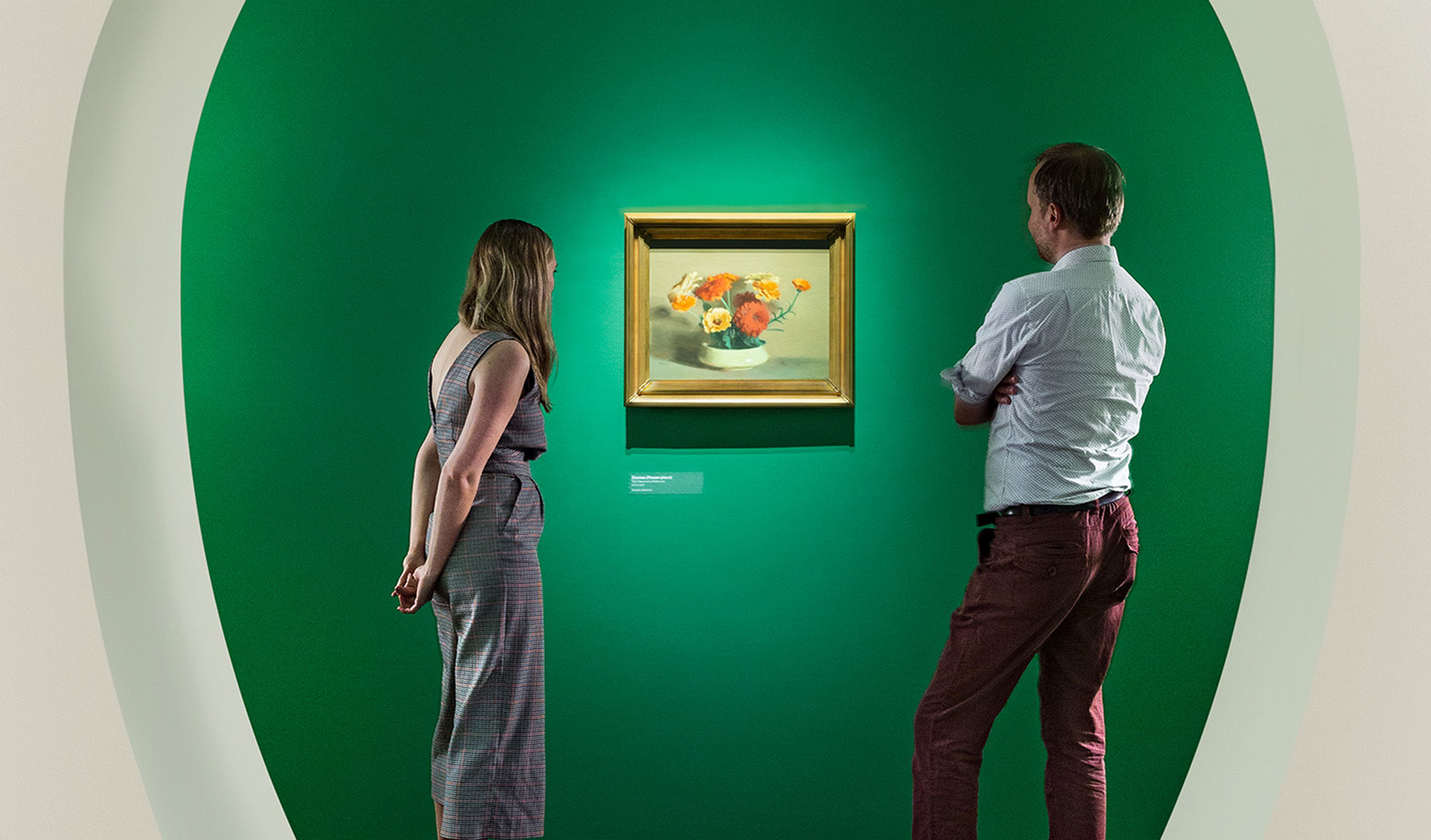 AGSA curator Tracey Lock has presented the 130 paintings in a way that creates a “sensory journey” from sunrise through to sunset and nightfall. The story of how Beckett was lost to Australia’s art history narrative for many years has also captivated gallery visitors.

“It’s been a thrill to witness this exhibition propel Clarice Beckett from a position of national prominence to one of international significance,” Lock says. “Finally, we comprehend the full emotional power of her work.”

Activities associated with The present moment include a First Fridays event in which poets Jill Jones and Alison Flett will respond to Beckett’s paintings (May 7), the premiere of a new work by musician Gabriella Smart with sound artist Daniel Pitman (May 7 and 15), and a  soundscape tour with violinist Simone Slattery (May 16). Read InReview contributor John Neylon’s article on the Clarice Beckett exhibition here.

Artist Shane Cook painting another one of his murals.

Visitors to the Adelaide Central Market in the coming weeks are likely to spot Adelaide artist Shane Cook painting a large Indigenous mural in the prominent Gouger Street entrance.

In commissioning the work, the Central Market said it had identified a prominent location next to its largest common dining area so the work will create a strong entry statement. The brief was for an Aboriginal artist to create a mural that “acknowledges and celebrates the Aboriginal cultures”.

Cook began practising as an artist at a young age, initially learning traditional painting from his mother, with his interest later extending into graffiti culture, street art and tattooing. He is also a youth mentor and has designed Indigenous Round football guernseys for AFL and SANFL teams.

The mural will be officially unveiled during Reconciliation Action Week.

South Australian emerging writers from under-represented groups in the screen industry are being encouraged to apply for a placement through the SBS Emerging Writers’ Incubator.

The incubator is a national three-year initiative co-funded by SBS, Screen Australia and state and territory agencies, including the SA Film Corporation. Each year, one SA writer will secure a 12-month paid placement in an Australian production company where they will develop ideas into treatments, participate in writers’ rooms, and work in other areas that increase their knowledge and skills.

SAFC CEO Kate Croser says the incubator supports its aim of increasing diversity in the South Australian screen sector: “This is a golden opportunity for any writer, but particularly for someone looking to build their credits in television and form relationships with renowned producers.”

Applicants must be from under-represented groups, including First Nations Australians, those from culturally and linguistically diverse backgrounds, people with a disability, women and people who identify as trans/gender diverse, those from the LGBTQIA+ community, and residents of regional and remote areas. Applications opened on Monday and will close on May 28; details here.

Through the Looking Glass

Described as “both a love song and a lament for Country”, Looking Glass is a new exhibition at FUMA of paintings, video and sculptural works by contemporary Indigenous artists Judy Watson and Yhonnie Scarce.

Queensland-born Watson draws inspiration from her Waanyi heritage for her practice, which is grounded in drawing and printmaking and often accesses archival material. A number of works in this exhibition were made in response to visits to English, Scottish and Irish sites of prehistorical significance – including Stonehenge – as well as British museums. The idea, she says, was to have “images of standing stone forms – shadowy or very ghostly presences – and the floating of Aboriginal cultural material across the top”.

Kokatha and Nukunu glass artist Scarce, who was born in Woomera, has previously created work inspired by the atomic bomb tests at Maralinga. She undertook research for Looking Glass in Birmingham, which has a history of glass manufacturing and is also where scientific calculations were made that led to the development of the atom bomb during World War II. 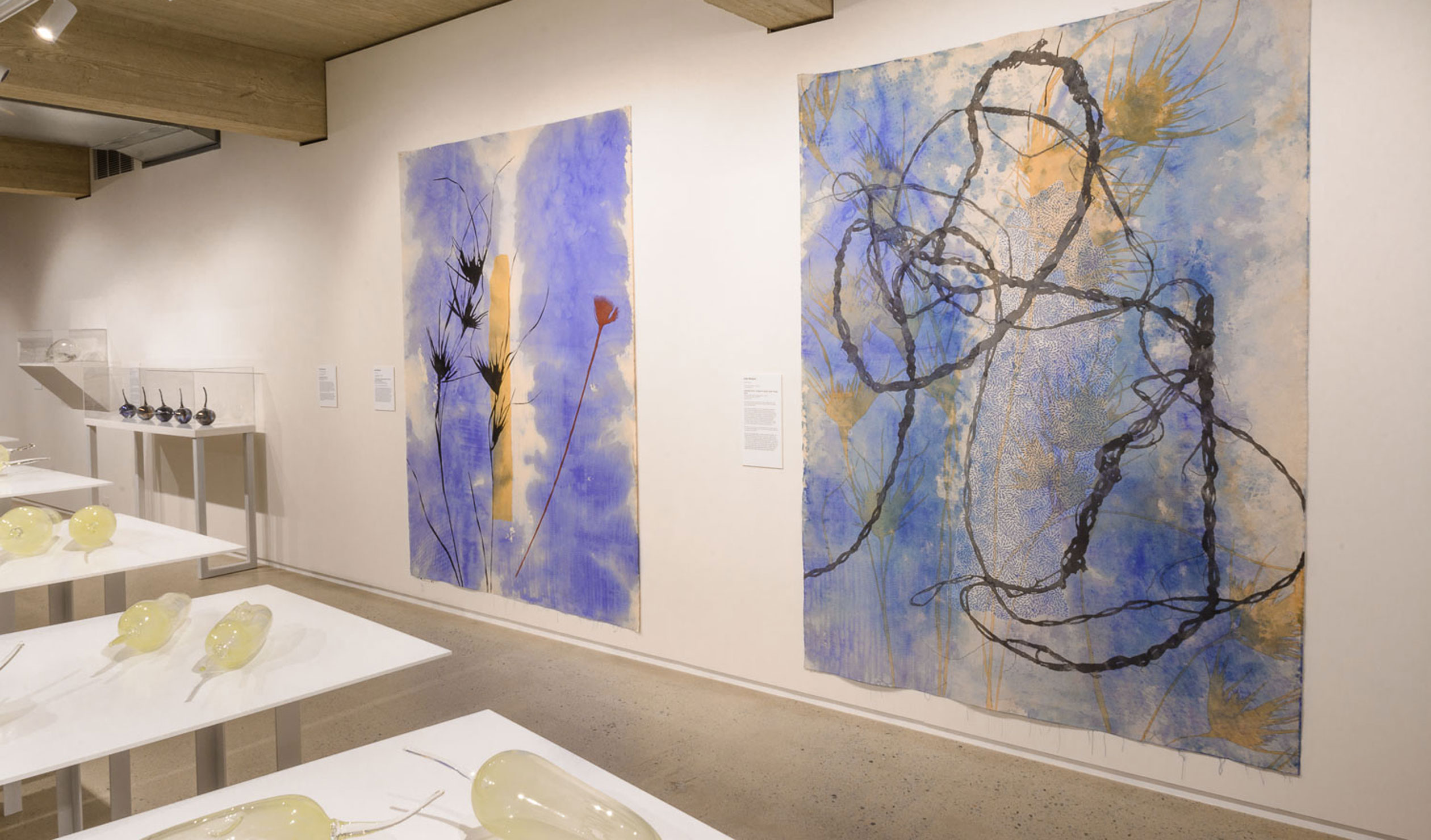 Looking Glass – organised by TarraWarra Museum of Art and Ikon in Birmingham with Arrernte and Kalkadoon curator Hetti Perkins – is touring nationally and at the Flinders University Museum of Art until July 2.

“The seductive beauty of Watson’s and Scarce’s works belies their powerful message about the sustained campaign of the destruction of Country, culture and community in Aboriginal Australia – their work is a kind of ‘tender trap’,” says Perkins.

Adelaide Hills author Pip Williams’ The Dictionary of Lost Words has scored another win, taking out the General Fiction Book of the Year award in this year’s ABIAs (Australian Book Industry Awards).

For Williams, whose novel was recently reviewed by InReview, the ABIA award comes on top of a string of other successes for The Dictionary of Lost Words, including being named The Indie Book Awards 2021 Book of the Year and winning the 2021 MUD Literary Prize for best debut literary novel by an Australian writer.

There’s just five days left to sign up if you want to be part of the 2021 South Australian Living Artists Festival, with registrations set to close on Monday, May 10.

Running across the month of August, SALA is open to all local visual artists regardless of age and experience, with participants able to choose to exhibit in a physical venue or online.  The festival website has a number of helpful registration resources, including an “Artist & Venue finder” for venues seeking artists and artists seeking venues, and a registration demonstration video.

Once registered, artists can also self-nominate for the SALA awards by filling out award nomination forms through the SALA online portal.

What we know today, Friday September 24

Ex-ICAC hits out at reforms as Vanstone flags resignation