New seats will be released for upcoming shows at the Adelaide Festival Centre ­after the announcement that its theatres are returning to 100 per cent capacity.

All the AFC’s venues, which include Her Majesty’s Theatre, have been operating at a reduced capacity of 50 per cent and, more recently, 75 per cent since they reopened after last year’s COVID-19 lockdown. However, SA Health’s approval of the centre’s latest COVID management plan has enabled it to fill the theatres once more, although audience members will have to wear masks to shows sold above 75 per cent capacity.

Among the first shows to release more tickets are Windmill Theatre Company’s Hiccup, opening this week, and State Theatre Company SA’s The Gospel According to Paul, which opens in the Dunstan Playhouse on April 19.

The DreamBIG Children’s Festival in May and the Adelaide Cabaret Festival in June will also sell shows to 100 per cent capacity and release new seats in the coming weeks. Several Cabaret Festival early-release shows, including the Variety Gala, sold out their initial allocation within just days of going on sale.

Mackintosh describes herself as an assemblage artist and says her artworks reflect her “evolving personal love affair with the landscape”. She collects, presses and dries natural materials found on KI’s wild south coast, which are then painstakingly glued and stitched to canvas to create intricate works.

Until January last year, Mackintosh’s mandalas were on show in the reception area of Kangaroo Island’s seven-star Southern Ocean Lodge, but they were lost in the bushfire that destroyed the lodge and ravaged the island.

The Diana Keir Art Award was introduced this year as the major prize in the Kangaroo Island Easter Art Exhibition and honours the memory of island artist Diana Keir, who died in 2019. It was judged by Art Gallery of SA director Rhana Devenport and Guildhouse chief executive officer Emma Fey, with the exhibition continuing at the Penneshaw Town Hall until April 18. 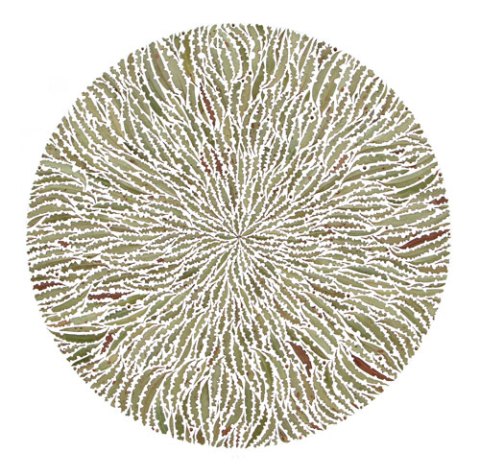 The ASO as a living collection

After a year-long project that involved observing the Adelaide Symphony Orchestra as a “living collection”, contemporary visual artist Michael Kutschbach has created a visual response that will be projected on screens in the East End and Adelaide Festival Centre.

Titled fuliguline, the multi-channel video work was created through the Guildhouse Collections Project, which provides an opportunity for an artist to delve deep into the treasures of an important state collection to produce new work for presentation. In this case, Kutschbach viewed the orchestra itself as a living collection, using his research-based residency to explore interactions between the musicians, their instruments, sound and the theatre space.

“My initial observations were centred around thinking of the greater ASO organisation in terms of a living organism… Using the analogy of a Siphonophore, (a type of sea creature akin to a jellyfish yet actually a co-dependent colonial organism), I tried to gain a sense of the ASO not as a rigid hierarchy of separate roles, but rather as a far more organic and dynamic body of individual and co-dependent phenomena.”

Fuliguline consists of a variety of passages of filmed, studio-material experiments which he says come across as “abstract, haptic, visceral scenes of material in motion” that aim to give the viewer a powerful sensory experience. From April 9, the work will be projected in the East End and on the Adelaide Festival Centre’s King William Road media screens and in its Festival Theatre foyer. 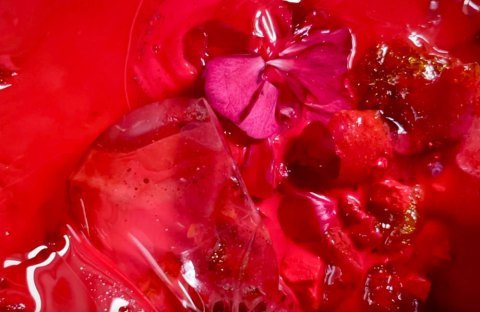 From crime to craft with Writers SA

Writers SA has launched its autumn program, with talks and workshops covering topics ranging from historical crime scene investigation and feminist noir to podcasting and tax time for creatives.

The program kicks off on April 28 with the centre’s monthly free think-tank, followed on May 1 by an online talk by US historical romance author Jeannie Lin, who will discuss historical Chinese investigation methods as well as offering insights on how to weave intricate research details together to create vivid settings, characters and plot.

Other autumn events include a session on feminist noir with Victorian novelist and screenwriter Anna Snoekstra; “writing a series” with CS Pacat (author of the Captive Prince trilogy); a workshop on telling stories in audio form led by Alicia Carter and Lauren Butterworth, creators of the Deviant Women podcast; a writing studio with writer and restaurateur Durkhanai Ayubi, author of the recently published Parwana cookbook; and “emotionally engaging your reader” with award-winning crime writer Emma Viskic. See the full program on the Writers SA website.

Two $5000 mentorships have been earmarked for South Australian regional visual artists, designers and craftspeople thanks to a new three-year partnership between Country Arts SA and Guildhouse.

The partnership specifically seeks to support regional artists through Guildhouse’s well-established Catapult program, with one of the mentorships  allocated for a young person aged 26 years or under.

“The Catapult program is special in that the structure and focus is completely determined by the applicant,” says Country Arts SA visual arts program manager Lauren Mustillo. “This is hugely important for regional artists who may be seeking specific skills that just don’t exist in their local communities.”

Catapult provides funding and support for artists, craftspeople and designers to develop their practice guided by a mentor of their choosing, with previous recipients including visual artist Tom Borgas and jeweller Regine Schwarzer.

Multiple Catapult mentorships are available for 2021, with applications opening yesterday and due to close on May 24 (details here).