As he sat down in the chill mountain air with his watercolours, Sir Hans Heysen would never in his wildest dreams have imagined that the lonely and forbidding great mountain in front of him would one day be a hotspot buzzing with tourist-laden helicopters.

Indeed, helicopters had yet to be invented.

But clearly, Australia’s greatest landscapist recognised something very special in this ancient and dramatic old mountain, since it was one of the very few things he chose to paint on his brief trip to New Zealand in 1907.

Its name is Mount Earnslaw. And, as history has revealed, Heysen was not the only person to be awe-struck by the special spirit in that imposingly bleak old South Island mountain with its hanging glacier.

More than 90 years later, New Zealand filmmaker Peter Jackson and his crew recognised the spooky wow-factor in that same peak and they also chose to reproduce it – but this time as part of a blockbuster film project.

Mount Earnslaw became part of “Middle Earth” in Jackson’s cinematic version of one of the most popular works of fiction of our times, The Lord of the Rings by JRR Tolkien. It featured it in the opening sequence of The Two Towers, the second film in the trilogy.

As a result, in the place where our Hahndorf arts legend once sat upon his painting stool in altitudinal peace, silently painting that huge, craggy spectacle, the mountain air has been swarming with choppers taking fans on Hobbit tours. Grand Mount Earnslaw has become one of the must-see landmarks of the Lord of the Rings tourism phenomenon.

Was Heysen prescient? Maybe so. He had an uncanny eye for landscapes there and here. Those vistas and tree-scapes he painted throughout the Adelaide Hills, the Fleurieu Peninsula and the Flinders Ranges have been immortalised for subsequent generations not just through his artworks but also as the world’s great wilderness treks, the Heysen Trail, named in his honour.

The painting of Mount Earnslaw has been little seen by the public. It has just emerged from a private collection, arriving onto the market for the upcoming Elder Fine Arts auction. It is among a group of superb Sir Hans Heysen landscape paintings and three gorgeous florals by his talented daughter Nora Heysen; altogether a bit of a Heysen coup.

The painting (valued at between $5000 and $8000) may be viewed at the Elder Fine Arts Gallery at 106 Melbourne Street, North Adelaide, along with the full catalogue of hundreds of Australian and international works by artists such as Hugh Sawrey, Pro Hart, and Norman Lindsay coming up for auction on December 6. It is also online here. 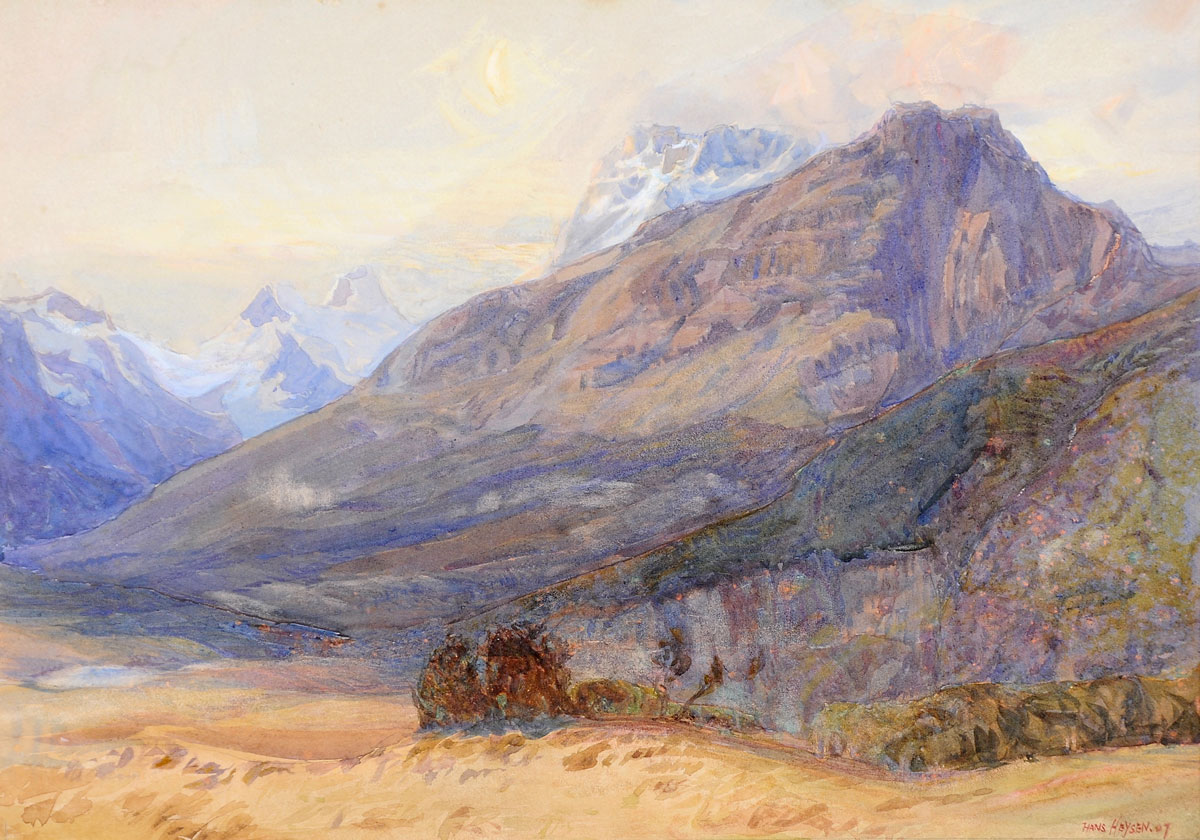