Held during COVID-19 amidst a global emphasis on racial equality, Alice Springs’ annual Parrtjima Festival has received nation-wide attention this week as it places a spotlight on ancient culture with the use of modern technology and light installations.

Held from September 11 until it finishes this Sunday, Parrtjima has attracted 10,500 attendances across the first six nights, despite border restrictions which meant the absence of headline musicians such as Dan Sultan and Archie Roach, who were originally billed to play at the festival in April.

Now in its fifth year, the 10-day festival was rescheduled from its annual April fixture to September, showcasing a display of large-scale light installations within Alice Springs Desert Park, complemented by a program of talks, music, and workshops.

Parrtjima Festival’s First Nations Adviser and Curator Rhoda Roberts says the event is the only authentic Aboriginal festival of its kind.

She says through celebrating the oldest continuous living culture on earth, Parrtjima has a role to play in creating conversations about the many social challenges faced by Indigenous Australians.

“We’ve come through so much and we have many challenges, and of course, major issues in our communities, and lots of trauma,” she says.

“But here’s one thing that is our advantage, and that’s our culture.”

This year’s Parrtjima Festival also has a strong focus on the environment, with installations themed around water, the cosmos, and country.

“In the old days, everything was dictated by the country. The landscape and the seasons dictated when you go out and harvest, when you travel, where there was water. If we can share a little bit of that knowledge, people will start to understand that connection,” Roberts says.

Although the wider program has been scaled back this year, the festival still includes an array of illuminated sculptural pieces against a backdrop of the centrepiece installation; a projection of moving images on a two-kilometre span of the Macdonnell Ranges.

The installation is accompanied by music and narrated by Roberts and traditional owner Benedict Kngwarraye Stevens, who tell stories of Arrernte Country. 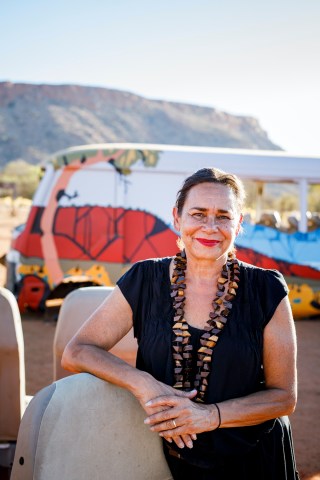 Visitors can explore the various installations of Desert Park, where there is an area to be seated and listen to the audio that accompanies the light show. The park’s large open space enabled the festival to go ahead under social distancing guidelines.

“Light festivals have become really big around the world and people see them as family-friendly events,” Roberts says.

“But this is the most unusual light festival in that we’re in the heart of Australia, in the desert, with significant work that often tells ancient oral stories.

“I really don’t think there’s anything like it in the world.”

In curating the festival, Roberts has consulted with a network of respected Arrernte people who advise on the cultural appropriateness of the paintings for the country in which they are being displayed. 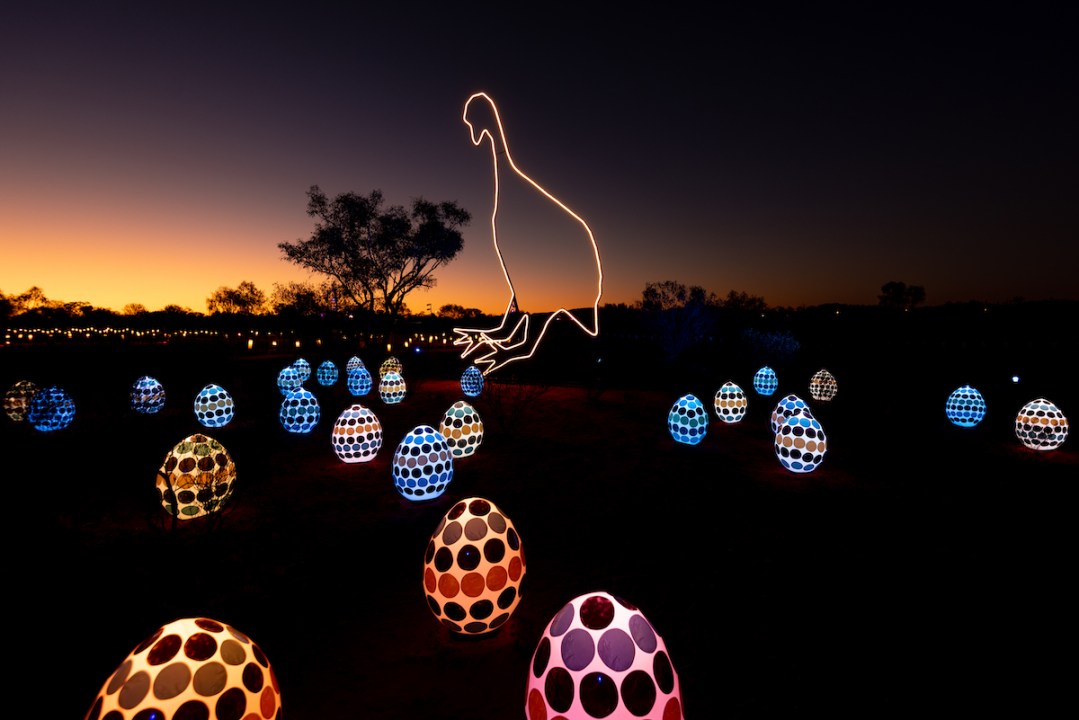 “The Macdonnell Ranges are a very special place for the custodians, but when they see what we’re doing with the lights and how we’re trying to tell the stories and give information, they’re blown away,” Roberts says.

“It’s a challenge to every year come up with a different light show that tells another story, but the custodians are very moved by this year’s installation.”

Following an illuminated network of pathways around Desert Park, visitors come across the giant Emu Laying Eggs at Night by Lachlan Dodds-Watson.

The sculpture ties in with the Dark Emu of the night sky, which is currently visible among the Milky Way at this time of year.

Other highlights included a talk with Walkley Award-winning journalist Stan Grant, who was live-streamed from Sydney and interviewed by Roberts to an audience in Todd Mall. 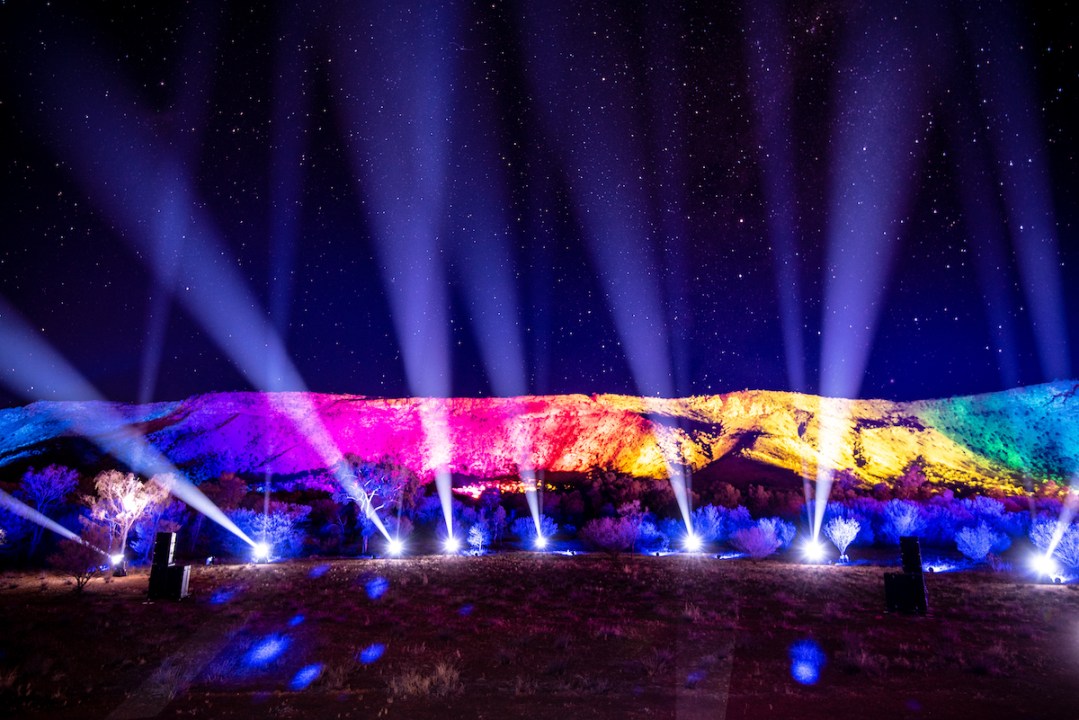 The festival runs concurrently with the Desert Mob exhibition which is held at Alice Springs’ Araluen Arts Centre. Featuring 177 artists across 29 art centres, Desert Mob is one of the best opportunities to experience indigenous art. The exhibition runs until October 25 and can also be viewed online.

Parrtjima Festival will return to the Red Centre in 2021 from April 9 to 18, when it will have a broader scope, seeking expressions of interest for artists across the Northern Territory, and not just the Central and Western Desert region.

In 2022, the festival will for the first time encompass the work of artists from across the nation.