Ben McHenry, senior collections manager of earth sciences at the museum, says opal fossils are “one of the nation’s great wonders”.

“Dug from an opal mine at Coober Pedy, in life this moon snail (Euspira reflecta) was an active sea-floor predator preying on sessile bivalves such as mussels and cockles.

“Using its file-like teeth it would drill a hole through the protective bivalve shell and eat its victim from the inside out.”

The moon snail, which is only around the size of a 10c coin, is on special display from today in the Opal Fossils Gallery of the SA Museum, which has the world’s largest collection of Australian precious opals.

It is one of three opalised fossils from the Early Cretaceous Period – around 100 million years ago – that are featured in the new stamp series. The others – an opalised pine cone, dinosaur tooth and wood fragment – are all from the Australian Opal Centre.

McHenry says the best-quality opal can often be found in fossils.

“Over millions of years the moon snail was opalised through a lengthy process where the original fossil was dissolved by acidic groundwater and created a large void, which was later filled with opal deposited from super saturated siliceous fluids,” he says of the SA Museum’s opalised moon fossil.

Moon snails still exist today, with the museum saying both their shells and “crescent-shaped jelly egg masses” are commonly found along Adelaide beaches. 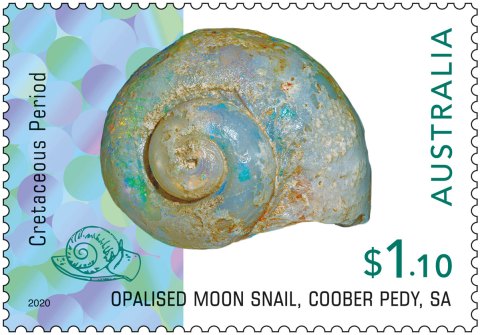