Text and language are the common link in the three distinct bodies of work inaugural Guildhouse fellow Troy-Anthony Baylis is showing in his Nomenclatures exhibition opening at the AGSA today as part of the South Australian Living Artists (SALA) Festival.

There’s a playfulness to the works, which draw on elements of pop culture and queer aesthetics, but at the same time Baylis – a descendant of the Jawoyn people from the Northern Territory – also explores themes such as colonialism and migration, seeking to reconcile different perspectives of Country.

Immediately catching the eye of visitors on the rear wall of the gallery vestibule or foyer are his Glomesh and faux-mesh creations, part of a series called Postcard that he began in 2010 but which also includes a work being shown for the first time.

“I get them through hunting and gathering in stores and then I skin and fillet the bags – I take the lining out and cut off all of the wire that goes around the outside to make the shape, then with a pin and magnifying glass or a sewing needle and a magnifying glass, depending on the size of the pixels, I undo them by hand and then join them back together again so they’re seamless surface structures.”

The shapes he creates from the mesh reference the breastplates or “king plates” that were bestowed upon Aboriginal people by the early colonial governors, and which sometimes caused conflict among Indigenous communities.

Each of the pieces feature text created from different-coloured mesh, such as “To Victoria Square from Katherine Gorge” (which references Baylis’s own journey), “To Nelly Bay from Mona Vale” and, the most recent, “To Mole Creek from Adventure Bay”.

“These place names, which were all dragged from Europe and North America into Australia, could also be the names of Sista Girls or drag queens speaking to each other… all of those king plates have become kind of queen plates, so it’s to one place from another place or to this person from another person.”

It is painstaking work, with each artwork made from up to 40 bags – some dating back to the ’60s – and completed over a year.

“My partner and friends can tell when I’m in Glomesh and faux-mesh-making mode, because the size of the tomato pieces I cut up for making the salsa are particularly neat and particularly tiny,” he says, laughing.

“I’m not convinced either way whether the making process is a good avenue for my fidgety behaviours or whether it actually just promotes it, but in any case I’m making something of it!”

On the side walls of the gallery vestibule are eight works that required equally painstaking craft. They make up Baylis’s latest series, Nomenclature, which was inspired partly by two months he spent living in Berlin during  his Guildhouse fellowship.

He became curious about why some towns in South Australia and elsewhere had multiple names, and was driven to research the Nomenclature Act of 1917 which saw German place names such as Hahndorf, Klemzig and Lobethal changed as a result of anti-German sentiment during World War I. Later, many of the names were changed back again.

For Nomenclature, Baylis has created woven and stitched textile works made from recycled canvas blinds. The works, which he describes as landscapes, bear the German and Anglicised names of a particular town, with the original Aboriginal place name sewn on top.

“It’s basically reconciling the multiple names within the work,” he says

“A weave involves the tension of the warp and the weft, so it’s also keeping this tension and suspense – and there’s even that tension about trying to decipher which word you can see the most, because they’re playing against each other.” 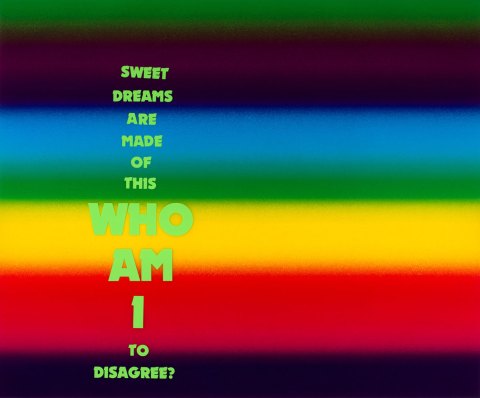 While the use contrasting colours is integral to the optical trickery of the layered words in Nomenclature, Baylis has given free rein to his love of bold color – and music – in his Tell Them Their Dreaming series, which was also created during his Guildhouse fellowship.

It comprises 19 framed individual text works or collages on rainbow-coloured paper, which are displayed on custom-printed wallpaper of the same design across two walls in the art gallery café area. Baylis found the plastic-coated paper used in the series while he was in Berlin, and collaborated with his Brisbane-based brother Ash Baylis, who has a sticker business, to turn it in into die-cut stickers. 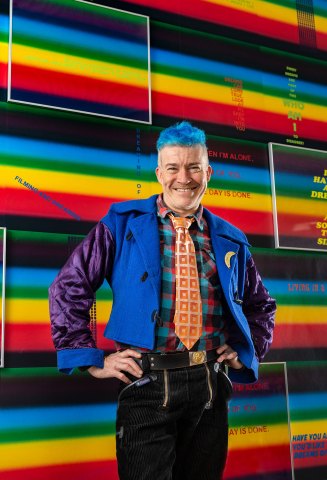 Troy-Anthony Baylis with Tell Them Their Dreaming, in the AGSA. Photo: Saul Steed

Each work features lyrics from a song that reference dreams, including from artists as diverse as the Eurythmics (“Sweet Dreams”), Adelaide band The Masters Apprentices (“Living in a Child’s Dream”), Paul Kelly (“Nothing But a Dream”) and American punk band Wayne County (now Jayne County) and the Electric Chairs (“I had Too Much to Dream Last Night”).

The title itself is a riff on a line from the classic Australian film The Castle, while also referencing the spirit of gay artist David McDiarmid’s 1994 Rainbow Aphorisms series, which included the aphorism: “When I want your opinion I’ll give it to you.”

Troy-Anthony Baylis’s Nomenclatures is at the Art Gallery of SA until October 4. The artist will be discussing his work and his residency in Berlin with curator Leigh Robb in a Tuesday Talk podcast on August 25.

The AGSA is also celebrating SALA this evenint with an online First Fridays event from 5pm.