Buddhist philosophy, expressed visually through its art, is particularly concerned with the nature of individual wellbeing and the effect that mental anxiety has on us.

The self-cherishing desire, sometimes bordering on desperation or addictive narcissism, to sustain a long and healthy life is shown its visual antithesis in the Art Gallery of South Australia’s White Tara, which was created in the 18th century in Tibet.

Followers of the Himalayan tradition of Buddhism believe that White Tara is a spiritual role model, known as a bodhisattva, a “being who holds to the essence of enlightenment”.  Depicted as a beautiful young woman, she is the embodiment of compassion’s selfless power to remove life-threatening circumstances and bestow the positive blessings that may accompany a long and healthy lifespan. 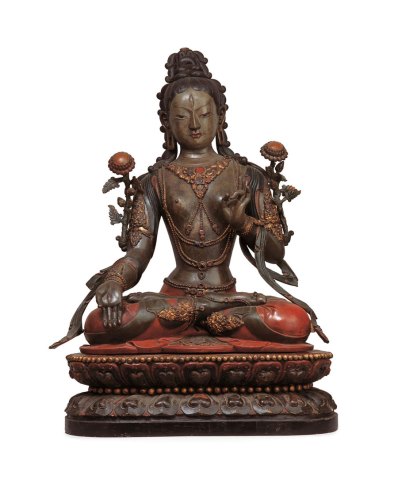 Each element of the White Tara image conveys deep meaning. White Tara sits on a lotus throne symbolising the capacity for our minds to blossom like an unblemished lotus flower rising above the quagmire of existence. Her white skin, much darkened with age on the Art Gallery’s sculpture, is the colour of serenity.

White Tara’s body ornaments represent the bodhisattva’s willingness to assume the appearances of material existence in order to render assistance to others.  Her right hand makes the gesture of granting all wishes.

Significantly, the statue sits in the lotus posture that is familiar to students of meditation and yoga. Over the past 50 years there has been widespread interest in Buddhist philosophy and mind-training techniques. The Buddhist understanding of the mind has been explored in modern psychology, while visualisation methods have been adopted by psychotherapy.

There are considered to be two fundamental forms of meditation practice. Concentration, or single-pointed, meditation and mindfulness meditation that is known as vipassana in the ancient Indian Pali language. A classic Buddhist definition of vipassana is the awareness of the arising and passing away of all mental and physical phenomena.

Mindfulness, also called insight, meditation is often regarded as the practice most suited to the contemporary world where our lives are ceaselessly consumed by transitory daily activities and mental distractions. Nevertheless, many meditation students experience great difficulties in maintaining a regular daily meditation routine. Rising from the cushion or chair at the end of each session, the mind again instantly chases every thought or physical sensation as if it has an external reality. Once more our feelings become overwhelmed by insatiable desires for personal satisfaction, material profit and social approval. Or we are seized by agitation, remembering illness and the inevitability of death waiting us.

If we look closer at White Tara, sitting cross-legged in the meditation position, surprisingly we discover she has several extra sets of eyes – on the palms of the hands and the soles of her feet – as well as a third eye on her forehead.

White Tara’s seven eyes represent her enlightened ability to see all existence and perceive the most suitable means for bringing happiness to others. They are a reminder for us to consider the best motivation for commencing the study of mindfulness meditation. If we begin meditation practice with a self-interested motive then we will fail because the nature of the narrow mind is to be always restless and quickly bored. As an alternative motive, we can cultivate mind-training with the aim of achieving White Tara’s empathetic understanding towards those around us, whether friends, strangers or enemies.

This universal compassion, a term described by the 14th Dalai Lama, Tenzin Gyatso, thus becomes the inspiration for a well-grounded meditation practice that endures due to its altruistic motivation. The great 8th-century Indian saint, Shantideva, expresses this goal in his famous bodhisattva vow:

For as long as space remains,
for as long as sentient beings remain,
until then may I too remain
to dispel the sufferings of the world.

The Art Gallery of SA is currently closed to the public due to the COVID-19 pandemic, but is scheduled to reopen on June 8.