“Craftivism” is a form of do-it-yourself solo activism, where instead of taking to the street and waving banners, individuals express social or political beliefs creatively and often on their own.

Stitch & Resist was originally conceived with the aim of documenting the current political climate, with public workshops scheduled to take place during South Australia’s History Festival, and sessions planned with specific groups such as domestic violence survivors or wellbeing advocates.

However, as a result of the COVID-19 pandemic – which forced the cancellation of this year’s History Festival and the temporary closure to the public of the Centre of Democracy – the scope of the project has been broadened.

Sullivan says it will now also focus on the implications of the COVID-19 crisis, as well as broader social and political issues.

“We [the Centre of Democracy] are keen to emphasise how important it is that collecting institutions like ours document historic moments, like the one in which we find ourselves, and create and collect material culture for future generations,” she says.

“We are hoping that at least some of the pieces that those who get involved in Stitch & Resist contribute [digitally and/or in the original] will explicitly address COVID-19, whereas others will remind us that life goes on and that most of the issues people were concerned about before the virus are no less pertinent during it – in fact, some problems/issues, domestic violence being one, will be exacerbated by the current crisis.” 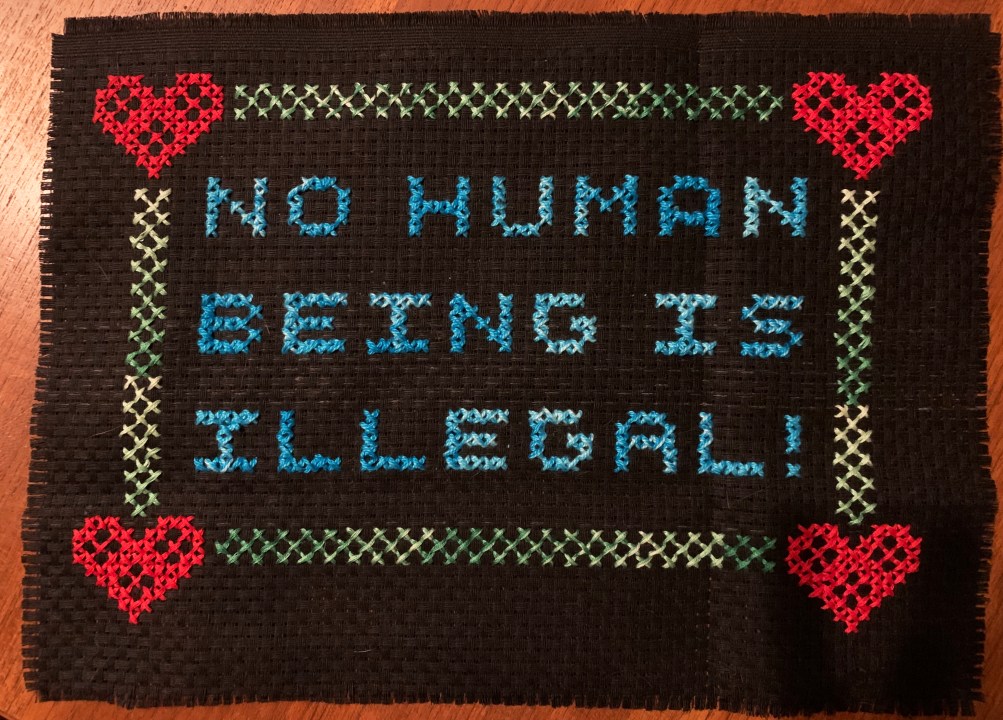 Through the project, the Centre of Democracy aims to examine how daily civic life will be disrupted through the COVID-19 crisis, and how individuals respond and stay well.

A website has been established online for people to upload photos of their needlework creations. A resource pack offers information on how to cross-stitch and also has patterns, some of which include messages relevant to the coronavirus such as “Stay at Home” and “Preparedness Prevents Panic”.

Images uploaded online will become part of a digital library and will be preserved by the Centre of Democracy and the History Trust of South Australia.

A message statement from the Centre of Democracy suggests that although individuals cannot physically come together to debate ideas or take action, Stitch & Resist is a way to protest safely while isolated.

“Our key hopes for Stitch and Resist is that it will foster community wellbeing, motivate people to become change-makers, and facilitate the sharing of stories that celebrate our shared humanity,” an emailed statement said.

Sullivan says the needlework must include political messaging, but depictions of “flowers or bears” among text is encouraged. All content uploaded to the site will be monitored, and hate speech targeting specific groups, communities or individuals will not be tolerated.

A public Facebook group has been set up, and virtual workshops and hangouts will be rolled out over the next couple of weeks so participants can create cross-stitch works with friends or colleagues online while discussing issues of concern to them.

Sullivan says a private Facebook group has also been established for people from the centre’s partner organisations who are facilitating virtual workshops.

“I want the person who facilitates or the people who facilitate those ideas to actually tell me what they think needs to be said,” she says of the partnerships.

“You might partner with Extinction Rebellion and they might be running workshops with their members to talk about climate change.”

Next year the Centre of Democracy will exhibit the works but focus on the sentiment embroidered rather than the craftivism itself, exploring “all the things that people care about” – which could include animal rights issues, the refugee crisis or the fallout from COVID-19.

One of the perks of cross-stitching, Sullivan says, is that its repetitiveness can have a meditative effect.

Her first piece took 12 hours to complete, but the second attempt only took seven and she was much happier with the result.

“You just follow a pattern. There’s nothing difficult about it.”

The last day to submit cross-stitch works for the project is August 31, 2020. 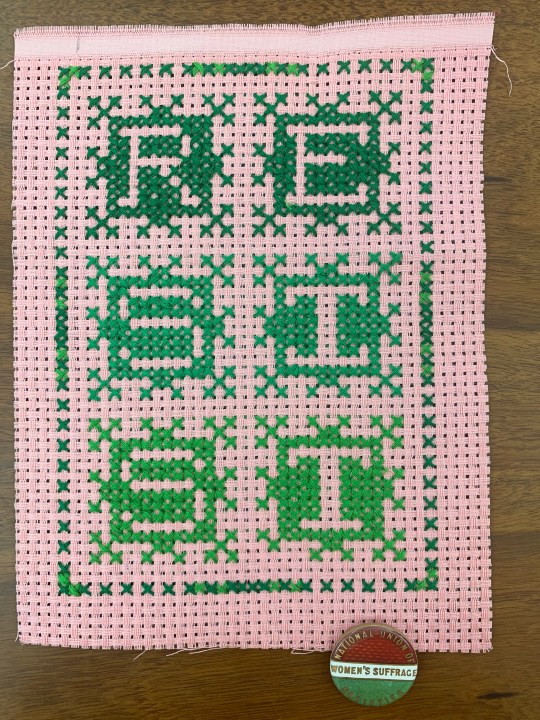