The Art Gallery of South Australia’s Morris & Company gallery has recently undergone a major redesign for the first time in several years, reopening last weekend with a completely new look.

The Gallery 18 display has been reimagined with a new presentation of iconic works including furniture, ceramics, wallpaper and textiles from Morris & Co and the wider British Arts and Crafts movement.

William Morris (1834-1896) is one of the most prolific and well-known designers of the 19th century. Along with his coterie, Pre-Raphaelite Brotherhood artists Edward Burne-Jones and Dante Gabriel Rossetti, and architect and designer Philip Webb, he spearheaded the Arts and Crafts movement, a reaction against what the group perceived to be the poor state of decorative arts and design, manufacturing, and factory working conditions as a result of industrialisation.

Morris argued for a return to a handmade means of production, with no separation between the designer and the maker. 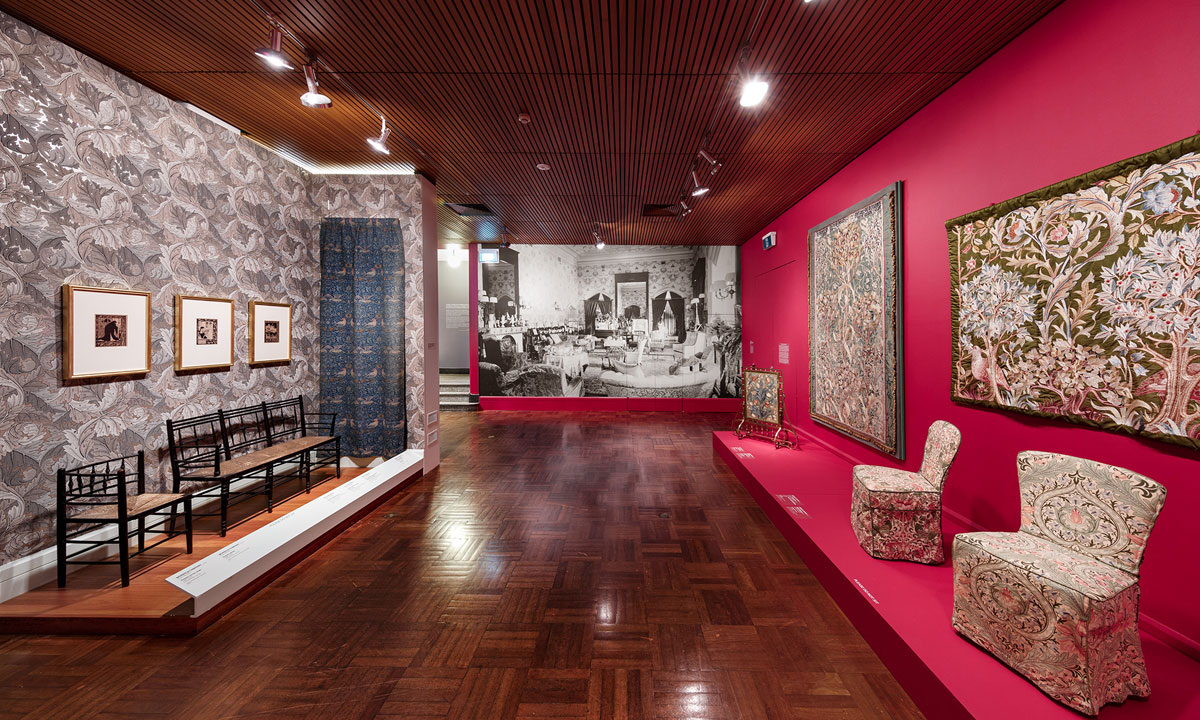 Morris’s designs were inspired by medieval art and nature, with floral and faunal motifs a trademark. He trained other designers, including JH Dearle, to produce work in the same aesthetic. In 1875 he took over the firm, renaming it Morris & Company.

While Morris is now perhaps best known as a designer, in his lifetime he was well-known as a prolific author, poet, and translator. He founded the Kelmscott Press in 1891 and focused his attentions on book publishing in the final years of his life, producing small print runs on handmade paper.

Influenced by the design and craftsmanship of medieval illuminated manuscripts, Morris wanted the design of the books to be as important as the words, creating typefaces and elaborate borders to surround the page. His novel The Well at the World’s End is on display.

The AGSA’s collection of Morris & Co is the largest outside of Britain and much of it has links to Adelaide’s prominent Barr Smith family, who were one of the firm’s most significant international clients, with three generations of the family extensively furnishing at least seven houses in and around Adelaide between the 1880s and 1920s.

William Morris’s daughter, May Morris, became one of the leading female designers of the Arts and Crafts movement and ran Morris & Co’s embroidery department from 1885. She designed embroidery kits which were dispatched from Britain to clients around the world. These included a design marked in outline, along with a small trial sample showing the stitching techniques to be employed. The designs could also be purchased “complete” for a higher fee.

The Barr Smiths, and other Adelaide clients, purchased several of these kits for table covers, portières (doorway hangings) and smaller embroideries often used for cushions or in screens. A new AGSA acquisition, Fruit garden portiere, was embroidered in Adelaide by the Barr Smith’s daughter, Erlistoun Mitchell, and is on display. It is one of Morris’s most outstanding embroidery designs, containing a complex arrangement of flowering and fruiting trees, connected by vine tendrils and acanthus leaves, with poetry by her father at the top. 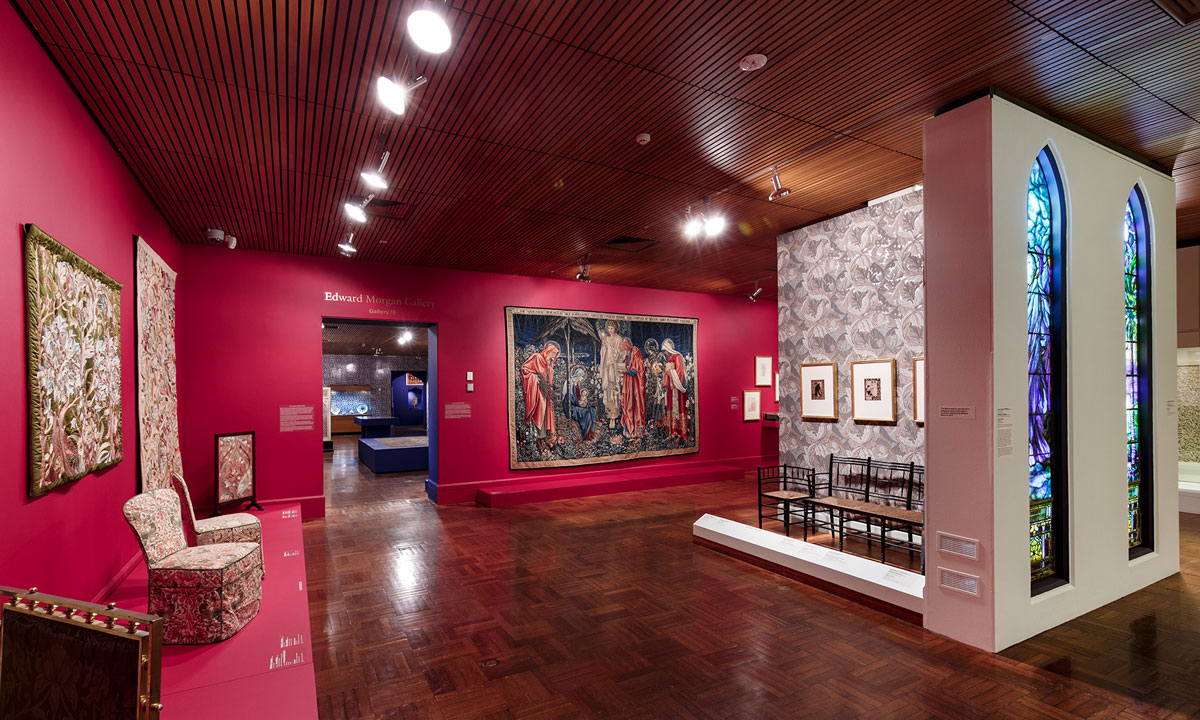 The most substantial change to Gallery 18 is the replacement of the Willow boughs wallpaper with new paintwork chosen to complement Morris & Co’s elaborate designs.

Three wallpapers have been used to create breakout spaces in the gallery, and a large-scale image of the interior of one of the Barr Smith homes, Torrens Park in Mitcham, has been used to demonstrate in situ their extensive use of Morris furnishings.

A sitting room tableau (see photo at top) has been created and displays items which were once in Barr Smith homes, including the carpet and armchair designed by JH Dearle, and James Powell & Sons glassware.

The gallery also features complementary works including prints by Aubrey Beardsley, William de Morgan ceramics, and the AGSA’s masterpiece Tiffany stained-glass windows, Angel of Faith and River of Life, which form the centrepiece of the display.

Leanne Santoro is Curator of Decorative Arts and Design at the Art Gallery of South Australia.