The latest of the ABC’s Unravel true crime podcast series, The Snowball tells the tale of an alleged conwoman from California who won the heart of a Kiwi bloke in London, moved to New Zealand to marry him, then abruptly debunked to the US, leaving his family broken and broke.

From the start, it sets a very different tone from previous Unravel podcasts dealing with suspicious deaths and missing person cases. That’s partly due to the narrative and the bizarre tall tales around which it revolves, but also because it’s delivered with a liberal dose of Kiwi-isms and laconic humour (check out the video trailer for a taster).

The Snowball is hosted by Triple J producer Ollie Wards, for whom the story is personal – it was his brother Greg who ended up entwined with the glamorous “Kim Kardashian look-alike” named Lezlie Manukian after meeting her at a party while he was backpacking in the UK.

In the opening episodes, self-declared Americanophile Greg recounts their whirlwind romance and how he was captivated by her exotic lifestyle. Just as quickly, it all fell apart – but not before his parents had backed a restaurant venture by Lezlie that ended up costing them more than a million dollars and leaving them homeless.

After she’d gone, the Wards tried to figure out which stories Lezlie told them were true and which weren’t, but much is still a mystery when Ollie begins his investigation years later.

The story, to quote the ABC podcast notes, “has more kooky plot twists than a Hollywood movie” – from strange goings-on involving a club in Hawaii, to claims of forgery and theft, a multi-million-dollar trust fund, a supposed book deal and movie involving a Hollywood star, email snooping, and a mysterious lawyer who shares the real name of escape artist Harry Houdini.

There’s an unavoidable bias in Ollie Wards’ recounting of the story, but his connection to those at the centre of the drama is also what makes it so entertaining. Ultimately, he does track down the mysterious Lezlie, but you’ll have to listen to find out whether it provides any closure. 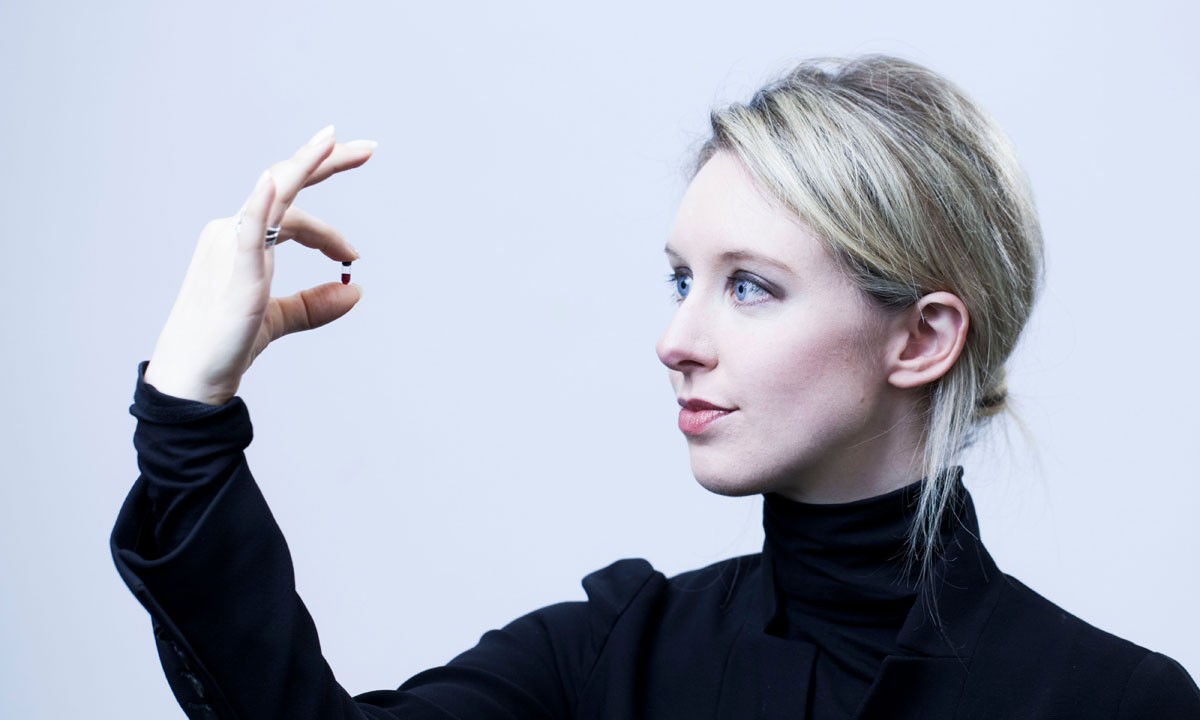 Elizabeth Holmes holding a nanotainer of blood at Theranos headquarters in 2014. Photo: PA

Elizabeth Holmes is also now widely viewed as a conwoman, but she was once touted as the world’s youngest self-made female billionaire and possibly even “the next Steve Jobs”.

At just 19, she founded the American biotech company Theranos, which claimed to have revolutionary technology that could carry out multiple blood tests using microscopic amounts of blood from a finger prick – a breakthrough which would “change health care forever”.

So far, so good … and many people jumped on board.

What Holmes lacked in formal medical or scientific qualifications, she more than made up for with charisma and chutzpah, with the hype surrounding Theranos convincing investors – including wealthy businesspeople such as News Corp’s Rupert Murdoch – to part with millions of dollars. At its peak, the company was valued at $10 billion.

But there was a problem: the technology didn’t actually work.

Six-part podcast The Dropout, presented by Rebecca Jarvis of America’s ABC News, tells the incredible story of the rise of Holmes (who became CEO of Theranos after dropping out of Stanford University); the alleged culture of intimidation, secrecy and shady business practices that enabled the company to hide the unreliability of its technology, and the way in which it was eventually exposed through an unlikely whistleblower and a dogged journalist.

There are interviews with a range of players in the saga, including former Theranos employees (many of whom were poached from Apple). Holmes’ voice is also heard through speeches recorded at the height of the company’s success and court transcripts following its demise.

The podcast explores her single-minded ambition and the smoke and mirrors surrounding the business, but the most fascinating takeaway is just how easily so many supposedly smart, rich and powerful people (mostly men) were taken in by it all.

Even if you’re familiar with the story, the podcast still makes for entertaining listening. And the case isn’t closed yet: both Holmes and Theranos’s former chief operating officer are currently facing charges of “massive fraud” for claims made in relation to the company, with a trial scheduled for August next year.