The Muslim artist’s delight in the infinite variety of patterns possible through mathematically-derived configurations is eloquently illustrated in the Pair of doors with geometrical design now on display in the exhibition No god but God: The Art of Islam at the Art Gallery of South Australia.

This recently acquired work of art, gifted by the gallery’s Foundation Collectors Club, originated in Morocco, the western region of the Islamic world known as the Maghreb or “the place where the sun sets”.

The highly ornate pair doors would have served a very practical function as the entrance to a private mansion. They consist of two separate sections – a smaller door, inset on the right panel, was for everyday use, while the larger doors were likely opened only on important occasions such as festivals or for important visitors. They display numerous repairs indicating their use over a long period of time. 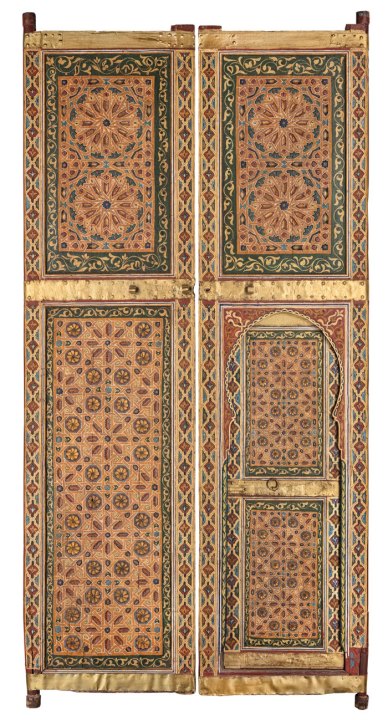 The long history of Islam in the Maghreb imbues Pair of doors with special significance as representative of the ancient heritage of its aesthetics.

Northern Africa was among the first lands outside Saudi Arabia and the Middle East to embrace the religion, and this occurred through its spread along trade networks, within decades of the Prophet Muhammad’s death in 632 CE.

Nowadays, the geometrical designs on Pair of doors are often interpreted as alluding to the theological concept of Tawhid, meaning the absolute Oneness of Allah. The idea is that such mathematically derived patterns contain the possibility of infinite extension throughout all directions in space – thus they allude to the eternal indivisibility of the Divine.

Nevertheless, the origin of the patterns more likely derives from the fascination of early Muslim scholars with ancient Greek mathematics.

It was through medieval Islam that much ancient Classical knowledge was preserved and passed onto the West. This is evidenced in the many Arabic words connected to the study of mathematics, such as algebra and algorithm, which have entered English.

The Arabic decimal digit system is now also used in the English language.  The year “two-thousand-and-nineteen” is far less cumbersome written with the Arabic-derived digits 2019 rather than the ancient Roman MMXIX numerals.

James Bennett is curator of Asian Art at the Art Gallery of SA.  Off the Wall is a regular InDaily series highlighting  gallery treasures.

No god but God: The art of Islam is the AGSA’s largest and most expansive display of Islamic art to date, spanning 12 centuries and the geographical breadth of Morocco to Australia. Pair of doors was a gift to the gallery by Joan Beer, Colin Cowan, Nick and Fiona Grieve, Adam Gwinnett, Lipman Karas, Mark Livesey QC, Leo Mahar, Diana McLaurin and Judith Rischbieth through the Art Gallery of South Australia Foundation Collectors Club 2018.