North/South – premiering at the Adelaide Festival Centre next week – is described as an artistic experience “centred around one very significant and current question: survival”.

Featuring two works that act as a kind of allegory for issues surrounding climate change, the show is the brainchild of ADT artistic director Garry Stewart and follows a number of other recent works he has created based around ideas related to nature.

While he has choreographed South himself, Norwegian choreographer Ina Christel Johannessen created North.

“Clearly climate change is one of the biggest issues of our time, so I thought it would be interesting to juxtapose the position of a choreographer from the Arctic Circle with someone working in the southern hemisphere,” he tells InDaily.

Johannessen, who has her own Oslo-based dance company Zero Visibility Corp, did an artist residency several years ago at the Svalbard Global Seed Vault – a secure vault built inside a mountain on a remote Norwegian island which houses the world’s largest collection of seeds in case of a major regional or international crisis.

After flying to Norway to see her resulting dance work, Frozen Songs, Stewart commissioned her to create North for the Adelaide-based ADT.

“It [Frozen Songs] was beautiful and I loved it … her feeling was that the seeds told the story and so embedded in these frozen seeds were these songs about history and humanity.”

Johannessen has said that North, which sees a collection of diverse characters trapped in a bus shelter during an Arctic blizzard, also takes inspiration from her time as Svalbard, which was home to a community of people from myriad cultures and countries.

Stewart’s South, to be performed by the same group of nine ADT dancers, references Australian explorer Douglas Mawson’s expedition to Antarctica in 1912 – in particular his ill-fated journey to map the western shelf as part of a three-man sledging team including Xavier Mertz and Belgrave Ninnis. Disaster struck when Ninnis, six dogs and many of their supplies fell down a crevasse; the other men turned back to base, but Mertz died on the way (there’s speculation he suffered vitamin A poisoning after eating one the huskies).

“It was an incredibly challenging journey for Mawson because he was responsible for this entire journey and he had lost two of his men and then faced enormous odds to get back to the base huts before winter set in,” says Stewart, who became increasingly fascinated by the story after reading Mawson’s autobiography.

“Mentally and emotionally, it would have been unbelievably trying.

“It’s an interesting story of fortitude against adversity, but also it’s an allegory for our times in some ways – the challenges of humanity versus the forces of nature and the despoliation of nature as well.

“That’s something Ina reflects on in her piece as well. She lives in the Arctic Circle so she witnesses first-hand the phenomenal speed at which melting is happening of glaciers and the ice coverage of the Arctic Circle.” 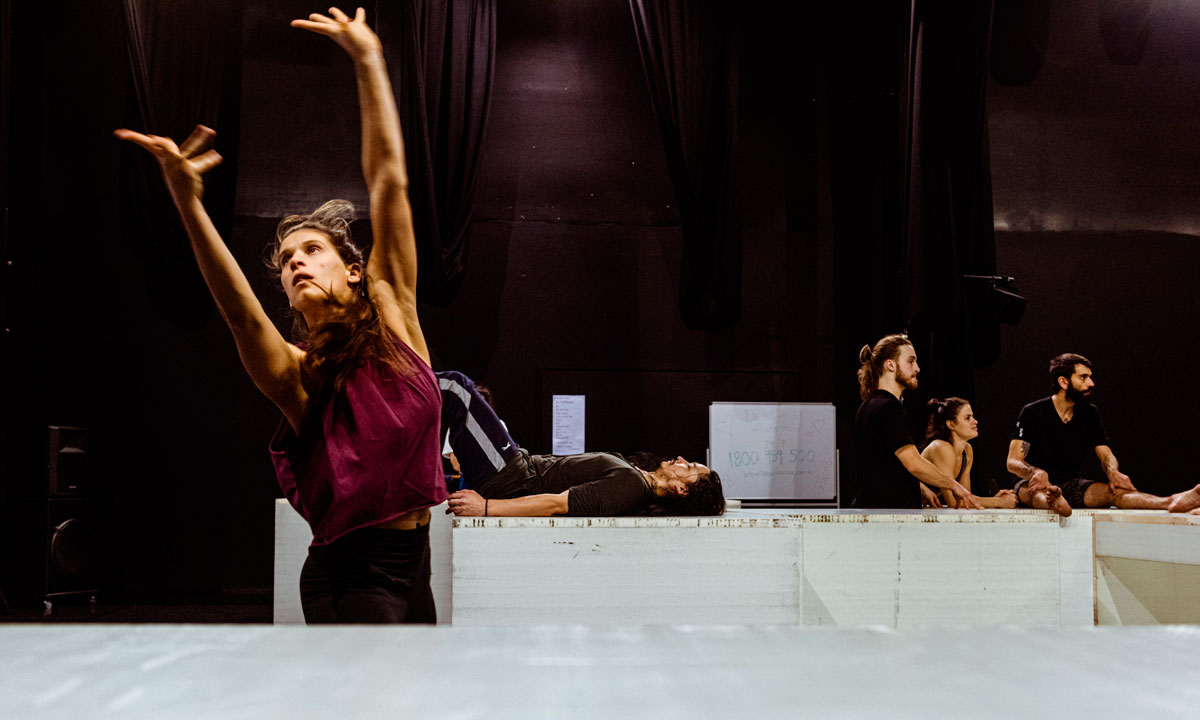 The staging for North features a bus shelter with a large street lamp next to it, while South will be presented on a set with nine large white cubes that represent the land mass of Antarctica as well as icebergs, ice sheets, shelter, crevasses and other features of the landscape.

Given the fascinating light phenomena of the Aurora Australis and Aurora Borealis, lighting is an important feature of both works, Stewart says.

The score for his own work, created by composer Brendan Woithe, references the sounds of the frozen continent – such as ice cracking and powerful winds – as well as the epic nature of Mawson’s journey.

“In South, there’s certainly at the beginning the sense of journey and expectation,” Stewart says of the feelings the dance evokes.

“Obviously there was a certain kind of heroism and bravura behind those kinds of explorations and expeditions, but then that all unravels fairly quickly as Mawson is confronted with the death of his companions, then there’s the sense of loss and horror as well as the brutality of the environment.

“It shifts quite a bit – emotionally and in terms of the tenor and tonality of the work, it does have enormous contrasts.

“There’s also a sense of wonder and awe at nature and the beauty of the landscape.”

Johannessen spent a month in Adelaide last year for the initial development of North, and has returned for several weeks in the lead-up to the premiere season of North/South.

While the two choreographers are working with the same dancers, Stewart says they have developed their pieces quite separately.

“It’s been really interesting to see how two choreographers from different parts of the world with a different cultural history set about responding to these ideas about nature and the environment and the human footprint within it.”

North/South will be presented by Australian Dance Theatre at the Adelaide Festival Centre’s Dunstan Playhouse from September 11-14.