Print v Pixels, photographed on the beach at Sydney’s Double Bay on Sunday, was organised to coincide with the opening tonight of an exhibition of Baines’ work in a gallery in the harbourside suburb.

“I was trying to highlight the potential demise of the print media, so I thought I’d put people in the ocean reading newspapers dressed up in suits, because that’s one of my trademarks,” the artist says of the installation.

Around 30 volunteers took part, with each asked to bring along a newspaper of their own choice.

Baines did a similar installation at Henley Beach some years ago, but without the same intended message. He says Print v Pixels was inspired by the changing media landscape – including the closure of regional newspapers and the growth of alternative media forms that don’t necessarily conform to conventional press standards.

“I personally hope [print] newspapers don’t disappear … but I want to encourage people to think about it.” 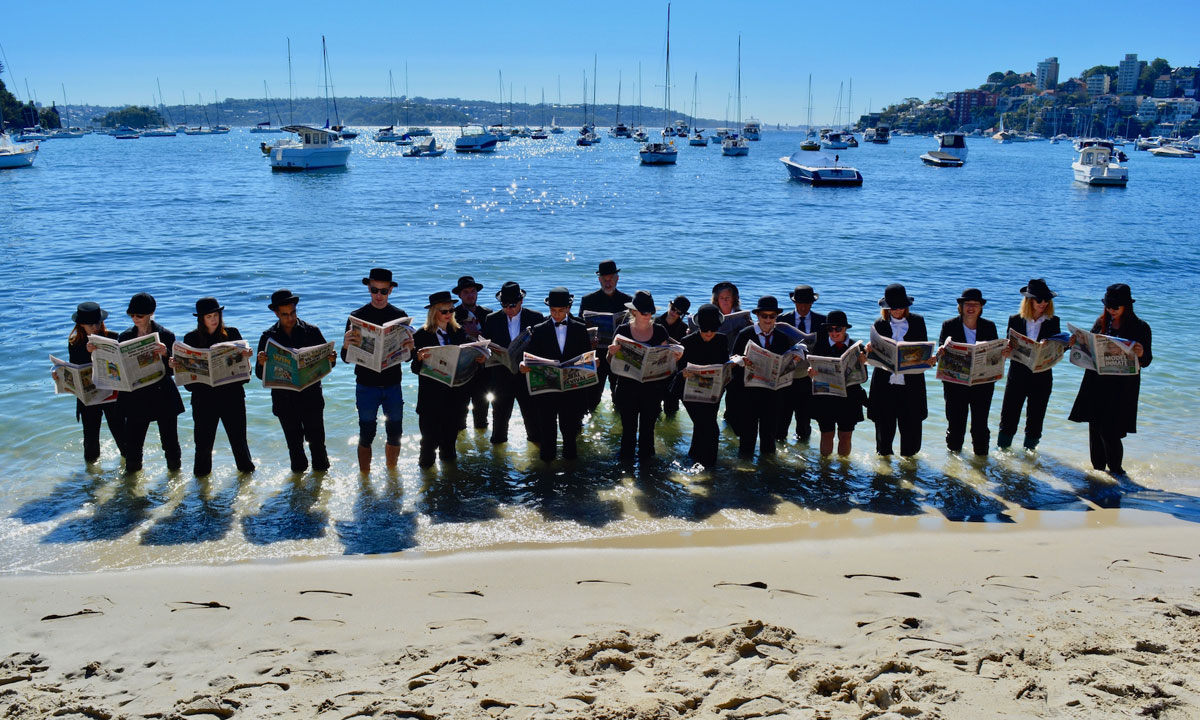 As with his other installations, Baines – a two-time finalist in the Doug Moran National Portrait Prize – will ultimately create a painting from Print v Pixels.

He has previously created a number of other “human sculptures” on beaches, as well as a series featuring dairy cows, including one at Double Bay last year: “There were just two cows for that one, but they were big and very messy.”

Sunday’s installation and photoshoot took an unexpected turn when it was photobombed by a small boy who was playing on the beach and ran past the newspaper-reading volunteers.

“I quickly took as many photos as I could,” Baines says. “I love it when things like that happen … it adds another dimension.

“He just looked oblivious to everything … he had his schedule and he wasn’t going to stop.”

Baines has two further installations coming up later this year, including one in Adelaide for the not-for-profit Sight for All, which will see people wearing blindfolds and sitting in chairs looking out towards the ocean at Henley Beach. It will be followed by a project in Perth raising awareness for Mental Health Day.